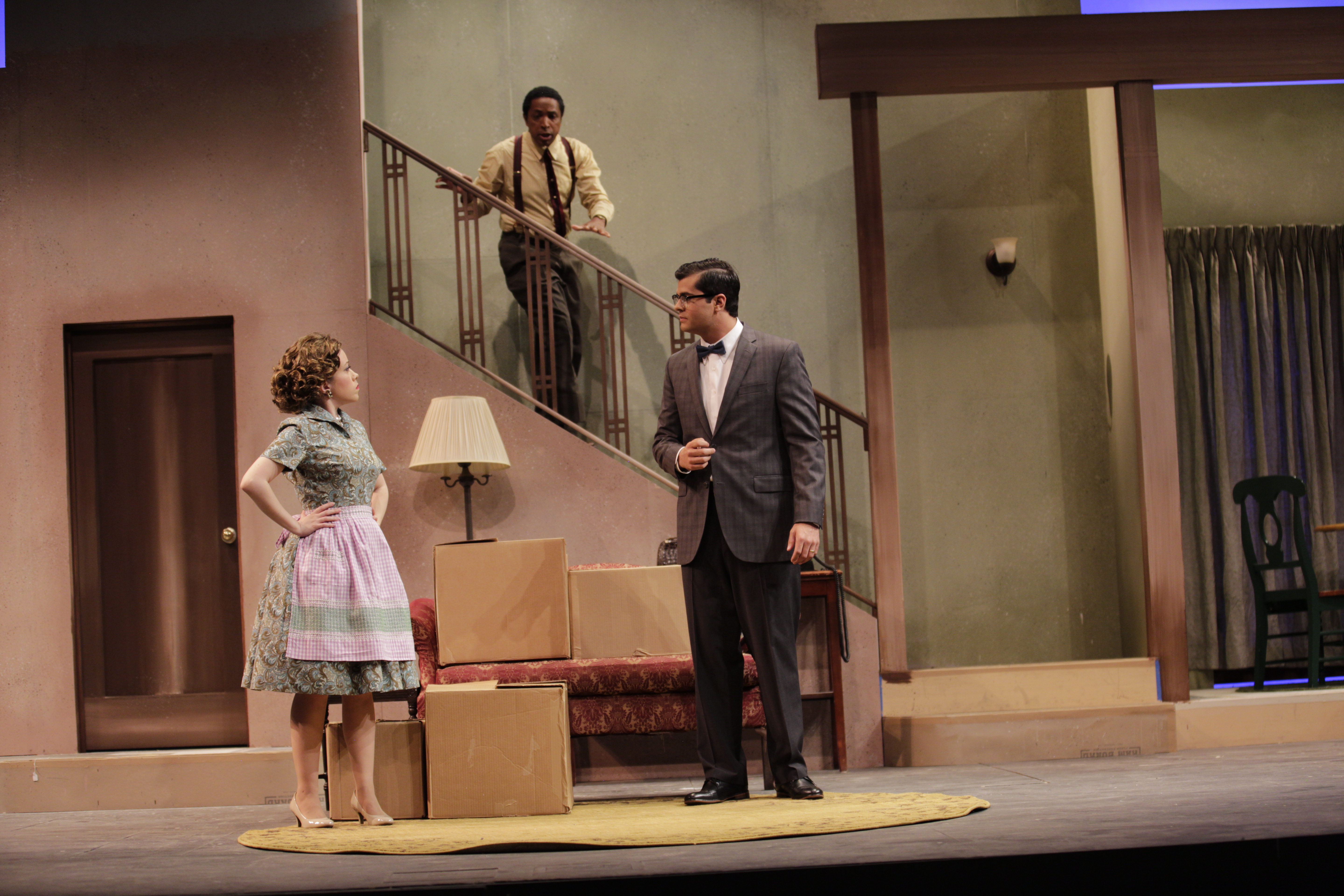 Trapped in a charming mid-century modern bungalow, familial burdens surround former parents Bev and Russ as they pack up their home, from Clybourne Park to anywhere else.

“Clybourne Park” written by Bruce Norris, follows the story of a house and the ever-changing world around it. Norris pulls no punches in this brilliant gut-wrenching monster of a play.

Midway through the civil rights movement, current owners Russ and Bev suffer the loss of their son and decide it’s time for a change of scenery, inadvertently selling their home to a black family which their white neighbors have a problem with. Fast forward 50 years and we focus on Steve and Lindsey, a white couple trying to relocate into the now black up-and-coming neighborhood of Clybourne Park.

Esdras Toussaint has directed a masterwork that this generation needs. While the future is always going to be important, it’s also essential that we take a hard look back at how we got here. The parallels in these two timelines are as ominous as they are frequent. This powerful, touching, funny and enraging play is as complicated as the life it mimics.

Both acts are slow to start, beginning with meaningless conversation and trite politeness halted by a passionate explosion of heavy topics. This cleverly shows the audience how tense everyone is just under the surface.

Matt DeHaven stole the show with his performance as Russ. A broken man who is still mourning the loss of his son, DeHaven commanded the stage and exploded with emotion. Russ realized there was nothing left for him in Clybourne Park and made his sorrow and grief crystal clear to all.

DeHaven as Dan, a silly and light construction worker, plays a deceptively large role. Dan is directly responsible for one of the biggest pieces of symmetry in the entire production and DeHaven delivered beautifly.

Elyse Hamilton as Bev breaks the hearts of anyone with a mother. Her transparent cheeriness and infinite attempts to help her husband are a sign of someone just trying to survive. Without a career or a child to care for, Bev doesn’t really have anything left to do besides trying to discover the origin of neapolitan. In an effort to calm her loud mind she tries to expedite the move by frantically packing and giving away anything she can’t pack.

Hamilton as Kathy is a standard shark of a lawyer, while not too important to the story. She does a great job nonetheless.

Erika L. Holmes as Francine was the embodiment of stoicism for people of color in the 50’s. Constantly being shut out or talked over by her white employer, smiling politely at every insulting insinuation, while Bev simultaneously insists they are “friends.” At times it seems as if people of color are ghosts, just existing as talking points for their white counterparts.

Holmes as Lena through no one’s fault but society’s seems eerily similar to Francine. Despite not working for anyone in the room she still gets glossed over as her white counterparts discuss trivial facts about geography. Holmes did an excellent job displaying the unending patience a black woman is expected to have to refrain from being dismissed as angry.

Stan McDowell as Albert was playfully simple, a clear compliment to Holmes as Francine. Not quite comedic relief but entertaining. Always ready and willing to help, Albert’s gregarious nature led him to miss his wife Francine’s cues to leave and entangle himself in the problems of his white peers. After the 50-year fast forward, Kevin retains much of the same nature as Albert, no longer being socially-gagged Kevin is free to engage in the indelicate art of racist jokes with the insensitive Steve.

Trevor Figueroa gave a baffling performance as Karl and Steve, the audience hung on his every word for all the right (and wrong) reasons. Karl, a homeowner in the same neighborhood as Bev and Russ feels a moral obligation to tell them that the family that bought their home is Black, an invitation for trouble in Karl’s eyes.

His asinine arguments earn him an invitation to leave from Russ, but with white male entitlement being all the rage in 1959, he feels he is being silenced and that his first amendment rights are enforceable on someone else’s property. Karl presents his thinly veiled racism as a concern for his neighbors and demands the sale of the home be rescinded or at the very least the home be in the possession of the bank.

Steve is a man forced into fatherhood, and is now trying to make the best of the situation at hand. An average man with strong beliefs loosely held gets upset at the accusation that his presence in a black neighborhood could ever be anything other than positive. His is the character that breaks the silence and opens up the dialogue of race that ultimately ends up with unfunny jokes being hurled back and forth. It’s an amazing car crash that you don’t dare look away from.

Megan Milo as Betsy was irritating to watch. Betsy, the pregnant wife of Karl was just that and little more. It seems as though the entire purpose of this character was to exemplify how troublesome it is for hearing people to communicate with this caricature of a deaf person.

The other characters hover about having conversations about her, without her. And her husband, the only one who could translate for her, abandons her. The punchlines and laughs are at her expense. While the script calls for a deaf accent, the responsibility is on Toussaint as the director and Milo as the actor for indulging the punching-down of Betsy.

Milo absolutely nailed the role of Lindsey. The two lines ‘Half of my friends are Black!’ and ‘I used to date a Black guy’ are time honored favorites of white women who don’t want to be called racist. Women are generally more tactful than men and Lindsey relied heavily on this skill while voicing her concerns.

Nickolas Caisse as Jim, a well meaning leader of the local church in Clybourne Park, was ironically a voice of tolerance and held progressive views for a clergyman in the late 50’s. Instructing the tactless Karl to love his neighbor, and treat them as their own. Jim is hopeful yet realistic when offering help to the distressed Russ. Caisse brought life and powerful emotion to all his roles. A talented actor for truly demanding roles.

“Clybourne Park” runs through May 6 on the Pierce College Performing Arts Mainstage. Tickets are available through brownpapertickets.com.