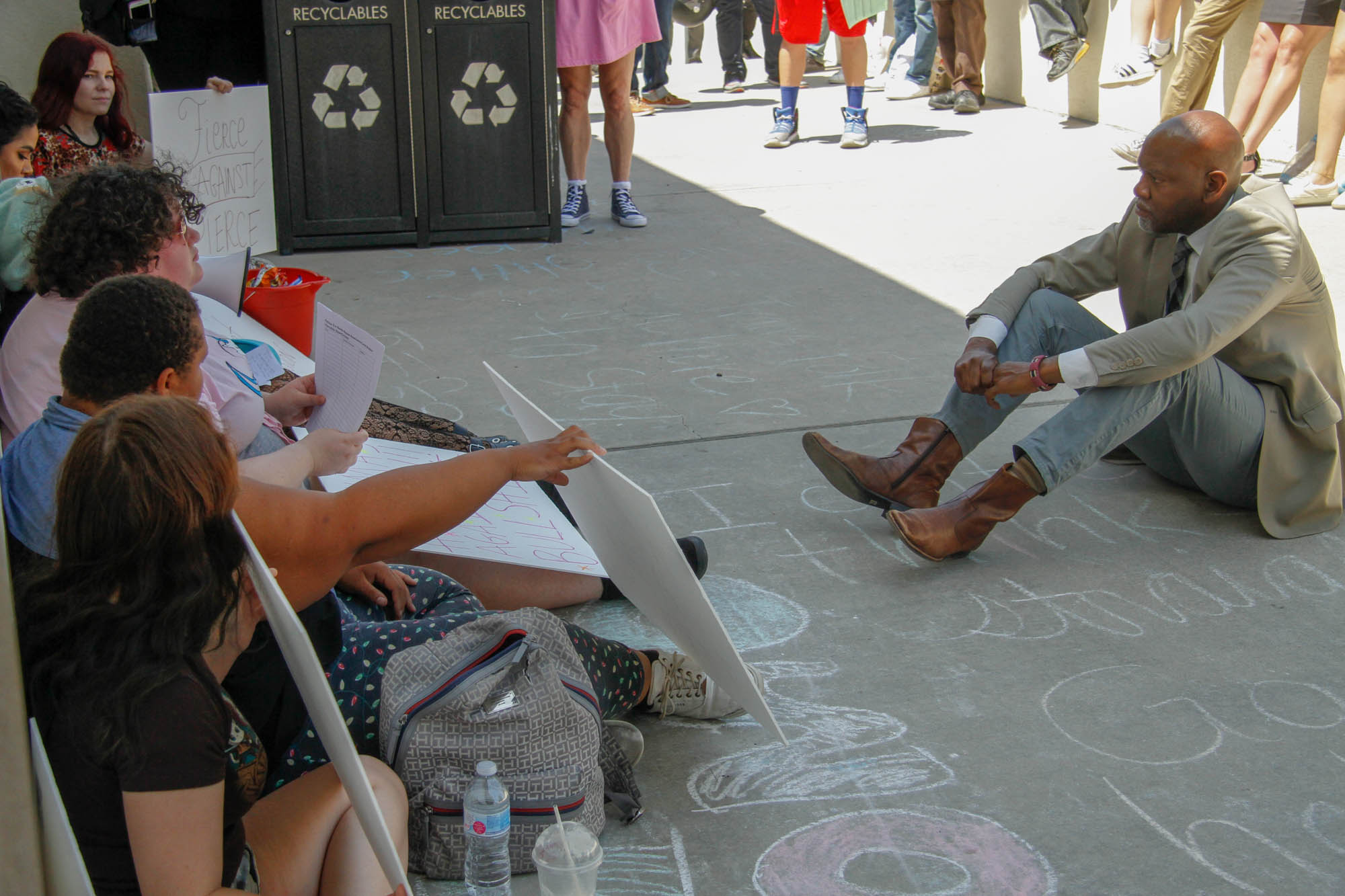 Seven students marched down the Mall carrying white signs, shouting their discontent through a megaphone, then proceeded to sit on the ground in front of the Great Hall and voice their concerns and demands to improve community and academic conditions for Pierce College students.

The Queer Brahma Collective spoke against college administration during a sit-in protest at the Great Hall on May 10.

Gabrielle Castleberry-Gordon, the president of the Queer Brahma Collective, said the protest was organized to inform and create change.

“Our main goal was to raise awareness to the faculty, staff, and administration about some of the issues students face just trying to go to school here,” Castleberry-Gordon said.

Nate Mendoza, a member of the Queer Brahma Collective, said administration was “all talk” and no action. Mendoza said their demonstration was necessary and successful.

“I actually feel very empowered by the fact that the Queer Brahma Collective were able to pull this off and get together,” Mendoza said. “It took a lot of bravery, organization and resistance. We’re really proud of what we’ve accomplished.”

ASO President Efren Lopez said he was surprised that the flier circulated by the Queer Brahma Collective about the planned demonstration listed ASO as a contributor to the overall problems at Pierce College.

“I was confused because ASO has had all these talks about the administration and the district too,” Lopez said. “And we funded them for their first Pierce Pride event, but I think it’s a good thing that they did this right away.”

ASO senator Gisela Tarifa asked to speak during the protest. She said she’s had trouble promoting events on campus that she thought should have occurred.

Tarifa said that sometimes she didn’t receive answers and she felt as though she was overlooked. She said that she understood how that could happen, although it was infuriating to her.

“Doing a lot of things on campus this entire year has been really tough, really hard to get a lot of help and a lot of faculty and administrative support,” Tarifa said. “Sometimes I didn’t get my emails responded to, sometimes I wasn’t even informed, sometimes it was as if they didn’t even exist when I had it months and months planned.”

Mario Macias, the co-adviser of the Queer Brahma Collective, said he supports student clubs and understands the concerns they might have.

“I’m aware of some of the bureaucracy, and I can understand the frustration with the pace of the system,” Macias said. “But sometimes, it’s a systemic problem rather than a one-person or one-department problem.”

Dean of Student Engagement Juan Carlos Astorga was a witness to the demonstration. He said it is important that administration know the student perspective to solve college concerns.

“It’s upon us to take a step back and be able to listen, hear critically what they want us to know, and be able to work on those things and give them an update on what we’re currently doing, what we’re trying to do and bring back some of the feedback,” Astorga said.

Astorga said it’s important for students to voice their opinions and for faculty to listen.

“It’s a wonderful opportunity for our students, our Queer Brahma Collective, to really express themselves, and speak true to power,” Astorga said.

Castleberry-Gordon said that they want to make sure administration knows that community college students should be valued. She said Pierce isn’t just a place that students attend for two years and then transfer.

She said Pierce students should be able to host events, use the library, have reliable Wi-Fi throughout campus, and have access to basic resources that are available at four-year institutions.

Macias said students were concerned about student life and issues that may impede success on campus. He said some issues that stood out to him were the frustration and discontent about organizing events, the lack of student resources for marginalized groups, and a lack of sufficient mental health resources.

“They touched upon a lot of issues and problems that I was aware about already, but it’s still useful to hear them being articulated from students themselves,” Macias said. “I’m glad that they were able to create a space for themselves to express these concerns, not only to other students, but to the administration and faculty.”

Castleberry-Gordon relayed a list of concerns and demands that she collected from students, which included a call for better training for club fundraising.

“My first immediate response is, we have a lot of work to do. My second immediate response is, although this is a group of seven, they speak for many on campus,” said Vice President of Student Services Earic Dixon-Peters. “A lot of students feel the same exact way. They touched on a variety of issues. As we continue to work with our students, we need to get feedback from them.”

Dixon-Peters said that students felt that they had to protest and yell to feel like they were being heard.

“Unfortunately, it got to a level that they had it, they were done, they were fed up. And they felt they needed to do a sit-in to get our attention even more,” Dixon-Peters said. “Which means even though I’ve met with them a few times, my response wasn’t good enough, and I understand that.”

Mendoza said the Queer Brahma Collective members decided to protest during the Film Club’s movie screening event only because it was the upcoming ASO-sponsored event. Blah said they appreciate the Film Club’s understanding.

“I’m pleasantly surprised with the turnout, I was surprised to see administration who have been neglecting us present, and I was really happy to see the Film club stand in solidarity with us despite that this may have inconvenienced their event,” Mendoza said.

Film Club President Andrew Shaktah said that Ken Windrum, the club adviser, called him after receiving an email from the Queer Brahma Collective explaining the plans and intentions of the demonstration.

“That’s all we really knew, and I was a little worried that maybe it might get in the way of our event. But when I read their emails to me, I appreciated how respectful they were. I understand their motives, and I fully support them,” Shaktah said.

Though he agrees with their stance, Shaktah said he wanted to give them the opportunity to speak for themselves and be heard.

“I wanted to step aside and support them and let them know it is being heard,” Shaktah said. “In the end, I really do think it should be their voices. I’m really honored to stand next to them, but I’m not going to stand for them.”

As part of their list of demands, the Queer Brahman Collective asked for mandatory LGBTQ safe zone training for faculty because some students said they have been disrespected. They said some faculty were unresponsive to their calls and emails, and administrators invalidated students with special needs.

Macias said he saw faculty and administration taking notes during the protest. He said he thought that the administration was actively listening to the students’ concerns.

“It’s always good to voice this out because we need to remind administration that students are still struggling here on campus, and maybe the pace in which they are seeing improvements is not fast enough,” Macias said. “Most faculty care about the well being of students. Not every faculty member is well equipped to handle the struggles of students, but in general, I feel like we try to teach ourselves and train ourselves how to better help our students.”

Astorga said that administration needs student response to gage how well it is doing.

“One of the most amazing recommendations that they had that resonated for me was having the students be a part of the decision-making to develop a climate survey for students,” Astorga said. “What are we doing right, what do we need to do better, and how can we do it better?”

Tarifa said her position on campus exposed her to another side of administration that students are not aware of because they aren’t a part of senate.

“Being a part of student government, I learned a lot of the insider parts to bureaucracy, especially the administration here on campus,” Tarifa said. “A lot of our faculty members are not paid enough, and they’re not staffed properly. That is an issue that has to do with our board and our district.”

Tarifa said the  burden falls on the Board of Trustees and the district, and they need to support the school.

“It is up to the board. It is them. They are the ones that are able to allocate the proper funds to make sure what is passed and what resources we need on campus are available to us,” Tarifa said.

Astorga said that students decided that their needs were not met, and they decided to organize.

“They found themselves facing certain levels of bureaucracy, and they felt compelled to say, ‘Enough is enough. We want to be heard.’ I think they have every right to say that,” Astorga said.