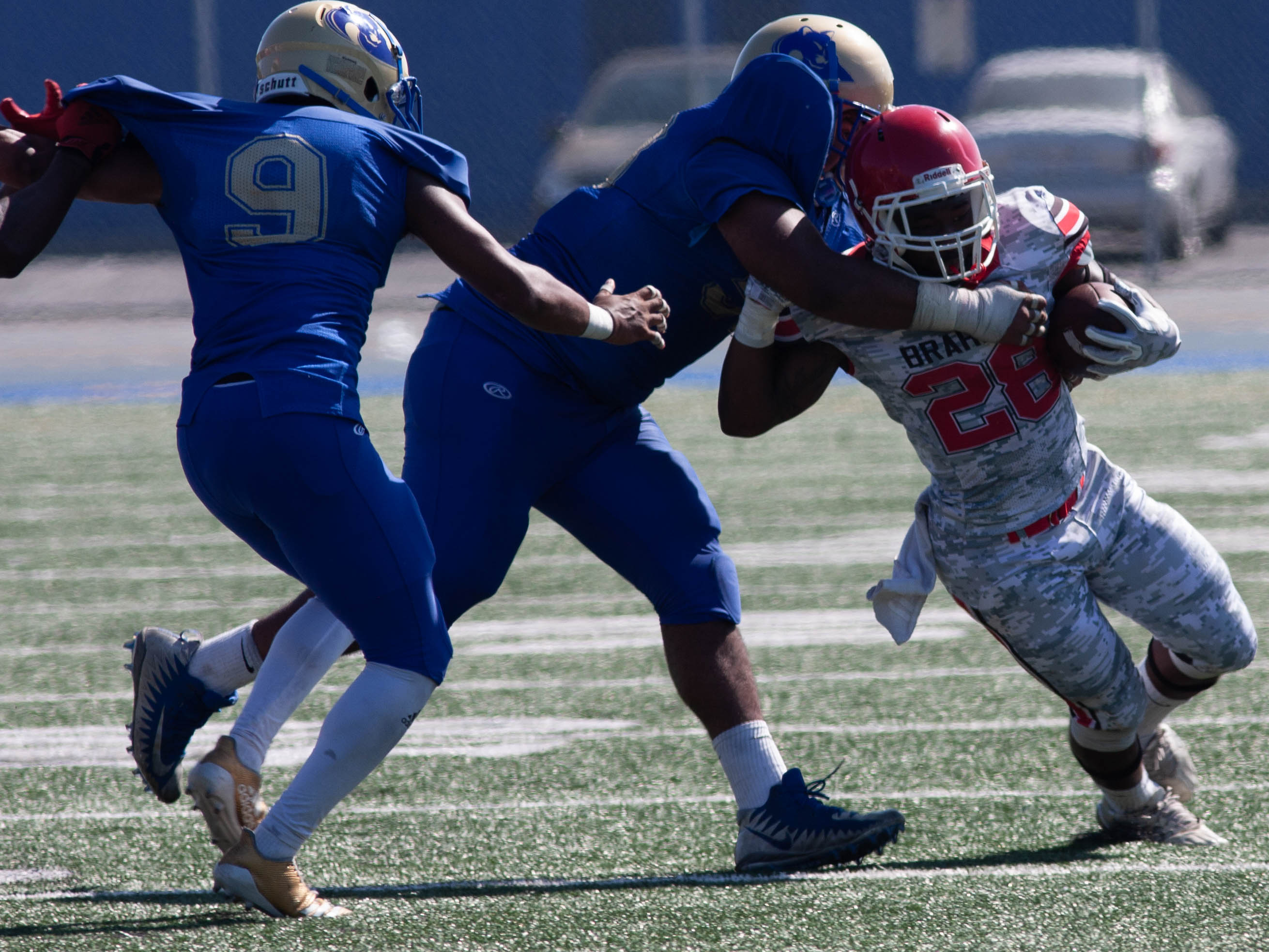 It may not be standard math, but that was the equation for the Brahmas Saturday when they traveled to face the West LA College Wildcats.

The Brahmas got out to an early lead aided by great field position to start. A squib kick and an unsportsmanlike penalty on the opening kickoff gave Pierce the ball across midfield on the Wildcats 45.

Pierce drove down to the West LA 1-yard line, but went no further. The Brahmas lined up to go for it on fourth and one, but a false start penalty forced the kicking unit out on the field. Williams Peña knocked in the 23-yard field goal to give the Brahmas a 3-0 lead.

Near the end of the first quarter, Wildcats quarterback Markell White gave West LA the lead on a one-yard touchdown run.

West LA added a field goal with less than two minutes to play in the first half to go up 10-3.

Saavedra led the Brahmas back down the field in less than one minute, scoring on a 15-yard run where he dove for the pylon.

“I felt the rush from the inside, tried to roll out, I almost fell to be honest,” Saavedra said. “I just saw the pylon and did whatever I could to get in the endzone.”

The ensuing extra point was blocked by the Wildcats and returned for two points, giving West LA a 12-9 lead heading into halftime.

The Brahmas offensive strategy switched up in the second half. In the first game of the season and the first half against West LA, coach Woods rotated quarterbacks Saavedra and Kwon Peterson every two drives. At the start of the second half, Woods decided to go with Saavedra.

“Whenever you rotate quarterbacks it’s difficult. You have to get into a rythme, you have to feel the game out, and you can’t do that within two drives,” Saavedra said. “The fact that they had the confidence to get me in the game, it just gave me more confidence and allowed me to settle into the game and really see what the defense is trying to do.”

Saavedra rewarded Woods’ confidence in him, finishing the game 19-28 for 239 yards, one touchdown and one interception.

“We got really fortunate with multiple good quarterbacks,” Woods said. “We try our best to rotate our guys, but at the end of the day you have to go with the hot hand, and I felt like Jonny had that hot hand.”

At the start of the fourth quarter, the Brahmas were driving in West LA territory. A fourth down pass interference call on the Wildcats kept the drive alive, and gave Saavedra the opportunity to give Pierce the lead.

Saavedra connected with receiver Giomanni Perez in the back of the endzone from 11-yards out, giving the Brahmas a 16-12 lead with 13 minutes left in the game.

“I knew once he got that outside leverage and goes to that corner he’s going to be open,” Saavedra said. “So I just tried to look off the safety, come right back to it, and it was there.”

A couple failed field goal attempts by Pierce, one missed and one blocked, kept the Wildcats in the game, and gave them the ball with 2:28 left to play on their own 33-yard line.

White drove West LA down the field, breaking away for chunks of yardage, but an interception from Dimetri King in the endzone sealed the victory for the Brahmas.

“As an overall defense we didn’t execute in the first half,” King said. “But the second half we came out and just did our thing.”

Poor execution in the first half was a problem in the first game of the season as well. The Brahmas were down 27-3 at halftime against Mt. San Jacinto College.

“We gotta come out flying, we can’t come out flat,” Saavedra said. “We have to have a fast first half. Three points in the first half is not acceptable, and we almost had that in this game.”