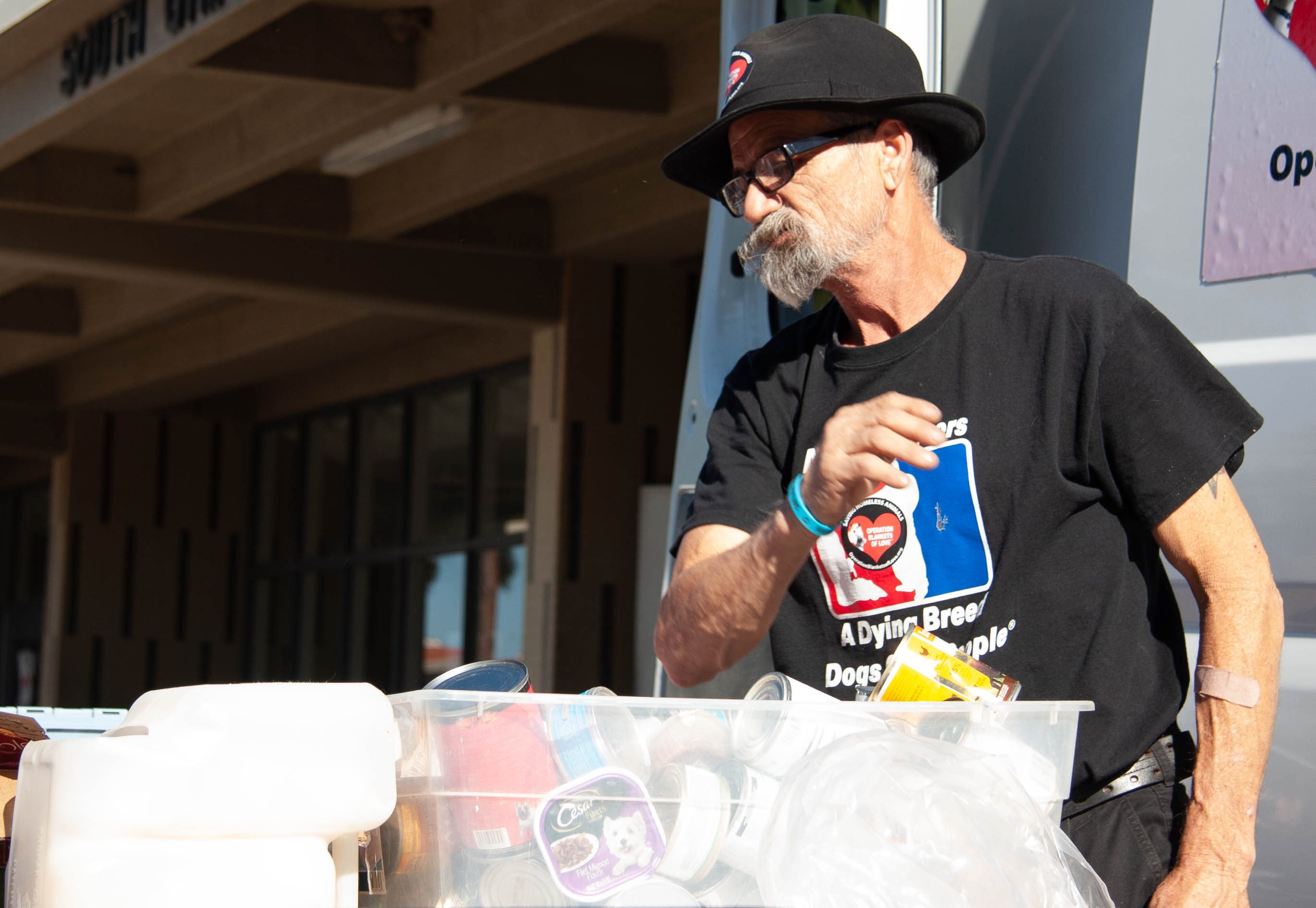 In some households, animals are considered family members.

Operation Blankets of Love and Veterinary Angels Medical Center are working in collaboration to help animals impacted by the Woolsey Fire.

The animals are currently being stationed near the North and South Gyms.

The Woolsey fire has burned over 90,000 acres, destroyed over 300 homes and forced over 200,000 people to evacuate, according to the New York Times.

“We rescue the rescuers,” Smulson said. “We have shelters and rescues primarily coming to us for help. We have an enormous program throughout the county and California helping homeless people with their pets.”

Smulson said their main focus is to help animals stuck in emergency situations.

“This is complete teamwork,” Smulson said. “What is really good is we are able to work alongside the Red Cross, Sheriff’s Department and Mayor’s office. You got all that working together and that’s really important.”

Volunteer Jennifer Sperber said she fosters for multiple rescues and has been volunteering for Operation Blankets of Love over the weekend.

Sperber said it was hard to watch people come in, knowing they left everything behind.

Animals are allowed to stay if they have crates, according to Sperber.

Sperber said she does not have a lot to give financially, but feels like she has a positive impact from volunteering.

“A lot of the people here are really positive, so it has not been hard to stay positive, but I feel for them,” Sperber said. “You have to stay strong and all these people are telling you what’s going on, and they aren’t breaking down, but they are still telling you their story.”

Lori Iacobellis, a volunteer with OBOL, said it is difficult working with those who are suffering from a crisis.

“The compassion side of it is hard,” she said. “It’s hard to see people be grateful when they are in a time of need. Just the humanity of it is hard to digest at times.”

Iacobellis said she volunteers because she knows she would be helping those in need.

“The other thing is seeing the constant flow of donations from people. We get depleted and instantly replenished. It’s like a constant give and take energy that is non-stop,” Iacobellis said.

Iacobellis said when the community suffers, it’s extremely rewarding to be involved and help one another.

“Someone showed up and just gave a tiny little crate and it’s like every little piece matters,” Sperber said. “It doesn’t matter how much you spend or how much you give it could be a single bowl and it is still helping somebody,” Iacobellis said.

Smulson said a couple dozen people have already come to seek help from the team.

“The past couple of days we were bringing supplies to Thousand Oaks,” Smulson said. “150 to 200 animals were stranded in a pet hotel, so they were in over their heads. We brought them the food relief that they needed.”

Smulson said this is their third day stationed at Pierce and they are expected to stay until Tuesday.

He said the team is well staffed and frequently gets rescues coming in.

“I’ve got rescues coming here,” Smulson said. “Rescuers are those that are boots on the ground, they are grabbing the cats and dogs. They know we are set up here, so this a distribution point for the fire region.”

“Whatever we have that goes back to headquarters will eventually find its way to shelters and rescues from Mexico all the way through California and beyond to other states,” Smulson said.

Monetary donations will be accepted online from their website, Obol.info, according to Smulson.

He said the website lists where people can drop supplies off. Smulson also said he encourages people that are in need of assistance to grab anything they can be useful.

“You got rescues and people coming in and out,” Smulson said. “You got people, wonderful community members bringing supplies. they are answering the call and they are the ones who are feeding the rescues throughout LA and Ventura county.”

“Operation Blankets are helping us with all the crates and some supplies then we are receiving our own donations too from people we are reaching out to,” Geekie said.

Geekie said they have worked with Pierce before last year and brought a pop-up clinic back to campus this year after the fires hit.

“We were evacuated from the fires in Agoura. Our practice was evacuated but our non-profit helps in rescue situations like this,” Geekie said.

Kate Graham, the adoptions coordinator for the Little Angels Project, said the team evacuated about 100 animals from the fire, which surrounded their facility.

“We evacuated our practice Thursday night,” Graham said. “We are home to several rescue animals that we board for various rescues in the valley because we also have a non-profit clinic.”

Geekie said they have worked continuously since the fires started.

“Probably since we’ve set up the tent, we have helped 14 animals in three hours,” Geekie said. We will be open for free for the whole week for anyone who has been affected by the fire.”

Those seeking veterinary services can call or text 818-865-1800 for free services, according to Geekie.

“We have to solve community problems within the community so we all need to work together,” Geekie said. “We are going to be here for anybody who needs us for as long as they need us.”