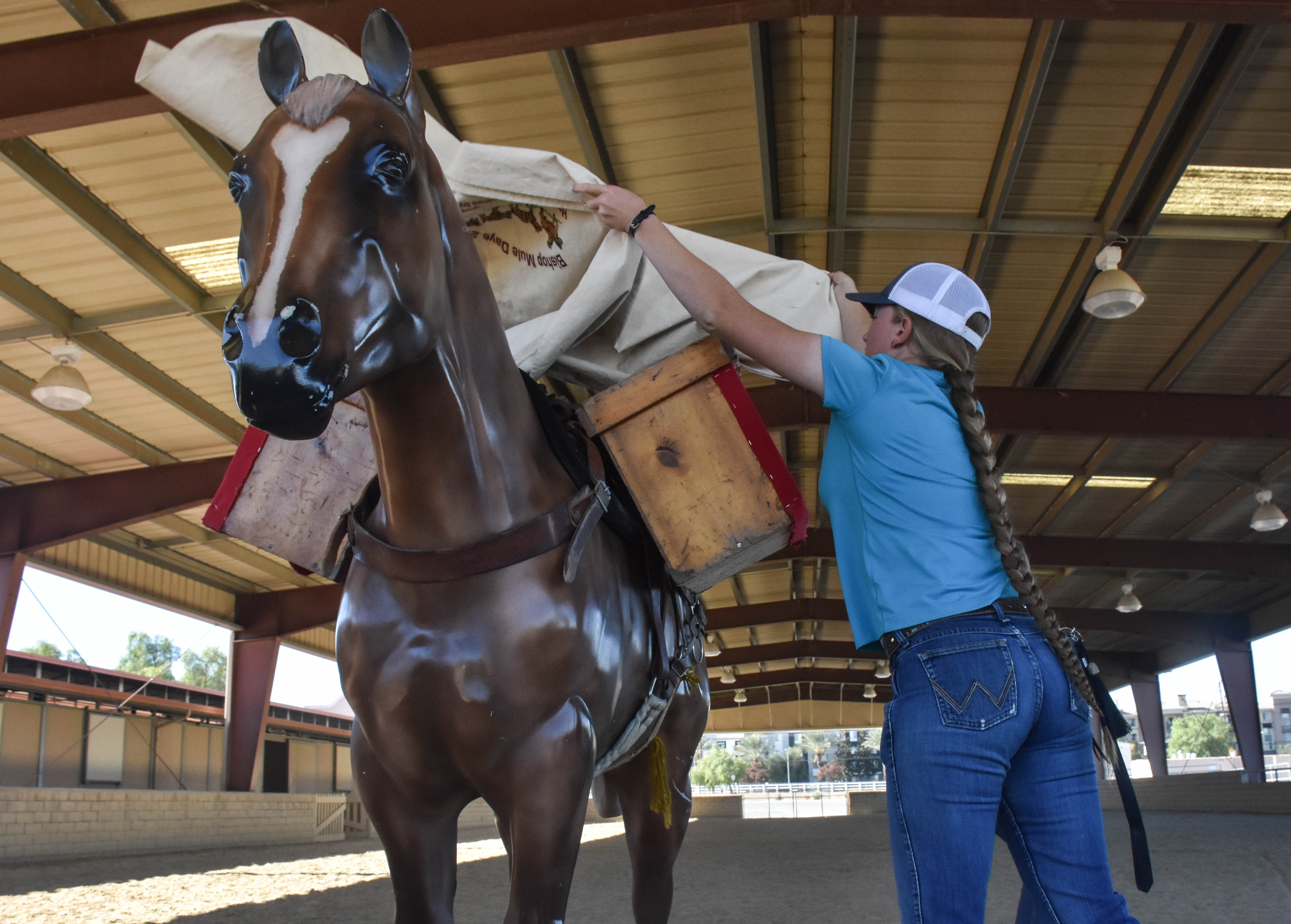 Most clubs on campus are designed to bring people of similar interests together, but one club sends its members across the state for a chance at competition.

Pierce College has added to its agricultural program with the addition of a fairly new club.

The Mule Packing Team Club is nearing its third year with the Associated Students Organization (ASO) to bring a new aspect to equine education.

Tracie Maccanelli, president of the Mule Packing Team, said the club was created last year in the fall semester as a way for Pierce students to compete against other schools and learn about the skill.

“It is really a unique skill to have so we decided to keep it going. We were trying to figure a way out to compete under the Pierce name, so we created the club to keep it going,” Maccanelli said.

She said a full team usually consists of four people with one horse and two mules.

“There are several colleges that come and have several teams. We competed against nine teams last year,” Maccanelli said.

Mule packers must learn techniques and skills such as mounting side boxes to mules and rope hitching.

The comedy load, the pack scramble, the relay race, and mystery packing are a few types of competitions the club participates in.

“The main event that we do is we compete in Bishop California at the Bishop Mule Days on Memorial Day weekend. It’s the 50th anniversary of the Mule Days this year so it’s going to be a big to-do,” Maccanelli said.

The Bishop Mule Days Celebration has been running for nine years and this will be its tenth year in 2019, according to Maccanelli.

The team members compete for timing and accuracy in the interscholastic competitions held each year.

“We’ve competed at the Mule Days for two years in a row. This spring will be our third year competing,” Maccanelli club.

Maccanelli said if new members want to join for competition, they need to be horse savvy to follow important safety protocols with handling equine.

“If you are new to the horse world, you’re more than welcome to join our club, we welcome it, but we would never have you compete. You can come, be an alternate maybe, but just come support us and help us get ready for a competition to get a feel for what’s going on,” Maccanelli said.

She said the club tries to host multiple events throughout the semester to get the word out to other students.

“Last year we had a fundraiser,” Maccanelli said. “We had our presence at any kind of Boots and Saddles or open house. We set up a stand and make our presence known so people can ask questions.”

Emily Kennedy, team member and ASO student representative for the Mule Packing Team, said this is her second semester with the club.

“We have club rush every year and I try to bring stuff up whenever we have ASO meetings,” Kennedy said.

Kennedy said everyone is very supportive of one another when it comes to working together as a team.

“We work first individually on packing and then together as a team, so every team has four people,” Kennedy said. “We weed them out first by letting everyone have their trial runs and getting as efficient as they can individually, and then we group them together. You learn how you work and whose best at what.”

Kennedy said team members have to be very adaptable and self-aware of their surroundings.

“You definitely need to know how to communicate and how to work quickly and efficiently. It’s very helpful to have more horse experience just so that you know how to handle them,” Kennedy said.

The Mule Packing Team uses a dummy mule named Pookie for many practice demonstrations since they do not have any mules on campus to use.

“Rock Creek Pack Station lends us their mules and they are huge supporters,” Maccanelli said. “There are other pack stations that compete on a professional level and on an amateur level aside from the interscholastic. You get to learn from those people too.”

Emily Hensley, secretary of the Mule Packing Team, has been a member of the club since it was founded.

“I’ve been with horses pretty much my whole life. I grew up with a racetrack and I had my own horse,” Hensley said.

Hensley said being a member of the club has helped her learn much more than she expected.

“I’ve learned a lot about myself,” Hensley said. “I’ve improved a lot with my skills, and we time ourselves with our packing. I noticed I’m getting faster and faster and I’m getting close to doing it in under a minute. I keep record of all of our times so we can see where we can improve.”

Hensley said the club has helped her reach a high skill level in a short amount of time.

“I was able to pack mules, pony mules and do a bunch of stuff that I probably may have not known how to do if I didn’t have the club,” Hensley said.

Hensley said the club gave her an opportunity for a summer job relating to mule packing.

“I know for where I was this summer, we had these dams we were fixing,” Hensley said. “We were packing people up and down the mountains with their supplies for over two months. We packed up all their food. We packed a barbeque, we packed up propane, you name it we pack it.”

Hensley said she enjoys the experiences she gains from the club and the team always has fun with its practices.

Maccanelli said it’s vital to keep the agricultural heritage of Pierce because they are in jeopardy of losing it.

“It’s really important that our community knows about our school, knows about our program and not just the horse program, but all agricultural programs. We are still here, and we have students that are here, and they want to learn, so we need our teachers and we need this program to stay alive” Maccanelli said.

The club meetings are held on Thursdays from 1:30 to 2 p.m. at the Equestrian Center in the fundamentals area.

For more information listen to the KPCRadio