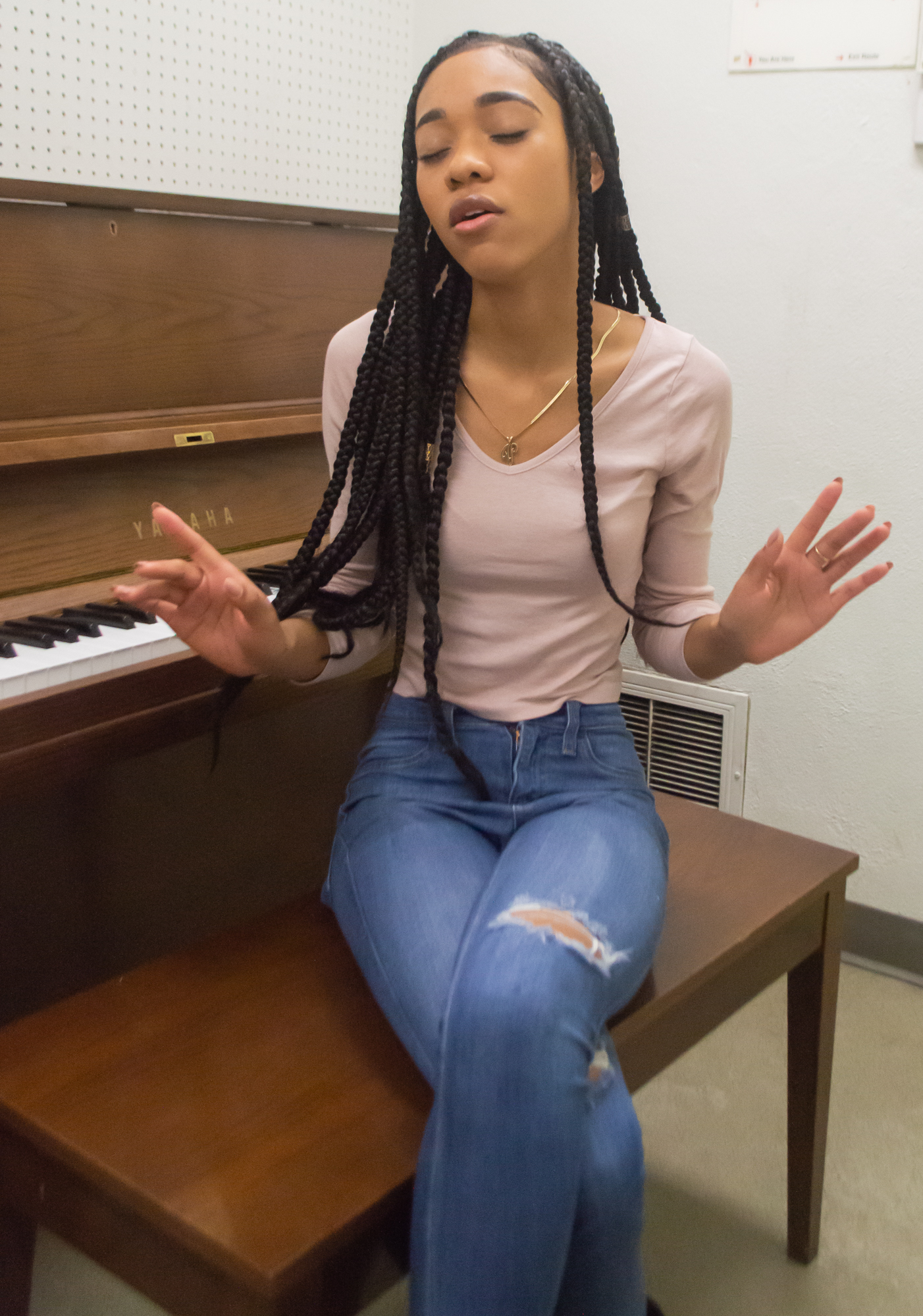 In third grade, Leah Raquel Drew painted herself flying over the Hollywood sign, a clear departure from what her fellow classmates’ were creating.

Drew’s grade school teacher assigned her class to paint something inspired by the book “Tar Beach,” by Faith Ringgold, which portrays an African American girl who flies above New York City rooftops. The assignment was to draw a picture of yourself flying over something.

“Most of the other kids were drawing like Toys “R” Us or the playground,” said Leah. “But mine was flying over the Hollywood sign.”

Being a musician, student and youtuber, Drew’s aspirations were always inspired by her far reaching vision, often leading her to choose a divergent path.

“I want to become a strong vocalist and a strong performer,” Leah said. “Because if I was put in a circle with actual professionals in the industry, I wanted to make sure when I release something that this is top notch quality work.”

Drew, 22, got into the music program at Pierce College in 2017. She realized it was time for her to pursue her dream of becoming a performer as she had been suppressing it since she was very young.

The music industry can be a tough giant to conquer, or at least that’s what everyone thinks, but she is committed to breaking every obstacle to become an influential artist.

When her parents divorced, and she had to move with her mom and her little sister from Philadelphia to California at 15-years-old.

These changes were tough for Leah as she came from having a home, stability and a big family to moving to LA and adopting an entirely different lifestyle.

“It was an investment,” Leah said. “I was able to come out here and meet so many different people and have better opportunities.”

However, Leah’s artistry knows no bounds when it comes to creativity, because before she decided she wanted to focus on music, she started as a beauty blogger on YouTube, which has over 219k views. Also, this knowledge came in handy in terms of promoting her music.

“At that point, I was able to create content that I like,” Leah said. “And even if you do hire someone else to do your content, you wanna be able to tell them how you want it.”

Before she can even remember, Leah’s family had connections to true R&B and Motown musicians.

“That’s how I developed my love for music,” Leah said. “My uncle works in the music industry, so it comes from my dad and my mom’s side of the family.”

YouTube was a big stepping stone for Leah and gave her a clear vision of how she wants to see herself as an artist.

“I wanted to get used to the idea of putting myself out there on the internet,” Leah said. “So I started making beauty videos.”

When Nathan first heard Leah sing, he was drawn to their shared passion for R&B and started collaborating in and outside of Pierce.

“She just stood out from the other people,” Gonzales said. “It’s really cool to hear that R&B feel. She has a very hardworking approach and she puts herself out there. She does whatever has to be done to make it work.”

By the end of January, Leah decided to release her new R&B song called “Love Jones.” A very soulful, mellow beat inspired by the 90s movie with the same title.

With a growing social media following, Leah has been able to connect with her audience through her new single, and that has inspired her to put more music out.

“This song is really touching people,” Leah said. “ I was very surprised on how people can connect to me. I enjoy making music for them.”

Leah has a solid vision of what she wants for her future, and she isn’t stopping anytime soon.

“I see myself supporting myself solely with my music,” Leah said. “I see myself performing for bigger crowds.”

Behind the shy appearance, Leah has big ambitions for her music career. Moreover, she knows how competitive the music industry can be for inspiring young artists like her.

Pierce College is an essential part of Leah’s career, which is where she has been able to learn and develop her vocal technique and her skills as a performer.

“Pierce College was the start of my journey,” Leah said.

Music Assistant Professor in Voice and Choral Music Garineh Avakian said she always inspires her students to go beyond their dreams and have the drive and discipline to achieve their goals.

“We want her to succeed, and hopefully she will become the next singer-songwriter,” Avakian said. “Her Pierce family is here behind her. We wish her the best.”

Leah will be performing at the Hollywood Banquet Hall on March 8, alongside 23 artists.