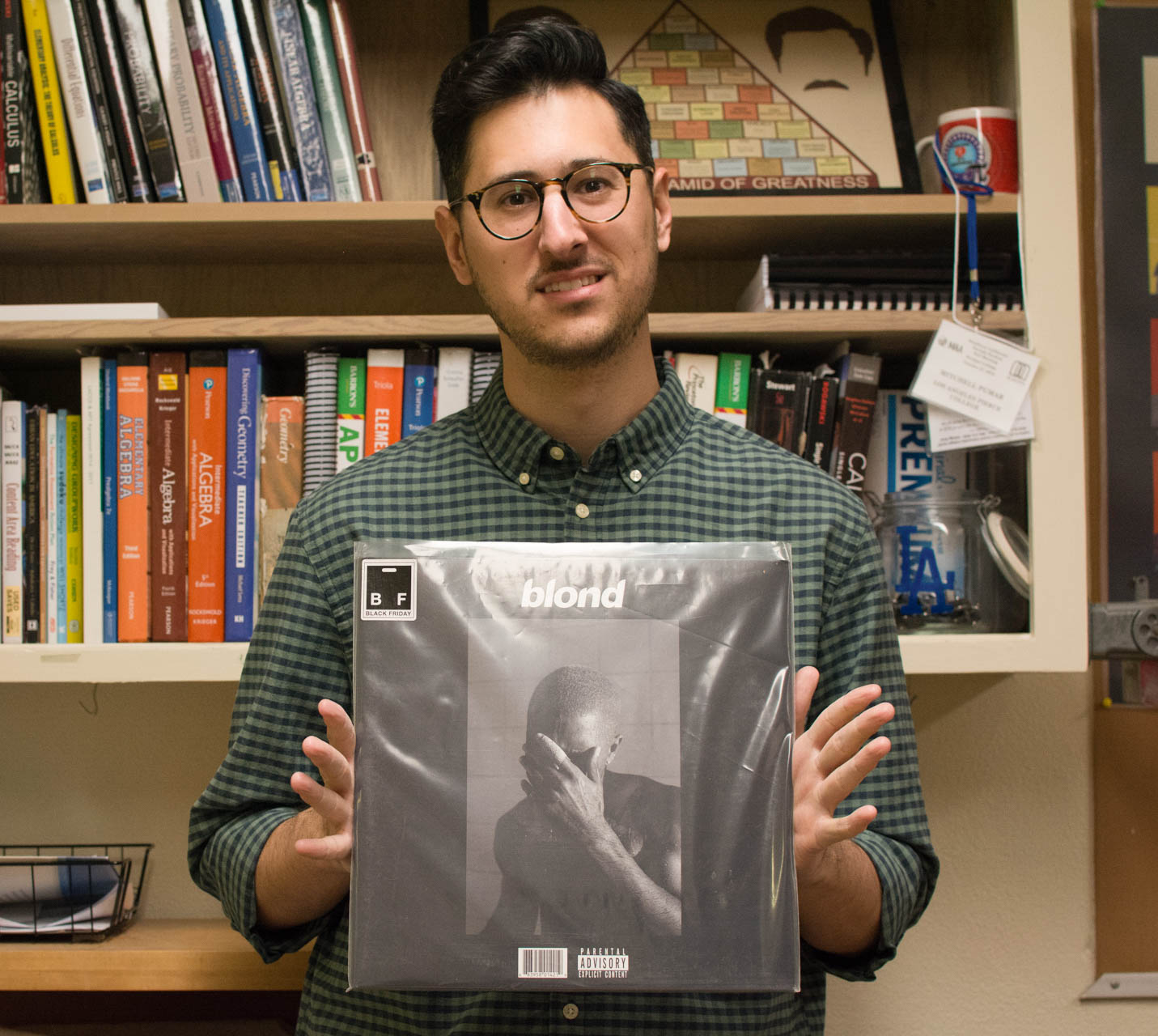 Becoming a math professor at a college doesn’t always start with a degree, sometimes it’s a journey that’s kicked off with an ironic disinterest in math, a passion for teaching, and a massive vinyl collection to help get through it all.

Mitchell Pumar, who has been a math instructor here at Pierce College since 2014, knows this story all too well. Despite mathematics not being his first field of study choice, let alone instructing higher levels of it, it has now made him who he is today.

“Math was my indifferent subject,” Pumar said. “It was a subject in school that I was always ok with, I was good at it, it never bothered me. My interests were in philosophy and politics, but my parents said we’re not paying for that, you need to get a technical degree.”

Aside from the push from his parents, what really set Pumar down this path was Obama’s first State of the Union Speech.

“It’s really cheesy, he had his First State of the Union Address and he was calling for the need for math and science teachers, and that lit a little bit of fuel under my fire”

Before finalizing on math, Pumar first studied business and economics at Pierce College and would then go on to do an internship at a financial planning place, but soon learned that it wasn’t what he wanted to do. He would go on to transfer to UCLA, but he realized that right after he graduated, he would then be taken off his parents’ health insurance.

“I got kicked out of my parents’ health coverage for having a deviated septum, so I needed to go back to school to get back on their insurance. I actually came back to Pierce, enrolled in fun classes like guitar and electronic music,” Pumar said.

It was then during his time spent back at Pierce College, when Pumar started formulating the exact thing that he wanted to do.

“I started tutoring at the tutoring center, that experience of tutoring that spring solidified, this is what I want to do so I went, and I took the required state exams applied for CSUN’s credentialing program and then I actually became a high school teacher for 5 years before I came over here.”

But prior to getting into the academic life, Pumar had been stockpiling on vinyl records since the age of 16.

“I had a friend in high school, whose parents gave him all of their old records, and I was at his house. As soon as I saw a record on the table, in motion, producing music, I got utterly fascinated and it’s been a total obsession ever since,” Pumar said.

Pumar has accumulated a massive collection of 1,214 Vinyl’s and said that choosing one favorite is hard. He said his collection is worth anywhere between 16,000 or 40,000 dollars. His most prized pieces of his collection are the ones where he got to meet the artist and have them sign his vinyl.

“All the signed ones I have are priceless, because there is that interaction there where I got to meet the artist.” Pumar said.

Pumar uses a website called discogs.com, which he uses to help him catalog all of his vinyls’. He has a huge display of them in his home, where he has them in order by the artist’s last names.

Mathematics Chair Edouard Tchertchian believes that aside from Pumar having an amazing collection. He has impacted the department in a positive way.

“He is very excited about his job, I think that he loves education,” Tchertchian said. “I think to him this is not a job it’s a career, I think he enjoys working with students and I think students enjoy working with him, his offices hours are very popular.”

Sam Pearsall, a fellow math instructor at Pierce College, believes that Pumar has greatly impacted the the math department, and really shows how passionate he is about being an instructor.

“He has done alot to help us out and he is in the AB 705 committee, which is a committee to rewrite the math curriculum here” said Pearsall. “He is a great instructor and I think that enthusiasm permeates throughout the department.”

Pumar said that although his collection is sentimental, he finds himself occasionally pondering the idea of selling it.

For a person who wasn’t interested in math as a student, only to become a math professor through a series of events he’d never expected to go down, Pumar now wishes to see his students succeed, and along the way spread the same fondness for music and vinyls with them.