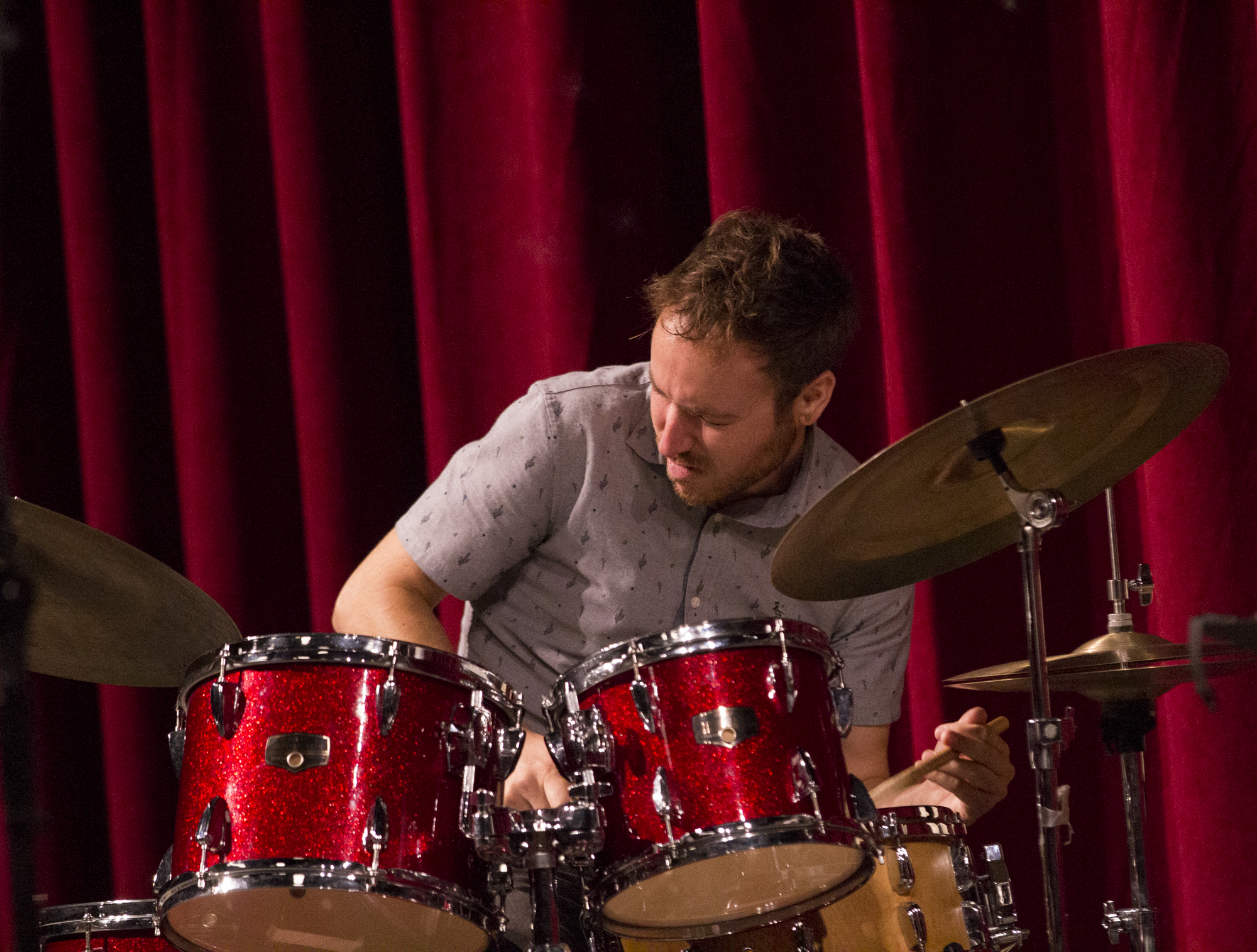 Hunched next to a 120-year-old double bass that towered over him, the musician closed his eyes and swayed to the music as his fingers slapped the strings and jazz filled the crowded room.

Next to him, a man sitting at a bright red drum set subtly switched his sticks to accommodate the shift in tone and volume. All the while, a long-bearded guitarist improvised, his fingers barely visible as they jumped from one string to another.

Leckie composed the majority of the music.

“My rule for composition is that it’s one page long, easy to read and fun to play,” Leckie said.

The line-up included songs from Leckie’s debut album “The Abode,” which focused on his connection to New York and its feeling of home.

The first song, “The Abode,” introduced the trio. Each instrument was showcased in small, improvised solos throughout the song.

The next song, “Métis,” began with just the bass. Leckie plucked and slapped for almost a minute before Baltazor played his first note. Gradually, the drums and guitar grew louder and the sounds of each instrument rang throughout the theater.

In their song “A Beautiful Wind,” the trio improvised simultaneously. Each musician, with closed eyes, created something unique and different from their counterparts. The three instruments complimented one another and battled in a thundering symphony of jazz.

Only one of the songs wasn’t written by Leckie or the trio. “Yematibela Wef,” composed by Assefa Abate, is an Etheopian song that translates to “a bird that’s not to be eaten,” according to Peled, signifying a free-spirit.

In total, they played seven songs, each lasting a few minutes. Each song started and ended with a theme, while the middle was filled with improvisation.

“That’s how you make one page of music last for seven minutes,” Leckie said.

The trio performed for an hour, answering questions at the end from audience members, and even sticking around to talk to interested students about the instruments and their careers.

Prior to moving to Los Angeles, each of the three had lived in New York, though their paths hadn’t crossed. It wasn’t until they landed the same gigs in Los Angeles that they met and began playing together.

Individually, they’ve studied and played professionally with various styles of music, including rock, jazz, and classical. They’ve each performed in various cities, and even internationally. As a trio, they play around LA and decided to play at Pierce because Leckie is also an adjunct music teacher at the college.

This semester, the Thursday Concerts all feature professors from Pierce. For those interested in future performances, the free concerts run from 1 p.m. – 2 p.m. at the Performing Arts Building Mainstage.

The next performance will be on Sept. 19 and will star Kevin Good, a percussionist.