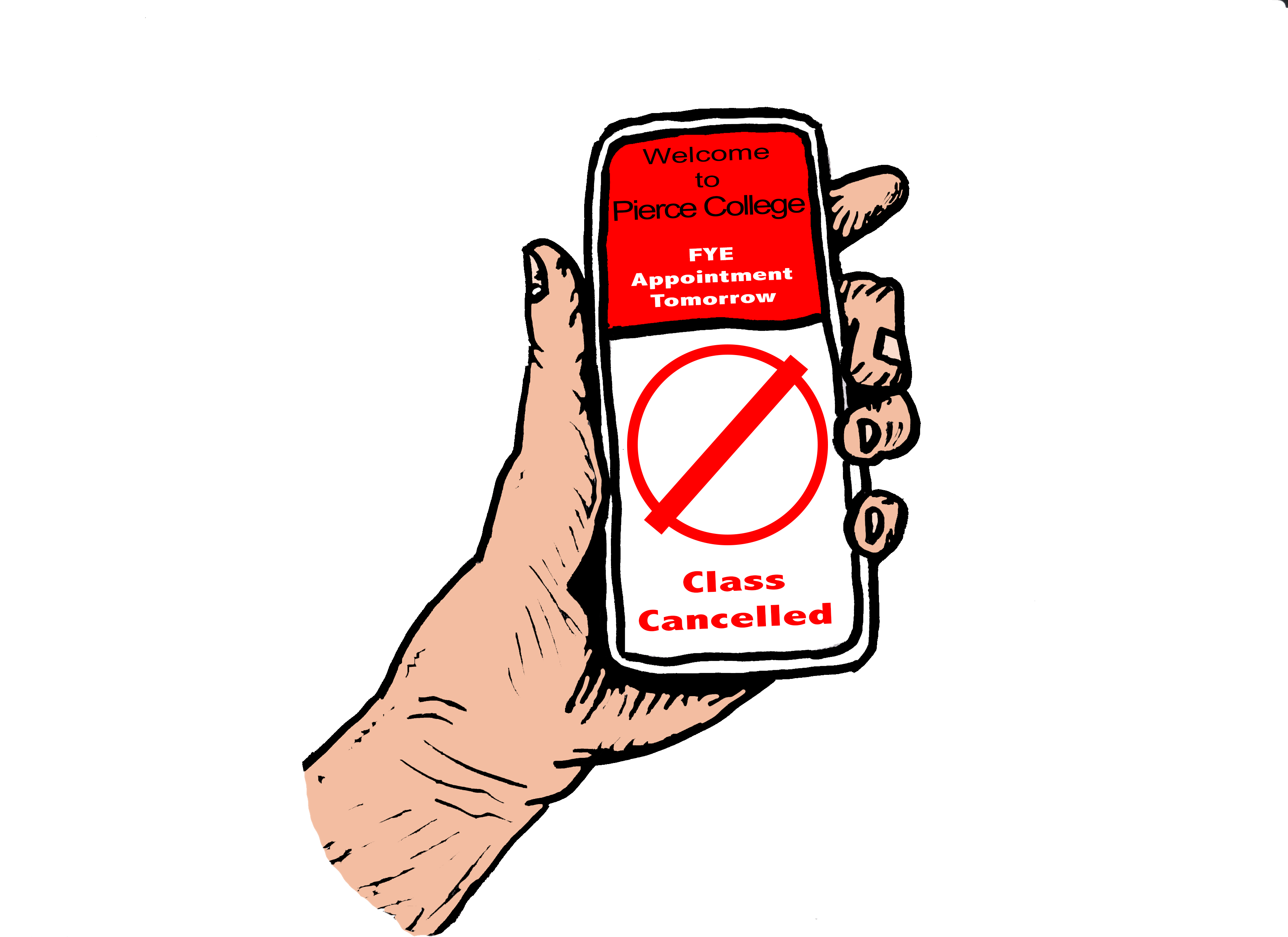 While the first few weeks of school might be a bit of a mess for both students and faculty, more effort by either Pierce or the LACCD should be put into notifying students that there has been a change in their schedule, especially when it’s a week before school starts.

Students receive little in the way of notification if a class has been dropped by the school, or if a professor has been replaced with another person at the last minute. There’s also not much of a safety net if this happens either, because if a student’s class is dropped, the only thing they receive is a refund.

While this may be a problem in the first few weeks of school, this lack of notification could still could cause a lot of unneeded confusion among students in what is arguably already the most confusing period of the semester.

In the 2017-2018 LACCD Annual Report, the estimated annual average of enrolled students in the Los Angeles Area was between 200,000-240,000. Pierce College estimates on its website that has a population of 20,000 making up roughly around 10 percent of the LACCD’s population. With a population of this stature, a few surprise drops could send hundreds of students on a tailspin.

One simple way of addressing this would be to send a notification through canvas (an app that most students have and use) to alert them that a class has been or will be dropped in the near future. This solution generally would have the largest outreach to most students on campus.

Another possible way of notifying students would be to have them give their student email address to the professor after they purchased the class. If something happens then an automated would be sent out to those students. This would require students to check their student email far more frequently, but this still would at least still be a way of notifying students of the discourse.

Using the Pierce website to list recently cancelled classes on the front page would also be a good and easily doable solution. Just about everyone on campus uses the website, so the information would be seen by a much larger audience.

One method that could possibly work would be to leave an automated voice message for students whose classes have been dropped. This would require students leaving their phone numbers when registering a class.

Aside from dropping classes, teachers may have to leave due to personal reasons but have a backup teacher take over before the class is officially dropped for good. While not as big of a problem as the former, this could still leave many students confused on their first day without prior notification. A simple email or the professor’s name being changed on Canvas might alleviate some of this to a degree.

It’d be for the best that the LACCD proposed new notification rules to all it’s schools that fit under its umbrella. Some students from Pierce may also be taking classes (online or in person) at other community college campuses, and these surprise cancelations might affect them, as entire commutes would need to be changed.

If Pierce could get behind such changes, much of the stress caused in the first few weeks of school could be alleviated for both staff and students alike.

Students who are fresh out of high school are often confused during the start of their path toward higher education. Community college can be overwhelming and deciding on the right major could already leave new students feeling stuck.

The transition from high school to a two-year institution will bring a new environment and more challenging curriculum, and first generation college students are prone to more academic challenges.

Pierce College has a First-Year Experience Center on the first floor under the Library Learning/Crossroads building. The center offers counseling after first attending a mandatory New Student Counseling Group. The purpose of the group is to prepare new students for taking community college classes and learning the academic policies of LACCD and Pierce.

Finding a way to fit in the community can be another emotional barrier, so a way to familiarize with the new campus is a vital part to extracurricular growth. There are FYE programs within the California Community College system available as a valuable resource for students to participate in.

According to the Pierce College website, “The mission of the First-Year Experience Counseling Center is to serve the educational planning, matriculation, and adjustment needs of Pierce College students who are new or have completed under 24 units from any US regionally accredited institution.”

Counseling is an important part to staying on a solid academic path, and FYE is one way to help students keep up with appointments and meet with other students for academic support. FYE is not limited to counseling, as the program includes others tools for students to make their higher education journey smoother.

Certain institutions are making FYE a requirement to receive benefits, such as the California Promise grant.

All College Promise students must be a part of the FYE Program at Los Angeles City College, according to their website.

Other colleges offer the California Promise grant to community college students who meet the requirements. Making FYE a mandatory program at Pierce for at least the first year can significantly improve students’ awareness of academic policy.

The FYE program aims to help students who want to improve their academic growth through a clear path.

According to results of a national survey from Ithaka S+R, “Institutions with an FYE program are more likely to offer programming that is targeted specifically to subgroups of underserved students, including low-income, low-performing, and high-achieving students.”

It could even be possible to hold more FYE workshops or New Student Counseling Groups on Fridays; a day when not many classes are in session. It could make a difference for students who have no idea how to pursue their academic goals and could give insight about transferring to a four-year institution.