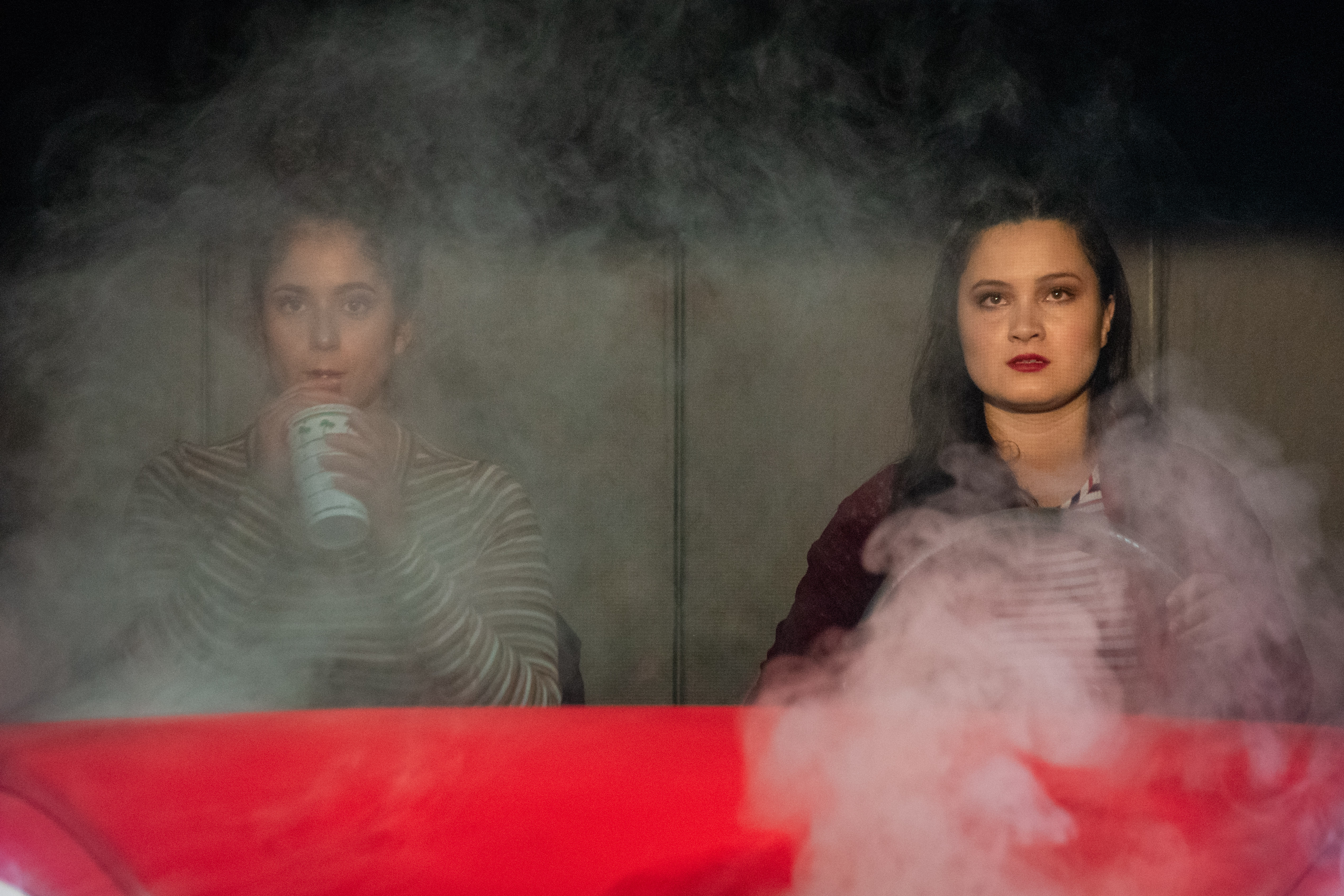 While stalker-killers and fatal car accidents may not seem like humorous subject matter, Lauren Yee manages to blend these perverse topics with whimsy and wit in her play “Hookman.”

Yee calls her work an “existential slasher comedy,” and Pierce College’s production of “Hookman,” directed by Shaheen Vaaz, lived up to those expectations with its steady humor, impressive set and skillful acting.

In the center, a seemingly real car moved toward the audience, and to its right, a dorm room with two beds and music posters covering the walls showed the different personalities of the roommates. Having a modern set for the horror genre showed that our fears often come in ordinary situations, such as driving with a friend or just being in school.

The play opened with college freshman Lexi (Alexa Maris) and Jess (Loida Navas) sitting in the car, eating In-N-Out and talking about their new lives away from home. Their comical conversation perfectly introduced the play.

After Lexi’s mother called and reminded the girls to stay safe, Lexi began to rant about her overprotectiveness and made fun of her mother’s warning about the serial killer Hookman.  Then, as the two tried to figure out directions, their lives took a turn for the worst. Lexi would go on to relive it multiple times throughout the play, each time revealing more and more of their conversation in the car.

Lexi returned to school at UConn and faced the awkward day-to-day interaction with her roommate, Yoonjin (JJ Javier). These wildly different characters seemed to share nothing in common other than their living space, and their miscommunication is both ridiculous and relatable.

Their uncomfortable conversation ended when Yoonjin left the room and Lexi fell asleep on her bed, clutching a knife. As the lights faded, commotion on the opposite side of the stage cleverly concealed the transition in the bedroom and avoided clunky set changes and character swaps.

Creative seating design allowed actors to break the fourth wall by walking through and interacting with audience members in some hilariously uncomfortable situations.

As the story moved on, our protagonist Lexi became increasingly paranoid about the Hookman and believed he was trying to harm Yoonjin. In moments of panic, the lighting and sound effects put the audience in Lexi’s mind, scaring them and making her anxieties and inner fears feel real to those watching.

While the majority of the play consists of comedic lines and laughter, there were a few powerful, solemn moments. The storyline included important and relevant commentary regarding rape and sexual assault on college campuses, and nobly navigated the delicate topic.

There were also intense moments that were not so somber, but rather chilling. In between the amusing banter with Lexi and other characters, as she worried about Yoonjin and Jess, they would look towards the audience and say the same line deadpan, then go back to their comical conversation.

The set had notable elements including a live, video chat scene between Lexi and Sean (Jon Michael VillaGomez), a guy she met before Thanksgiving. A screen behind the actors showed a real-time display of their video call. The impressive stunt was even funnier when Sean “glitched” along with his computer.

The adrenaline-filled play is perfect for Halloween season. The generic, college setting is relatable to students, and the excellent comedy makes for a fun night. With all its twists and turns, make sure to watch closely.