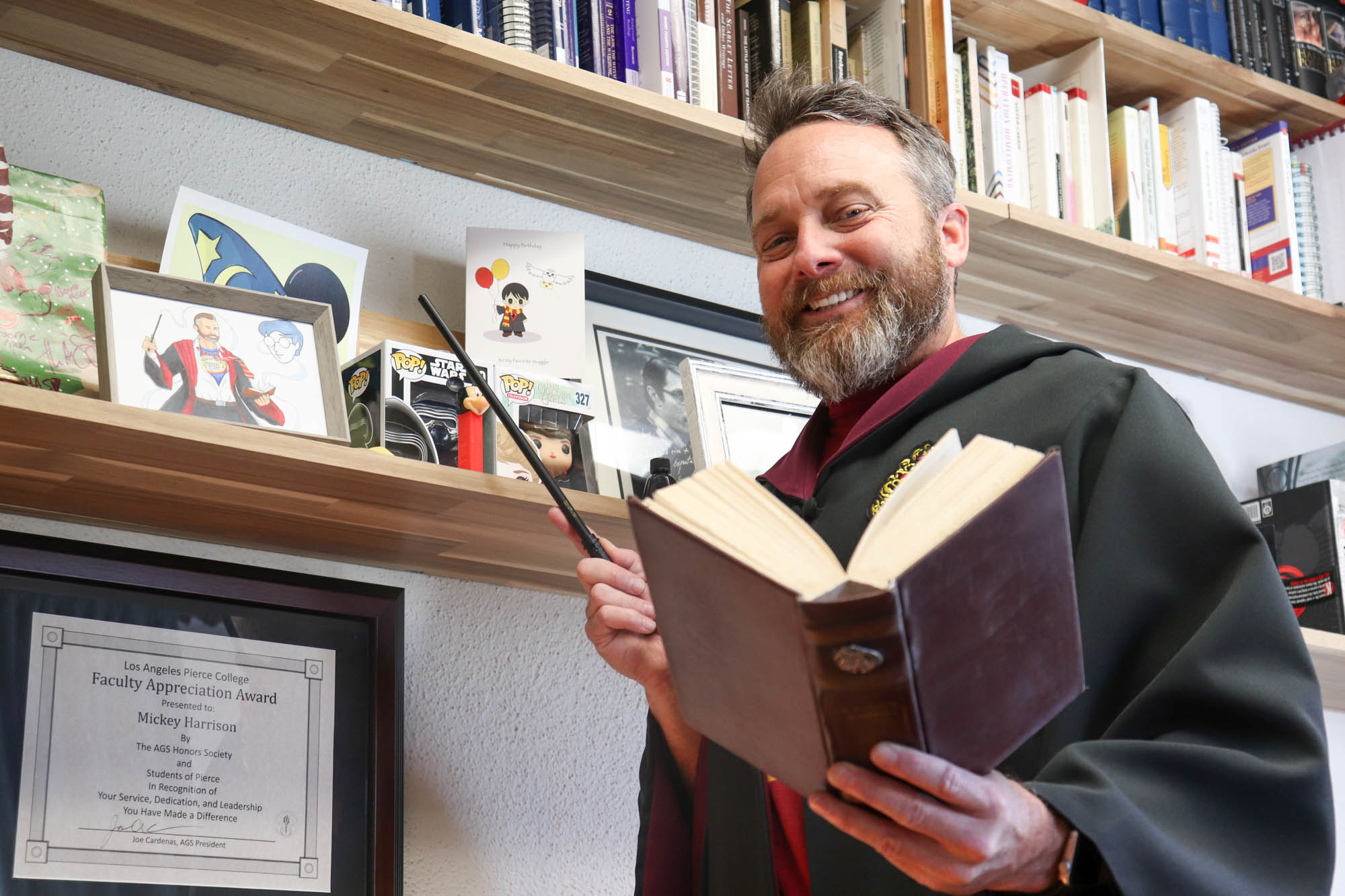 The wrinkled brown Sorting Hat sits at the top of a student’s head.

“Gryffindor!” shouts the professor, assigning the student into their house. With a wave of his wand, he sparks his students’ imaginations and opens their minds to the world of “Harry Potter.”

This is not Hogwarts. It’s just another day in English professor Mickey Harrison’s class.

Harrison teaches The Literature of Harry Potter on campus. He said that he thinks “Harry Potter” is equal in educational value to the works of Mark Twain because of the series’ universal appeal.

“The power of Mark Twain’s writing can embrace the imagination and the creativity of an 8-year-old as much as an 80-year-old,” Harrison said. “That’s how much depth there is. I think the ‘Harry Potter’ series from Rowling does the same.”

Harrison created the class to interest students with books from their childhood.

“I realized I don’t want to teach what my peers think I should teach,” Harrison said. “I think education should be fun. So why stop teaching from the things that [professors] think are important? Let’s teach what the students like.”

To bring the “Harry Potter” series to life, Harrison dresses up in Hogwarts-themed clothing and handwrites official Hogwarts acceptance letters for students. He also categorizes and places students into their “Harry Potter” houses using a replica of the sorting hat depicted in the books.

“I didn’t want to just teach a literature class about a subject,” Harrison said. “I wanted it to be a fully immersed experience.”

Harrison said students feel like they are a part of the Wizarding World when they join his class.

“They’re telling me about the same sort of excitement that we see Harry experience, where they kind of feel like a witch or a wizard,” Harrison said. “They really feel like they’re part of that.”

While the young adult series isn’t the usual course material for literature classes, it contains important themes that can be fully analyzed, according to Harrison.

After high school, Harrison spent 12 years pursuing a career as a rockstar and skateboarder.

During this time, he attended El Camino College for a brief period before being put on academic probation.

“I was such a good student that they asked me not to come back for a couple of semesters,” Harrison said.

At 30, Harrison said he decided to go back to school because he wanted more out of his life.

He said he was inspired by his children’s literature professor who told him he was meant to teach English.

“That was the first time that anybody saw something in me academically,” Harrison said. “And I was like, that’s what I’m going to be. I’m going to be an English professor.”

Harrison eventually got the opportunity to teach a children’s literature class at Pierce College.

In his first year he taught “Grimms’ Fairy Tales” and “Cinderella,” along with other classic texts. He said he wasn’t passionate about these books and instead wanted to dedicate an entire course to “Harry Potter.”

While some professors argued that “Harry Potter” wasn’t worthy of academic discussion and analysis, Harrison disagreed.

“I think that in any good writing you can find deep, important social, political and religious issues that students can relate to,” Harrison said. “We don’t have to just read Chaucer and Shakespeare to get these important messages.”

Harrison said students are engaged in the text in The Literature of Harry Potter class.

“Students have a deeper connection when it’s something that they want to read,” Harrison said. “And when students want to read it, my job is easy.”

Harrison said the former chair of the English department, Donna Accardo, encouraged him to pursue teaching the “Harry Potter” class.

“She said, ‘I love that you are going to try something new. Go for it,’” Harrison said. “She was fully supportive, 100%, so I give her the credit of letting me try to do this thing.”

Asia Ozor, one of Harrison’s students, said she is taking the class because she loves “Harry Potter.” Ozor said she commutes an hour to take the class.

“I think analyzing it from a literary perspective is something that most people would kind of turn their nose up at because it’s children’s lit,” Ozor said. “‘Harry Potter’ is a series that really lends itself to literary analysis. Seeing it at a collegiate level is something I never thought I would see having grown up with the books.”

“He’s very passionate and he makes it a very fun, enjoyable class to be in,” Vick said.

“We can really understand what’s happening in ‘Harry Potter’ and then we can relate it to these world life experiences and make connections to help better understand the world that we’re navigating,” Harrison said.