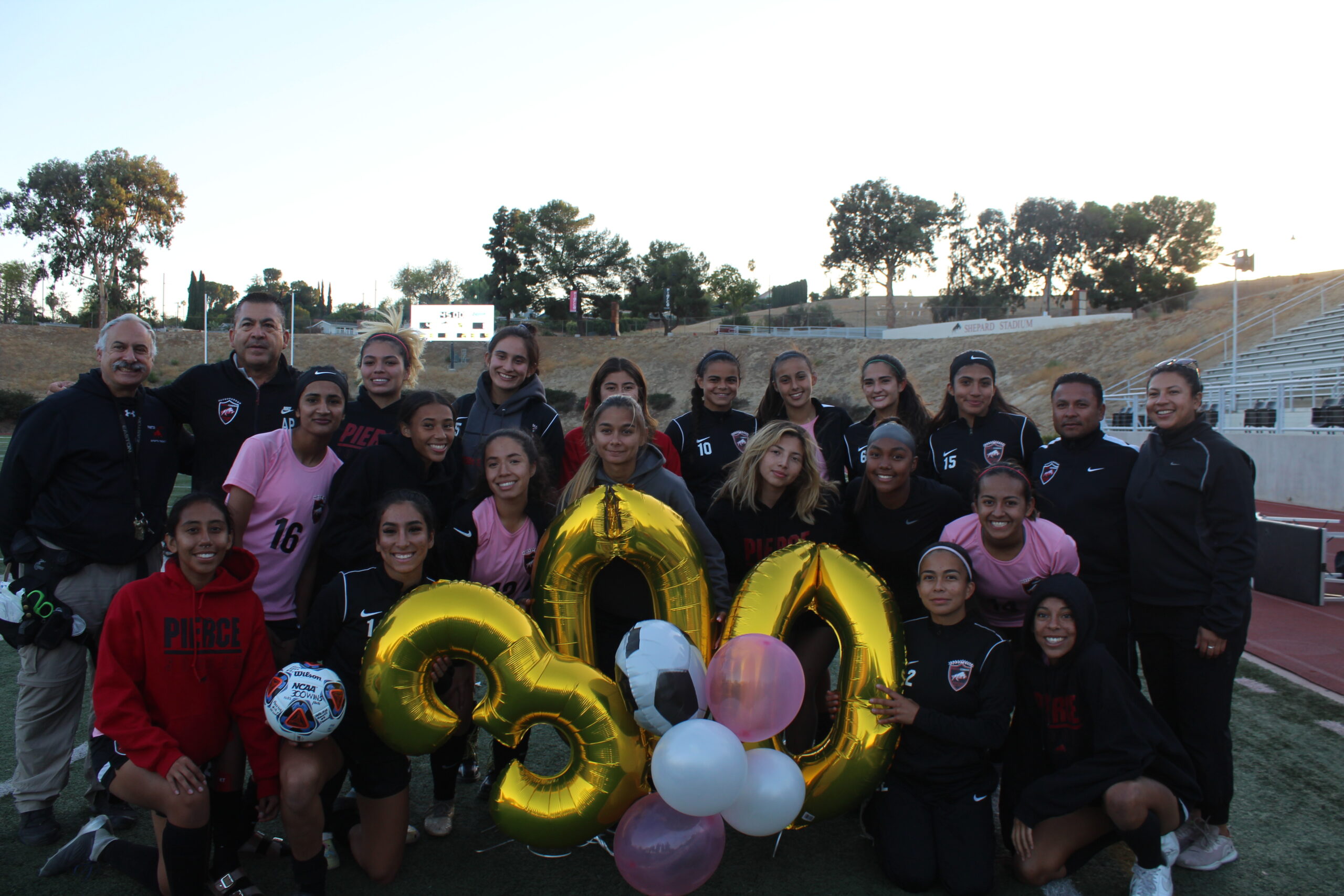 The women’s soccer team reached a milestone Tuesday as they beat Cuesta College 4-1 to earn their 300th win in program history.

Only  few programs have reached this accolade and the Brahmas are the latest team to obtain this achievement.

Longtime head soccer coach Adolfo Perez said it is a blessing to have reached 300 wins.

“It is pretty incredible, especially when winning a game is difficult,” Perez said. “To win 300 is a blessing. This has only been done 10 times, which is insane, especially in college when it is up and down.”

The Brahmas started well and it paid off as midfielder Alexandra Meza gave Pierce the lead.

Cuesta immediately responded through Jordan Bullard, who plays on defense, but she was at the right moment to poke the ball past Pierce goalkeeper Anabelle Rosas.

Forward Kiara Washington started as a sub, but made an instant impact when she came on. She had two great opportunities to increase Pierce’s lead, but her attempts went wide.

Third time was a charm for Washington as she gave the Brahmas a 3-1 lead heading into the half.

Perez was pleased with how the team started the game.

“Their offense was good and we took advantage of our speed and we are using a different tactic. We are not starting Kiara,” Perez said. “We want to wear the other team down and then put “Kiki” on and so far it has two games like and it has worked.”

In the second half, the Brahma defense was firm as they didn’t give Cuesta too many opportunities in the attacking third.

The offense was creating more chances through Meza, midfielder Halle Manalili and Washington.

Pierce hit the post twice as they were aiming to wrap things up.

Washington made sure the Brahmas had a comfortable lead as she scored the final goal off a deflection from a Cuesta defender.

Washington said she is proud to be a part of this accomplishment.

“I’m very proud of Adolfo and of the team. We have been working hard and we deserved it. It feels great to be on the team that reached the 300th win and even better that it was at home,” Washington said.

She was pleased with scoring two of the four  goals in this game.

“It is great to contribute, and be on top of our conference,” Washington said. “We are going to keep working hard and staying focused.”

Perez said the team is now focused on Ventura. The Pirates left the Brahmas with no playoffs in 2019.

“They are one of the best teams in the country. They are ranked number three in the country, but we are playing well,” Perez said.

Athletic Director Susan Armenta said she is excited to have witnessed history.

“I didn’t think I would see this day in my tenure. We have been on a roll and I didn’t expect any less,” Armenta said. It’s reflective of what Adolfo instills in the program and in our student-athletes. He does a great job in doing whatever it takes to have a successful program.”

Armenta said she hopes the team keeps doing well and appreciates what they do on the field.

Perez gave a special dedication after getting the win.

“I dedicate this to my mother,” Perez said. “She passed away in February. I wish she was here to see it, but I know she saw it from up there.”

The Brahmas have one week to prepare for their road game against the Pirates. They play on Tuesday, Oct. 19, at 6:30 p.m.