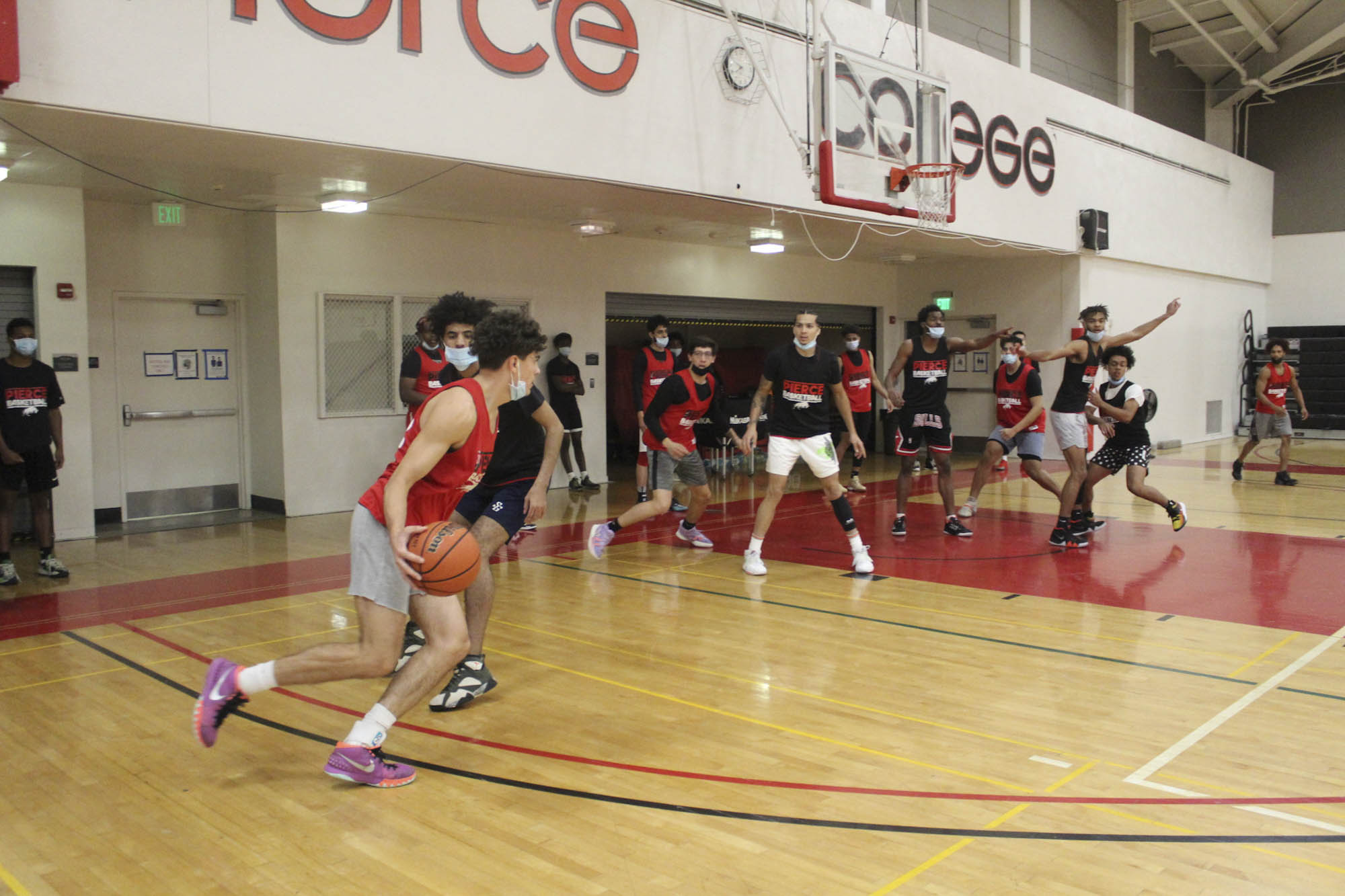 As the team files out of the gym there is a palpable energy emanating from the players.

Each one smiling and laughing as they leave another practice, almost as if they know what lies ahead of them.

The men’s basketball program is looking to re-emerge from the pandemic with a strong season.  After going 13-15 in the 2018-19 season, and 15-13 in 2019-20, the team is looking to change things around by making a strong push this season.

“As a team, we’re getting better and better every day, so I’m excited for this season,” captain EJ Bushner said.

Returning sophomore Zion White said they must give their all during the training sessions.

Despite the optimism from the returners, head coach Charles White appears grounded in the grind ahead.

“We still got work to do, you know, to keep guys healthy. And then we’re looking forward to having a winning season,” Charles White said.

The roster is massively reworked with the coach losing two big men to personal reasons. And due to the pandemic,  a large group of incoming freshmen. The season is looking like a big change in the program as a whole.

Incoming freshman Gabe Abbott said he is excited to see what a college atmosphere will be like, especially now that fans are back into the venue.

“I’m most excited to play home games at Pierce. I know the fans are gonna come out,” Abbott said. “Hopefully we will have some exciting games, and that is going to help us a lot when fans come out, they give us some energy, it hypes us up and  gets us going.”

Even though the team has optimism looking forward, they are still aware of the pandemic around them and how it is still a concern.

The changes don’t stop there. There are also mask rules enforced where players are required to wear their masks when on the bench.

Abott said it is better to be safe and follow the guidelines so that games don’t get canceled due to the virus.

“It feels good to finally be back and we don’t want things getting shut down. So yeah, you know, just hopefully just staying safe wearing our masks even if it’s annoying, we still got to do it just so we don’t get COVID,” Abbott said.

This exposure was a massive concern over the course of the pandemic, with coaches having to conduct workouts remotely to keep their players progressing despite the obstacles.

“Three days a week they was on Zoom doing physical workout, you know, weightlifting, that ain’t even weightlifting because you couldn’t be in the gym. So they have water bottles, shoes and backpacks,” Charles White said.

In addition to the unique weightlifting drills the team also had to conduct mobile shooting  and dribbling drills, usually filming from their phone.

Charles White believes that those drills have paid off, as the team has scheduled 12 top 25 teams to play against during their 24 game schedule.

“We had a winning season before the pandemic, trying to expand that and win the conference and get into the playoffs,” White said.

The players have got behind this montra, with multiple players having grievances over preseason assumptions.

“There’s a lot of momentum for us because people think that we’re not good. They didn’t even put us on the top 25 [Junior College] list and that kind of gives a lot of motivation to go out there and make a name for ourselves,” Abbott said.

Zion White added, “We honestly have a lot of potential and we will for sure make some noise this year.”

The epitome of these grievances came from Bushner.

“We’re just excited to prove to everybody that we can compete with any team out there. And I think we’re going to shock a lot of people,” Bushner said

The season starts Nov. 4 against West Los Angeles College at 2 p.m. in the Santa Monica Showcase.

The first home game will be Nov. 9 against Glendale College. Tip-off is at 6 p.m.