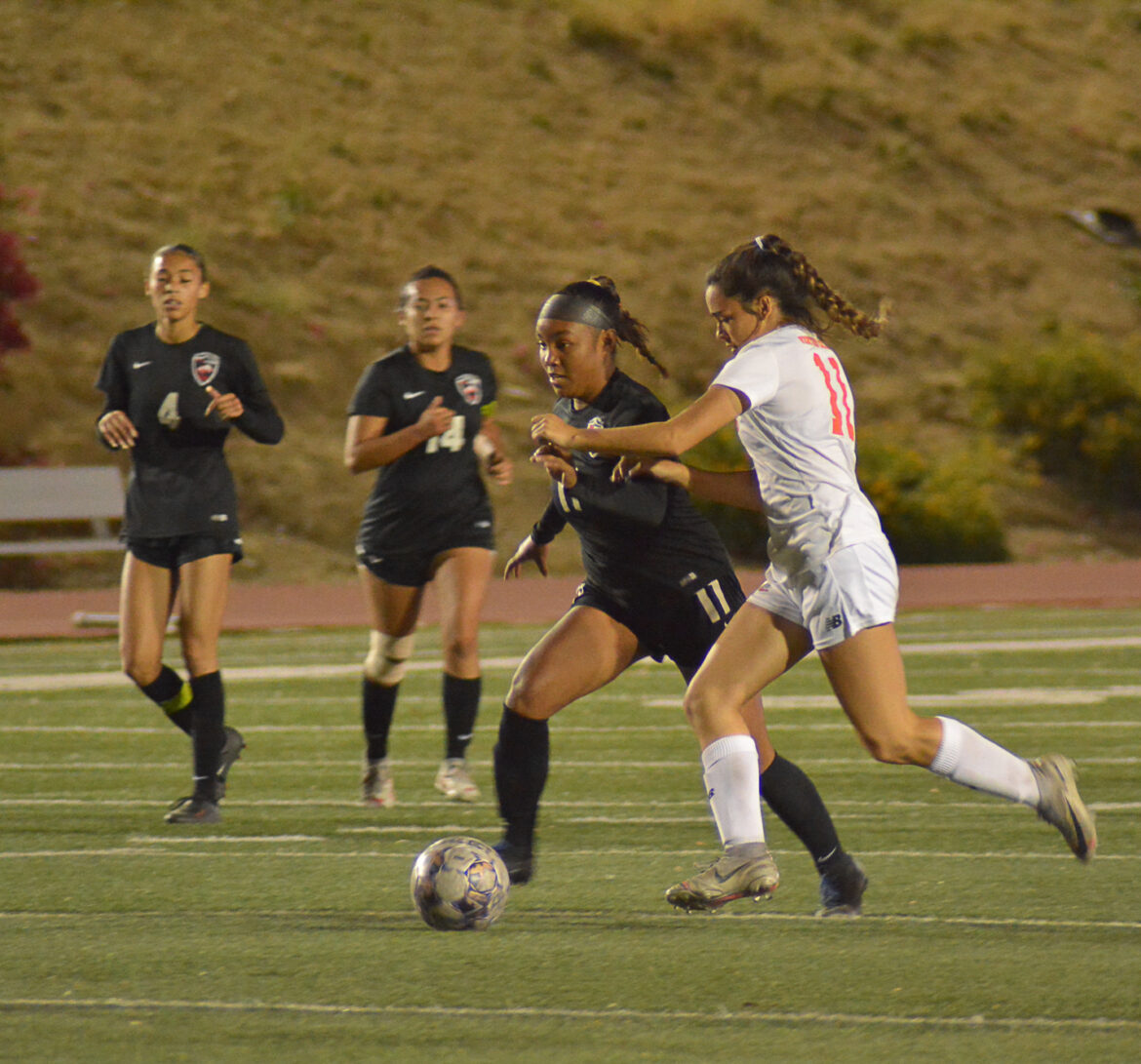 With goals from midfielder Arianna Vigil and forward Kiara Washington, the Brahmas won 2-1 against the Ventura College Pirates.

Head soccer coach Adolfo Perez said the team had worked hard all year for this win.

“We stopped playing for a year and a half, so I am tremendously proud of what this team has done,” Perez said. “We trained at 7 a.m. on Veterans Day. When everybody was sleeping, we were training and we knew what was at stake.”

The teams went without any goals in the first half of the game. As the second half rolled in, both teams played more aggressively.

Ventura took the lead through midfielder Alix Tirado. Moments later, Vigil got the equalizer for the Brahmas via a free kick.

Midfielder Brenda Alas said the second half of the game showed the team’s progression and motivation for the win.

“The second half is always going to be a lot harder than the first because it’s about which team wants it more,” Alas said. “It’s just a matter of matching their energy, which we did pretty well at the end when it got more intense.”

Alas said the best way to stay motivated after the opposing team becomes more aggressive is to continue pushing.

“We’re a pretty small team, so we just have to get faster so we don’t get pushed off as easily,” Alas said. “Even if we do, it kind of goes in our favor so it’s a win-win.”

Three yellow cards were given throughout the entire game and many players were roughed up. One of the cards was given when forward player Kiara Washington ran the offense and got knocked to the floor, resulting in a shoulder injury.

After the yellow card was given, the referee gave Washington a penalty kick and she scored the Brahmas’ second goal.

Washington said that she was proud of how far the team had come.

“It felt amazing scoring the winning goal, but also when my teammate Ari scored that free-kick. I think it was really phenomenal,” Washington said. “I’m definitely happy for her because we’ve been talking about free kicks a lot during practice.”

Washington said the second half proved how hard the team worked within the season.

Perez said that Ventura College had been the conference champions in the previous years and are Pierce’s hardest opponent.

Pierce had lost the last game against Ventura at home with a score of 0-1, and Ventura had won a game against Cuesta College 8-1 last Tuesday. Perez said this score had intimidated the team and showed that the Pirates had been destroying teams during the season.

“We had a game plan and then worked it to perfection to put a lot of pressure on them,” Perez said. “I thought we were going to get tired in the second half and we didn’t, so this is unbelievable.”

Perez said he is happy about the team’s efforts and accomplishment of the victory.

“I’m so proud that we were able to also win in front of the crowd,” Perez said. “It was awesome and it’s such a united team. It’s just special.”

After missing out on playoffs two years ago, the Brahmas make their return.

Brahmas face the Pirates again on Nov. 20 in the first round of playoffs. Kickoff is at 7 p.m.