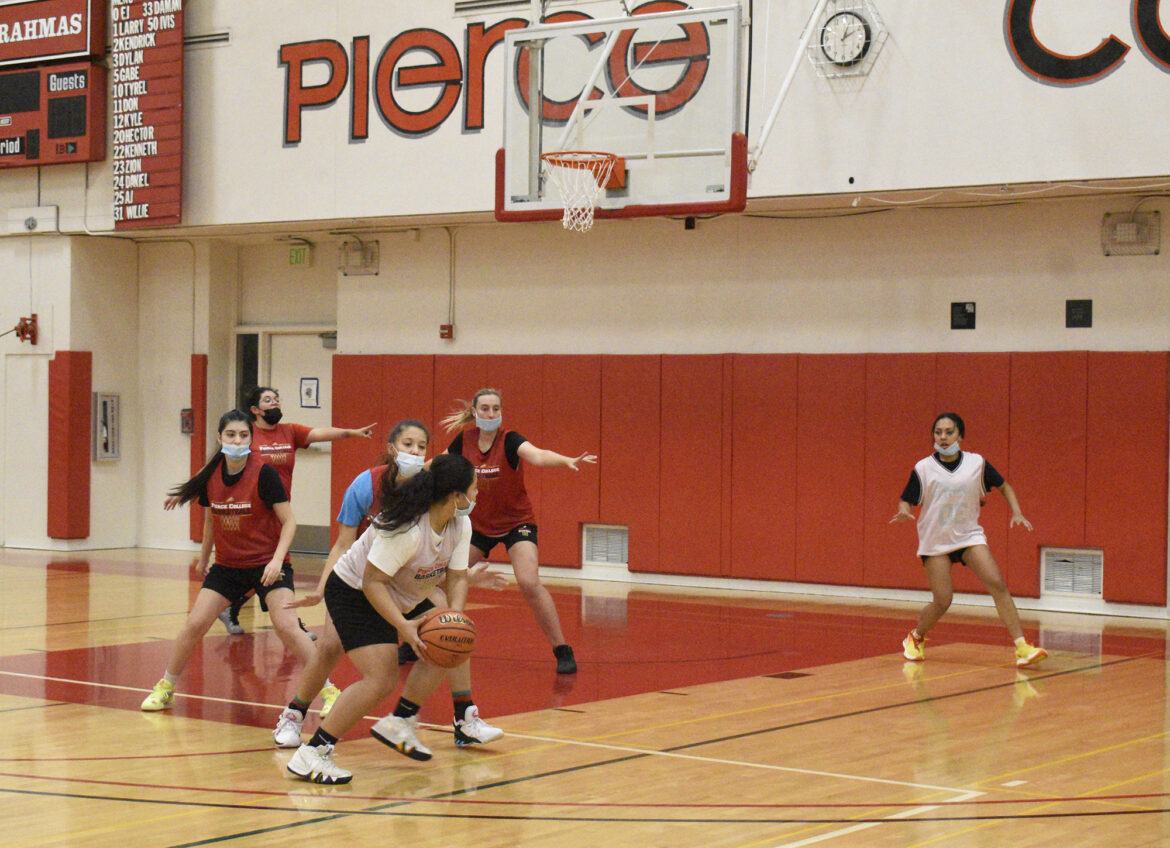 An hour before their practice even starts, the women’s basketball team is already working together filling the gym with high spirits.

With their season coming up, the excitement in the air is apparent.

Women’s basketball returns to Ken Stanley Court after not having a program for the last three years.

Guard Izzy Ferguson feels that this is a chance for her and her teammates to put themselves on the map.

“I personally feel like this is an opportunity for us to really get ourselves out there,” Ferguson said. “This is my first year here so I’m trying to make a statement while I’m here.”

The roster this year is composed of players that are freshman.

Associate head coach Les Thompson said while the lack of experience is apparent, the team is taking steps in the right direction.

“We’ve played two games, I think they’re starting to see what college ball is all about,” Thompson said. “It might take three or four more games before they get a pretty good understanding of what is needed at this level.”

Interim head coach Charles White said that it was crucial to have a women’s basketball program this year.

“It was important because we didn’t have a season for three years. Two years active and one year to COVID,” White said. “So we’re excited to have our first home game this Saturday, hopefully everyone gets to come out and watch us play and we’re back.”

The team is young and there’s bound to be many ups and downs throughout the course of this season.

However, Thompson’s expectations for this squad is just that they keep grinding and learn to compete by outworking their opponents.

“I would say the biggest expectation is just hard work,” Thompson said. “We won’t be the most talented or the most skilled but if we can go out there and beat them with our determination and will, that’d be satisfying.”

As for White, he just hopes for players to stay safe and return for next season.

“I just want them to stay healthy, you know, make it through the season,” White said. “They’re all freshmen so they’re going to get their bumps and bruises. And hopefully they all decide to come back and play next year.”

The team this year feels very slept on as they’ve heard people not even believe that there was a women’s basketball program at Pierce.

Thompson said that other coaches he talked to didn’t even believe Pierce had a women’s team.

“The backlash was ‘oh, they have a team?’ I heard that from coaches, from other programs, from other girls,” Thompson said. “The hardest part was letting people know that we are back in business with women’s basketball here at Pierce College.”

The roster has come a long way from the summer when they initially only had two players committed to playing basketball at Pierce College.

However, the roster now has 14 players which is thanks to the recruiting job by the coaching staff.

Ferguson said that working with her new teammates has been enjoyable.

“It’s been fun actually, I really like it compared to high school,” Ferguson said. “It’s just a different environment. It’s really cool, I like the way the team’s coming together.”

The team is ready to run n’ gun and shock those who didn’t even know Pierce had a team.

“Yeah we have a girls team and we actually have potential,” Ferguson said. “I just want to surprise people with the way we come this season.”

The women’s basketball team will have their first game at home versus Compton this Saturday at 1 p.m.