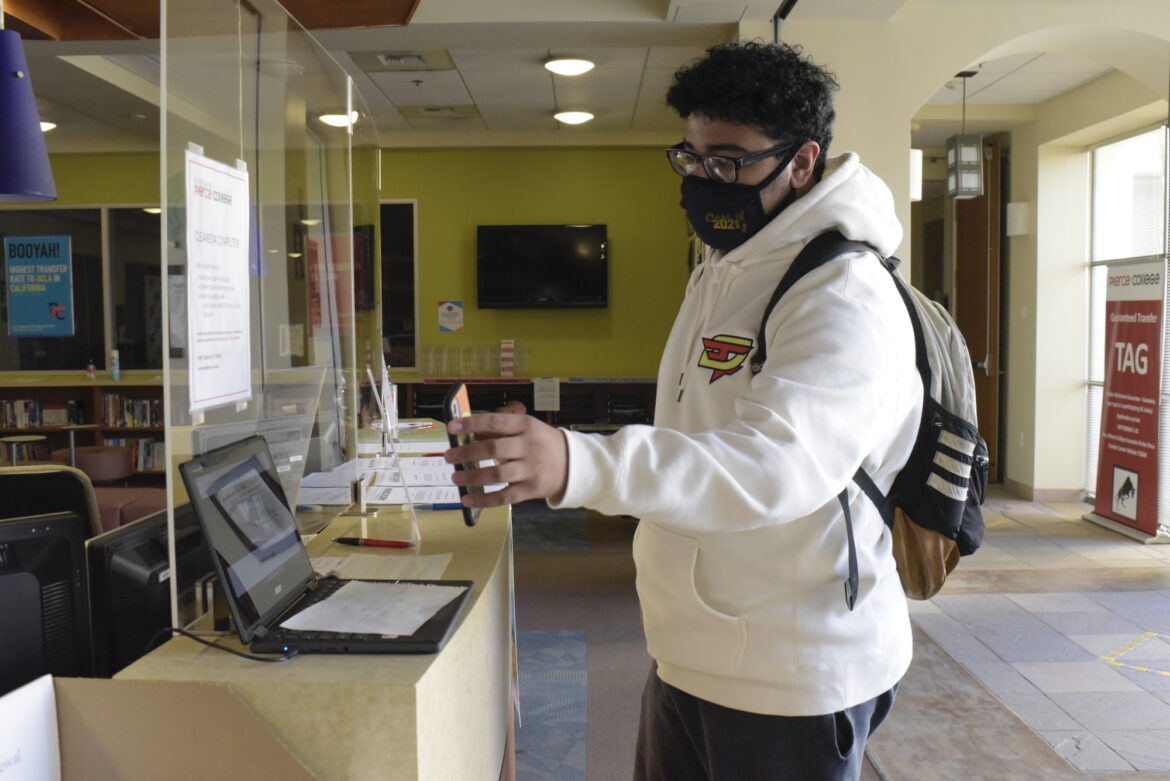 Student Services and the Library at Pierce College have incorporated a new QR scanner to help employees review Cleared4 codes.

Library Department Chair Lauren Saslow said that students who regularly visit the library have no difficulty with the checkpoint. But she also said that there are some issues with the COVID check-in system.

“There’s a lot of hiccups still,” Saslow said. “A lot of students aren’t aware that they’ve gotten the email or the text about Cleared4, so that’s been hard to help students locate that email and get that all set up.”

Saslow said that the system had been mostly working efficiently in tracking which students entered the building, and that had made it much easier for faculty.

If people don’t have their QR code on hand at Student Services, they could fill out and submit a physical form of the questionnaire before asking for what they need.

But Career Guidance counselor assistant Nasha Avijeh said that the physical forms and students’ lack of awareness is an issue where more efficient methods to track students through ID would make things easier and more comfortable for them.

“Certain obstacles would be students coming in and not doing the survey, and I think the way we could take care of that is if we had a system that would verify through student ID which could result in a much easier system,” Avijeh said.

Saslow also said that students had encountered difficulty when it came to accessing their private link through their email.

“We tell people to go into the settings and switch it,” Saslow said. “We find that the email that you get each day is problematic because when you click on the link, you’d have to copy the URL and paste it.”

With the new scanning system set in place, some students said they feel safer while others said they don’t understand how it’s efficient.

Student Ivan Mendez said that implementing the vaccine mandate was the go-to move, but he doesn’t understand what the check-in points relating to the questionnaire are about.

“We already had to submit something saying we are vaccinated, but I wouldn’t have a problem with having to do the survey,” Mendez said. “It just seems more of a hassle than anything.”

Some students said that they appreciated the measures Pierce has taken to ensure safety on campus.

Student Jina Kim said that the check-ins feel like a useful addition to the campus.

“I actually really like it,” Kim said. “I think it’s a smart way to make sure all the students don’t have symptoms and it’s effective.”

Student George Estrada said that although he didn’t utilize the library or any of the resources at school, he feels safe knowing that Pierce is taking precautions.

“I feel like that definitely makes me, as a student, feel more comfortable coming into school,” Estrada said. “But I do agree with the vaccine mandate, and I feel like just as long as you’re vaccinated you should be fine coming in.”

According to Saslow, there are issues with the surveys including how transparent people are when they fill it out daily, how it is being enforced on campus and whether there are consequences for not completing it.

Saslow said that some people are so used to answering no to those questions that if they do have an issue, it becomes a major concern.

“I even got used to answering no to all the questions and I have to stop myself,” Saslow said. “I know people who have done that, and even one person who had results pending did that. They later found out that they were positive for COVID.”

Student Nelson Solares said that though he feels the campus is not doing enough to enforce measures, students should take more initiative to fill in the gaps.

“It’s one thing to depend on having people check on others, but I think as students we should check ourselves,” Solares said. “I don’t really see that happening at Pierce.”

As for other administrative buildings like the Center for Academic Success building, employees at the front desk are asking students to show their QR code without scanning them.

CAS Office Manager Marcos Garcia said that although there are only a few students who occasionally enter into the building, having the scanners will probably benefit the tutoring center once they start expanding in the spring because CAS Tutoring Director Crystal Kiekel plans on adding a few more tutors for in-person services.

“We could help with adjusting,” Avijeh said. “A lot of students we had who are older or have difficulties with technology, and maybe we could have someone designated here to just help with the technological issues. I think that would help a lot with the transition.”