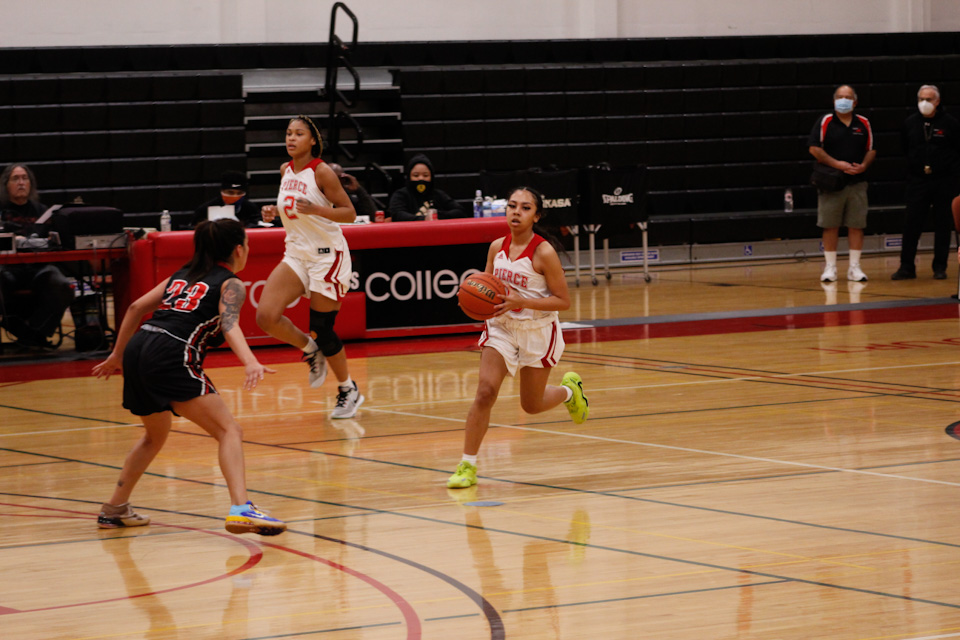 After having seasons canceled due to shortage of players and the COVID-19 pandemic, women’s basketball made their return to the court.

Despite losing their last 16 games of the season, the women’s basketball team remains hopeful and enthusiastic for next season.

While the women’s basketball team finished the season with a 2-19 record, they overcame many struggles throughout the 2021-2022 season.

Typically, college programs develop their players in the off-season, and have returning players improve on their play and provide leadership for the incoming freshman and new players.

However, the women’s basketball team didn’t have that luxury in the 2021-22 season, since they only had two returning players, while many of the new players had limited experience of playing collegiate basketball.

Head Coach Charles White said this season was important as a developmental year for the women’s basketball program, since the program was in rough shape following the effects of the pandemic and limited sports participation at the school.

“A major disadvantage of the women’s team this year was this season essentially being the inaugural year or re-startup program,” White said. “They didn’t have a chance to do off-season basketball, which is a beautiful thing we can now do for next season, in which we can develop the players and their skills”.

White was trusted with a difficult task this year, having to recruit almost an entirely new team while dealing with the effects of COVID-19 pandemic.

Guard Izzy Ferguson said playing on the team was new to her.

“Getting the feel for playing college basketball as a freshman and during COVID-19 but it felt good,” Ferguson said. “COVID-19 really restricted a lot, with all of us having being vaccinated and tested weekly, which led to it being all over the place but the team was there and ready to play.”

Covid-19 impacted all sports, however the women’s basketball team struggled to start the season well.

“The way the team was formed during COVID-19 was very stressful because we were trying to get everyone together and dedicated to staying and putting the work in throughout the season,” small forward and center Kay Fisher said.

Players and coaches agreed that the pandemic had an impact on fan attendance and player availability.

“In the beginning of the season we were allowed to have fans, however by mid-season fans weren’t allowed to watch us,” Fisher said. “You could see the difference in games when you have people in the stands cheering for you.”

The effects of fan attendance and in-person support were visible to fans and players alike.

“While the silence might work for some players, personally I feel like having fans and people there helps us play better and gets more energy and enthusiasm for the team,” Fisher said.

Despite losing almost all of their games this season, many of the players sensed a shift in team comradery and an overall improvement in teamwork after the Oxnard games.

“The game that turned everything around was the Oxnard game, since we lost two people from our team which shortened our players, rotations, and subs and dropped a lot of things we had going but we adjusted,” Fisher said. “One thing I noticed was everyone came out of their shells and got comfortable in the game, and finally had fun together.”

While playing during an overwhelming losing streak would test many players’ resolve, the women’s basketball team fought on.

“Those last six games were amazing as a team,” Fisher said. “One thing that they can’t take away from us that we played as a team during that final stretch and while we all had our individual highlights, coming out on top as a team beats all of that.”

Ferguson agreed with Fisher that the team built something special towards the last part of the season.

“We created a family during the last six games of the season,” Ferguson said.

Ferguson and many of the other new players look to improve a lot on their game this off-season.

“I played three years in high school  so I’ve had competition and I know how to compete, but this was my first year as point guard,” Ferguson said. “Having the minutes and taking the game in my hand was a great experience.”

While the women’s basketball season didn’t go as expected, many of the players and coaches share a positive outlook for the off-season and look forward to a successful and improved 2022-23.