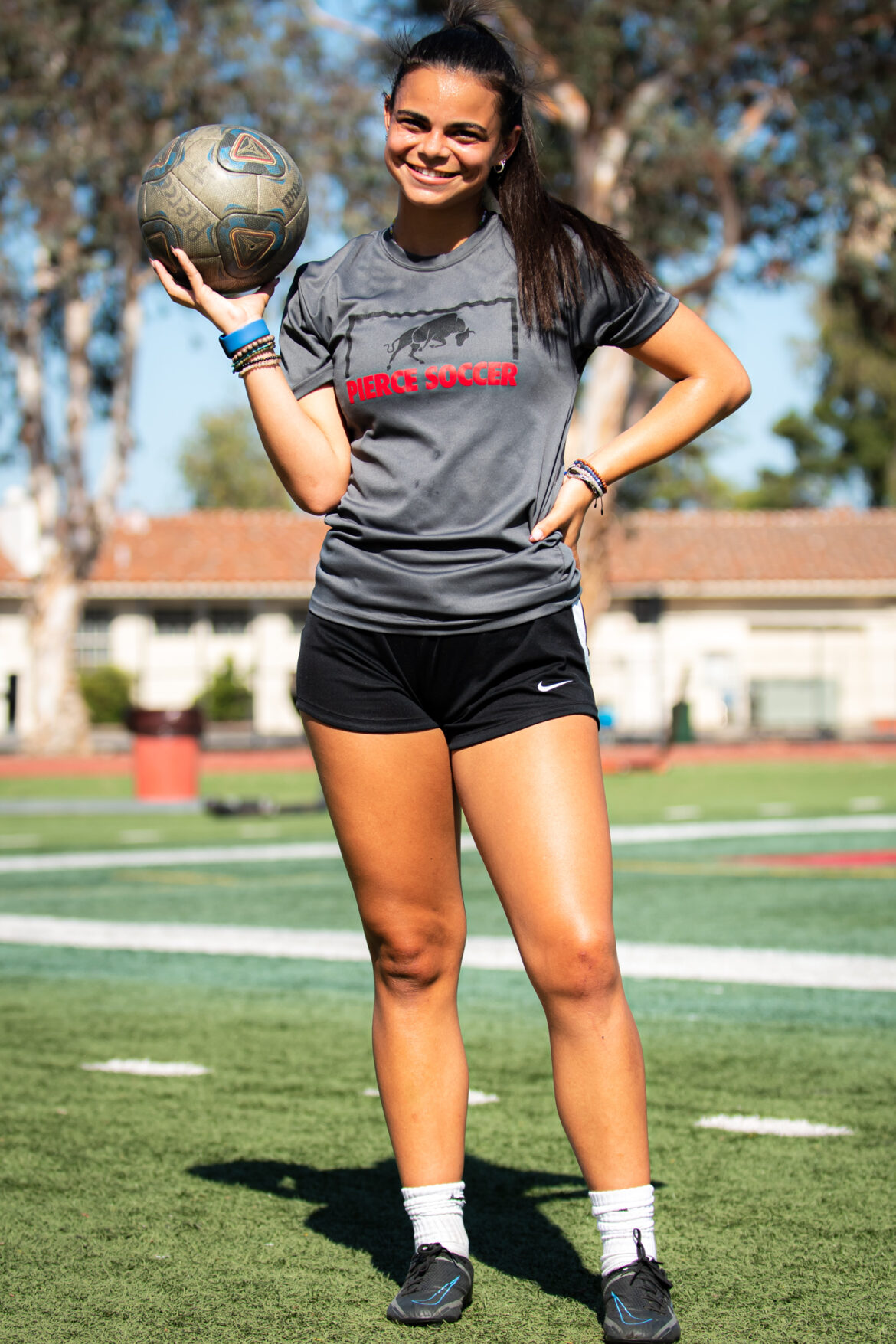 Hayley Villafane may be a Pierce College business major, but she can really kick a ball, according to her circle of friends and her coach, which she’s been doing since she was five.

But, her soccer life took off when she met her coach, Adolfo Perez, in high school.

She played in her school’s club, an alternative sports option for students who have more of a competitive drive.

Perez also said that Villafane underwent a severe knee surgery that still affects her. But, he points out that she doesn’t let her physical disadvantages hold her back.

“She’s stubborn, but she hasn’t recovered yet,” Perez said. “She literally played last year with one leg. She’s so strong that she did not complain once.”

Injured knees aren’t the only thing that affected Villafane’s time on the team. She spent her first year at Pierce online, during the COVID-19 lockdown.

“Overall, (being in lockdown) was kind of a bummer, but it never set me back,” Villafane said. “I missed my prom and my graduation. But, at the same time, it was good because I was able to go to Pierce, and now I am able to transfer out to University of California, Los Angeles (UCLA). I feel like that wouldn’t have happened if COVID didn’t happen.”

One of her best friends and teammates, Natalia Puccio, thinks that Villafane being on the team was a major contributing factor when it came to making it to the playoffs.

“Hayley is a really strong midfielder because of her size, and she’s really good on the ball,” Puccio said. “She’s a very smart player, too. When she gets the ball, she thinks about where she’s going to play it before she plays it and what’s going to happen.”

Villafane and Puccio went to high school together, and Puccio said she was astounded by Villafane’s playing skills even back then.

“I remember our first game. It was an alumni game. She scored a banger from 40 yards out. It was so nice,” Puccio said.

In Villafane’s opinion, the team did quite a bit better than she thought they would under her guidance.

Still, a Brahma championship was something that never came to be.

“It was a lot of pressure, but we did our best. I feel like it is what it is,” Villafane said.

Villafane said that she does not plan to continue playing soccer after she transfers. Instead, she will major in business economics.

Puccio is proud of Villafane’s accomplishments.

“I don’t think any of my friends have ever been to a level as high as university,” Puccio said. “I think it’s definitely deserved. She worked so hard to get there.”

Villafane was the first to welcome another of her best friends, Arianna Vigil, to her team. Vigil sees Villafane’s accomplishment as something that should serve as an example for others.

“She shows the rest of the teammates that they can transfer to a nice school,” Vigil said. “Hopefully, that gives them the encouragement to do what Hayley does. She’s a good leader, she always has a smile on her face, and she brings the team up whenever they’re down.”

“I think it’s going to go well,” she said. “If you stay on top of your work, do your homework and stay focused, the odds of you transferring are higher than they were coming out of high school.”