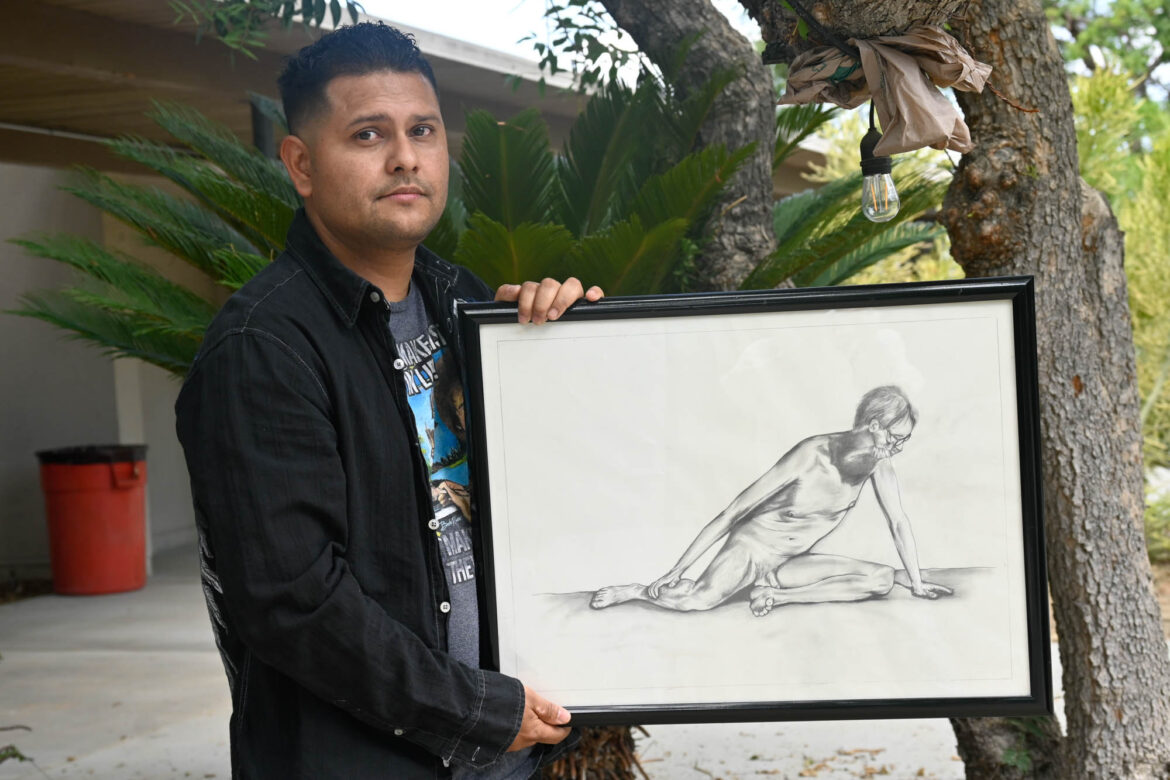 Cesar Guandique creates a portrait on a canvas as he’s surrounded by the open, calm outdoor space of the Fine Arts quad that he has gotten familiar with for the last six years.

He studies a reflection of himself, with every word and expression carefully thought out, as he recollects the memories of his past semester.

“That semester I found out that I had stage 4 thyroid cancer,” Guandique said. “The project was based on our life experiences for our finals. It was one of those moments when you’re thinking you’re back in school and you’re gonna finish, then mid-semester you get diagnosed with cancer. I had to go through therapy and miss class. The painting is based on being ill but feeling good at the same time.”

The painting Guandique noted that he can’t recall the name but he said that piece is only half of a bigger artwork. Additionally, he said it depicts the view of an exposed heart through a transparent exterior with blood painting the water as it turns purple the further it goes out. The hands first appear to be in distress to anyone else, but according to him, they are in the process of cleansing.

“I was going through a diagnosis,” Guandique said. “My mind was foggy during treatments, and the piece was based on my medical illness and how I felt on the exterior and the interior, where I felt I didn’t have a normal functioning body. But I felt like I had a lot of heart and spirit, so I felt happy even though I was going through medical changes and physically I wasn’t feeling well.”

While having cancer, Guadique said that he had to endure other issues and how he was able to stay on track with the support of his mom and sister.

“During my illness, I had some treatments and I lost my home,” Guandique said. “I got sick with coronavirus at one point and thank God for my mom and sister, because she provided me with a place to stay, and I was able to get back here and go back to school and find a job at the same time.”

Guandique’s art is a portal to his introspection, and it’s revealed in his untitled piece that depicts two hands and a heart.

To describe the nameless portrait that features two hands and a heart would be to put the observer to step inside Guandique’s footprints, where he’s excited to start a new semester, only to find out a diagnosis of a malignant tumor can change all future plans mid-semester and he  starts missing classes to devote all energy into fighting to stay alive. This piece he said represents acceptance of his situation.

“It’s what I was feeling at the time, and I didn’t know what was going to happen and I wasn’t afraid either,” he said.

He speaks fondly of the lion fighting through its scars, with hope gleaming from its eyes with shades of blue surrounding its pupils, and he mentions how it is representative of his confidence and trust in the Almighty. Although it’s crude by design, Guandique said he left it like that on purpose to share how this ceramic sculpture is symbolic of the pain he’s endured.

“It was around the same time I did the painting that I was going to Valley College for ceramics class,” Guandique said. “This one is part of a lion that’s just fighting through the scars but still seeing hope. So I painted the eyes blue and left him a little rough because that is how I was feeling at that time. I had a lot of physical pain and injuries but I still felt strong.”

And like the lion, Guandique said no matter what happens he’s gonna get through it and seek the light inside the darkness that engulfs him.

Guandique’s cancer is in remission and the scar on his neck is a reminder of his victory. He said it feels good to be experiencing college life after surviving cancer.

“To go through a couple of life changing events, it only makes everything taste, look and feel better,” he said.

As a recipient of Pierce College’s “Recognition and Demonstrative Promise in Art” Award last May, Guandique said he feels blessed for the opportunity.

Pierce Art Gallery Director Constance Kocs said Guandique was pushing his own limits while in her class. She said that his open mindedness, curiosity and positive attitude allowed him to flourish.

“The work he did that was the strongest was the work that did come from sort of a personal place,” Kocs said. “His best work is going to be work that isn’t trying to meet some outside standard but that is genuinely inspired by what’s inside.”

Pierce College professor Justin Dahlberg believes success will come to Guandique because of his talent, a great work ethic and optimistic nature. According to Dahlberg Guandique’s art is also a reflection of him.

“His art has a lot to say and I think he does too,” Dahlberg said.

Pierce Arts Department Chair Melody Cooper  wants to see him get his degree in art and possibly become a teacher because she sees Guandique as a community builder and someone who can gather people together.

“Autumn” was one of the art pieces that won him the award last semester. It’s an abstract of a European landscape in the fall, where it pulls the viewer in with vibrant colors and strong linework.

“I love brilliant colors, and I often like to paint in the dark because the light feels very strong against my eyes,” Guandique said. “Like maybe I can see too much and it bothers my eyesight, and when I was doing this, it was a scene of a European area that had a lake during the autumn season and I had to create it into an abstract.”

And when he was asked by people as to why “Autumn” wasn’t finished, or presented in a square or round frame he said it was representative of nature.

“I wanted it to be like nature. Just let it flow freely and let it be,” Guandique said. “The way I see nature is that everything is alive.”

When asked about what inspires him to draw, he sat in quiet thought, as each breath of his became heavier than the last. An apology falls out of his mouth and then a tear trails down his cheek, following a long pause until he breaks the silence.

“I just think about my mom,” Guandique said. “During the time I was sick, she wasn’t well. And every time I think about that, it makes me feel more inspired.”