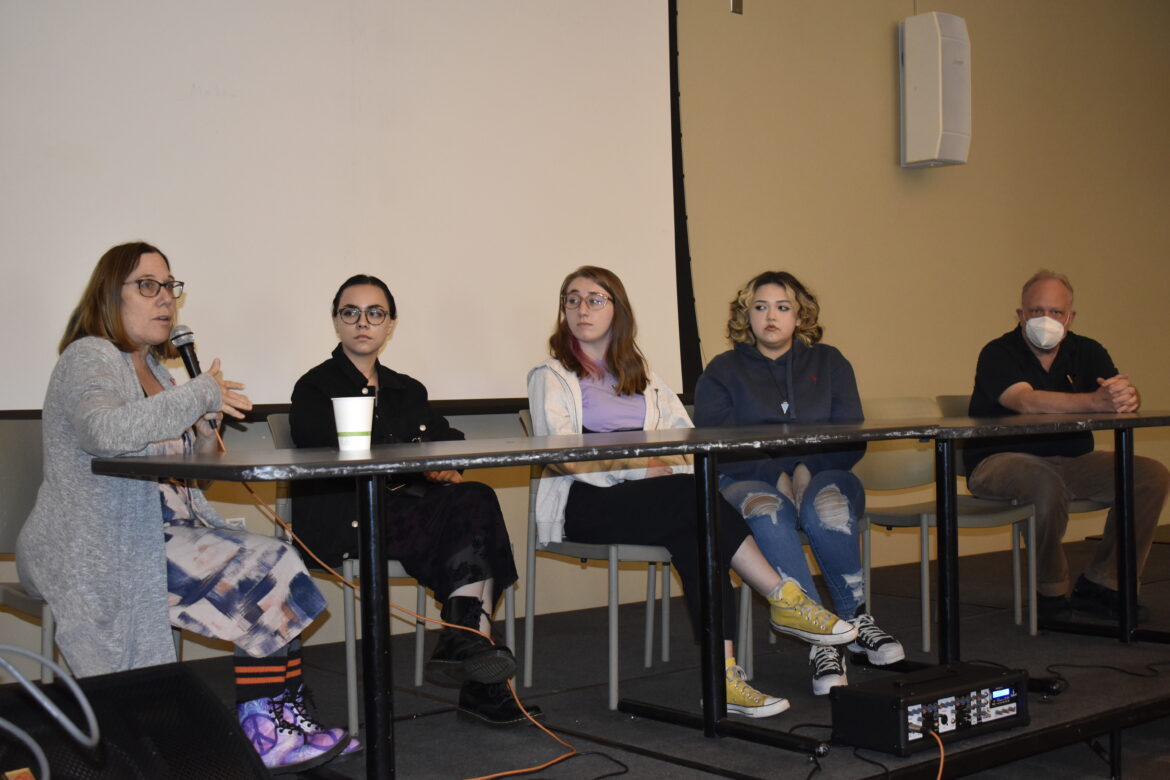 The Political Film Festival was held on Thursday in the Great Hall which featured two films about abortion, a guest speaker from Planned Parenthood and booths with health and voting resources for students.

Political Science professor and adviser for the Pierce College Democrats Denise Robb said that  what she wanted students to take away from the event is to learn how to advocate for themselves.

“It doesn’t have to be abortion rights—it could be student debt relief or anything important that they want to advocate for,” Robb said.

The event started with information from the Student Health Center. Students were informed of all the services that the Center provides, including but not limited to cancer screenings, birth control, first aid, assessment and diagnosis of acute medical problems, headache medicine, condoms and feminine hygiene products.

The Health Center offers up to six free therapy sessions.

“We have had a lot of students since that pandemic that really need therapy,” said Robb. “It has been really hard sitting alone in their bedrooms with no contact with humans.”

Jamie Kennerk who works as the Public Affairs Special for the Planned Parenthood Advocacy Project of Los Angeles gave a presentation on how to introduce new bills and on how to lobby.

Kennerk also talked about Proposition 1, which would establish a constitutional right to reproductive freedom in California.

Kennerk also stressed how after the SCOTUS decision on Dobbs v. Jackson Women’s Health Organization, every vote counts and that a movement for change will involve a combination of things such as conversations, donations and politics.

The first film of the afternoon, “Never Rarely Sometimes Always,” is an independent award-winning drama.

The panelists discussed some of the themes of the movie, such as poverty and how difficult it is to get an abortion when money is an object. Windrum addressed how the movie depicted “quasi-prostitution” in a patriarchal society.

Panelists discussed Crisis Pregnancy Centers and how they deceived the protagonist of the film and people in real life. A scene in “Never Rarely Sometimes Maybe” also showed anti-abortion demonstrators outside of a Manhattan clinic, and Robb recounted the time that nuns through rosaries at her when she had her own abortion.

The second film of the afternoon was the comedy “Obvious Child” starring Jenny Slate.

Windrum talked to Robb and they agreed to tackle the abortion issue after the SCOTUS decision. He suggested “Never Rarely Sometimes Always” and “Obvious Child.”

“I think they make a good double bill,” Windrum said. “I can’t think of too many other issues worth talking about.”

International Business major Jordan Reyes said that the first movie was a lot heavier and showed him new perspectives.

“It was really eye opening,” Reyes said. “When it comes to films bringing in political topics, it is a great way to introduce new points of view.”

Miller said that she thought “Obvious Child” was a good romantic comedy film that made light of a serious topic.

“I like the idea that a serious topic can be made in a funny, comedic light,” Miller said. “And that is important especially in these serious topics that are hard to talk about politically.”

The festival provided free lunch to the attendees, which included sandwiches, snacks and burritos from Sharky’s.

Condoms and other swag were provided at the booths for the students to take home.