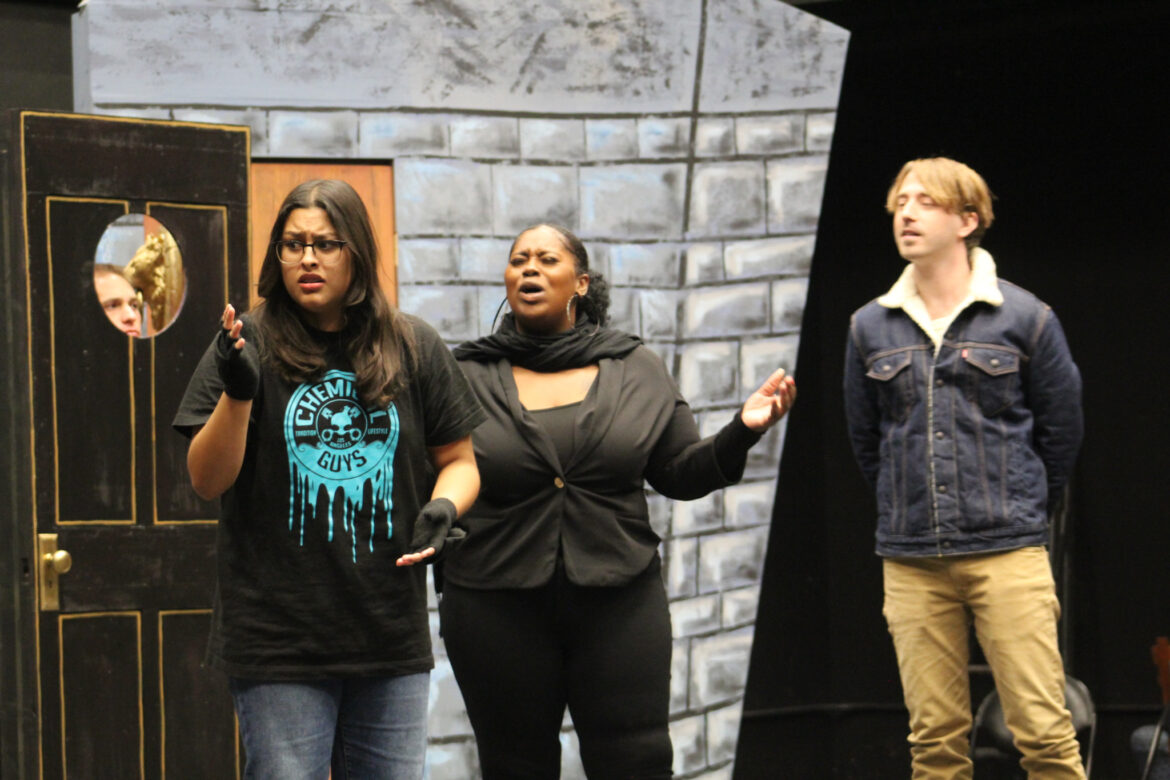 If you are stressed out over upcoming finals, or if you have spent too much time Christmas shopping on Cyber Monday, perhaps it is time to buy a ticket to “Inspecting Carol” and get your laugh on.

“Inspecting Carol” was written in 1991 by Daniel J. Sullivan. It is a variation on a famous satirical 1836 play called The “Inspector General,” by the Russian dramatist Nikoli Gogol. It also has elements of “A Christmas Carol.”

“If you are looking for an evening of fun slapstick comedy, laugh out loud jokes, then this is the perfect play for you,” said Adjunct professor of Theater Arts and Director of the play Esdras Toussaint.

“Inspecting Carol” is a farce about a small theater company in the Midwest that usually puts up a production of “A Christmas Carol.”

The company is not doing very well financially, and they are expecting a fund from the National Endowment of the Arts. They are waiting for an inspector to come and check out the company before they are rewarded the funds.

However, when an actor walks in looking for work, they think that he is the inspector. Mistaken identity hijinks ensues.

“It is about the mistakes that happen in theater,” Toussaint said. “For people who like fun things like slapstick comedy that you would see on Saturday Night Live, this would be a fun play.”

The play fits the theme of the holiday season.

“Oftentimes around this time of the year we like to do something that is holiday related, but you can only do “A Christmas Carol” so many times,” said Managing Director Michael Sande. “This is one of those madcap kind of things where everything is crazy.”

Toussaint said that it is a fun piece to be working on with this talented group of students.

“We are a cast of 12, and I can honestly say that each and every one of our students have improved their acting abilities since we started the process three months ago,” he said.

Theater major Whitney Evans will play a character that was originally written as a man. The role was changed to a woman named Wanda.

“It is not an all white cast like the play when it was originally written,” Evans said.

She said that “Inspecting Carol” shows the struggle of everyday people in theater.

“It is whacky,” Evans said. “It shows you how imperfect people can be.”

The costumes were designed by Dance professor Eileen R. Gizienski.

“There are at least 24 costume changes– maybe more,” Toussaint said.

“The play is about a theater company that does not have much money– you are going to be looking at costumes that are purposefully bad,” Sande said. “They look that way to be funny.”

“Inspecting Carol” is a tech-heavy play that has many light and sound cues. Parts of the stage will be falling apart and things coming out of the stage.

“The audience should not know what to expect or when to expect it,” Toussaint said.

He also said that he has a great crew of technicians and designers.

Every year, the theater department gets together and nominates about four plays that they think would be right for the season.

Esdras said that they look for a lot of things such as plays that can be cast from the student actors and plays that will challenge them and increase their acting ability.

“We look for plays that will be accepted by our community and we are looking for diversity,” Toussaint said.

They picked plays that would give relief and an escape from everyday occurrences, and “Inspecting Carol” is one of these plays.

“During the pandemic, we had the summer of protests around the country, so we picked plays that were about what was happening in society because that was in the front of the minds of everyone,” Toussaint said. “After the pandemic, we felt that our students needed a break from the seriousness of that.”

“Inspecting Carol” is scheduled to run from Dec. 2-11 at the Dow Arena Theatre at Pierce College.