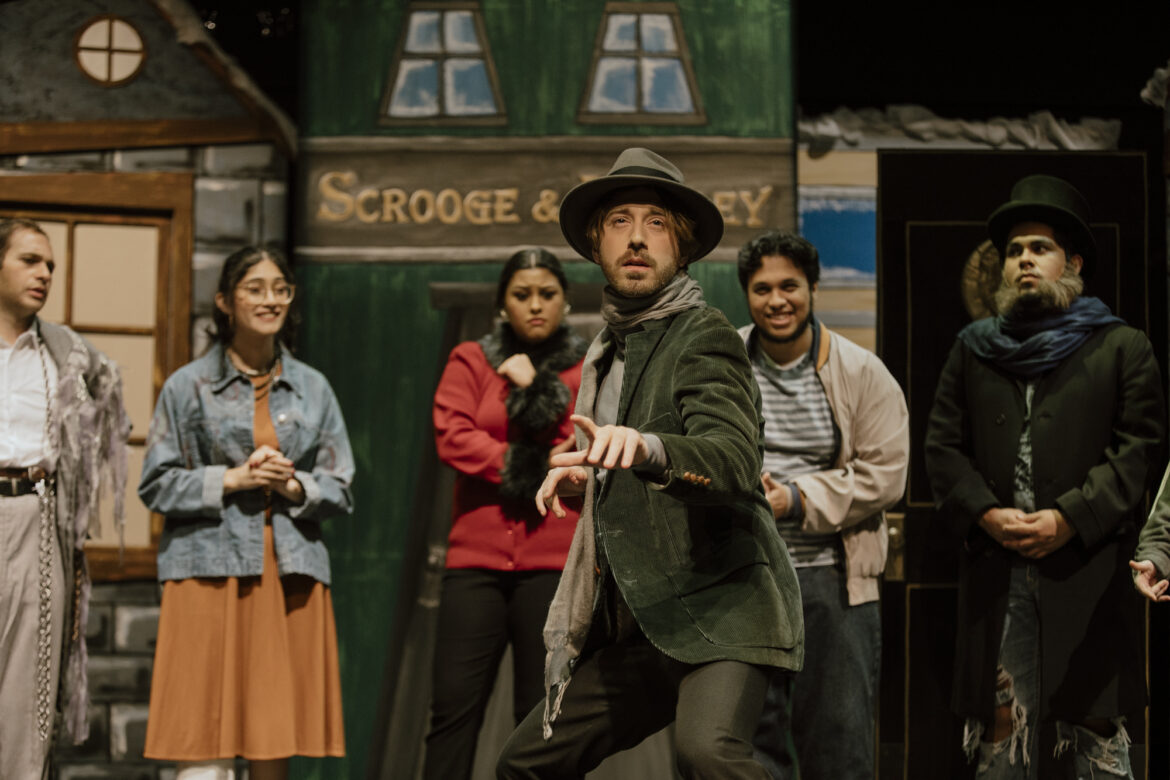 During the holidays, people get a little crazy with shopping and getting ready to have friends and family over. If you need help getting into those frenzied feelings, the Pierce College Theatre Department has a show for you.

The play runs through Dec. 11 at the Dow Arena Theatre at Pierce College.

The stage is peppered with cardboard cutouts of buildings, designed by Frederica Nascimento, and it boasts a familiar sight for those familiar with “A Christmas Carol”—the Scrooge and Marley bank building.

But despite its lack of complexity, the cardboard town is not what it seems at first. The set is not of a town, but of the stage of the “Christmas Carol” play.

“Inspecting Carol” is a meta presentation of the crew behind the Charles Dickens story, and stars members of a sort of actors’ union struggling to prepare for an upcoming performance.

As such, the play opens behind the scenes in the Soapbox PlayHouse, featuring actors bickering about protests in South America while arguing over where they’re supposed to be during the play.

Kevin Emory (Dale Van Slyke) says that the Soapbox is not financially stable enough to host the upcoming play. “Penniless!” he screamed.

After the Union members undertake the first rehearsal, Emory mistakes an aspiring actor, Wayne Wellacre (Ryan Snyders) for an inspector for the National Endowment for the Arts, who could take away their grant money and shut them down.

This scene gives Snyders a little time to shine and show off his acting skills.

The company believes Wellacre is pretending to be an actor, so they put him in the play and chaos ensues.

The acting during most parts is a little over the top, but the actors give off energy that reflects a certain amount of effort, especially with Betty Andrews (Pantea Kiani).

The performances of Wanda Parsons (Whitney Evans) and Slyke come off as a bit more calm and collected.

Prop master Rory Cohen shines from backstage, thanks to several funny creations such as a turkey that keeps showing up at weird places and Luther Beatty (Bella Bitran) uses a crutch that is too big.

As “Inspecting” goes on, the characters rehearse for their performance in “A Christmas Carol,” with each rehearsal being disrupted with humorous antics.

The second act serves as the final rehearsal, supposedly showing the play within the play as its final product, until something humorous once again interrupts them, throwing them back into disarray and forcing them to overcome their problems.

Spending a couple of hours away from your hectic holiday activities is a good way to kick off the Christmas season.