While national surveys demonstate a continued discrepancy in the male to female gender ratio among college faculty, Pierce College is changing that trend.

Thank you to an administration that has hired for the educational value of their instructors rather than for the traditional gender and ethnic stereotypes.

With a student population as diverse as the one on campus, we would expect nothing less.

So, now we must keep up the practice and focus on continuing to push the hiring of a diversified faculty and staff.

Push for the entrance of women into fields they have not traditionally been considered for, like science and mathematics.

With the hiring of new women for the 2006-2007 academic year, Pierce seems to be on the right track. 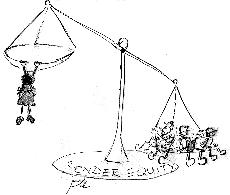