If anything needs saving in “Terminator Salvation,” it is not the human resistance, but the script, directing, and everything in between.

Terminator Salvation is the fourth installment in the long-standing battle between man and machine.

Directed by McG, infamous for his work on “Charlie’s Angels,” this latest summer explosion-fest seems to have forgotten what it takes to reboot a franchise.

Here’s a hint: It takes a little more than special effects.

Oddly enough, Salvation begins with a lack of anything that goes boom. The audience is introduced to Marcus Wright (Sam Worthington), who is sitting cozily on death row for killing his brother.

A cancer-stricken scientist visits to inform him that her employer, Cyberdyne, can save him from his fate. That is, if he donates his body to the company for scientific research.

Yes, you guessed right: Marcus is actually signing his life away to the evil SkyNet to be turned into a Terminator. It is from there the audience is transported to the year 2018, and it is here we are introduced to a post-apocalyptic world, courtesy of the devious SkyNet.

We are also introduced to a grown-up John Connor, played by Batman —I’m sorry, Christian Bale. It’s hard to determine a difference between the characters, as Bale plays Connor with a flat and rugged tone. Perhaps it is due to his tough soldier attitude, but even in significant moments he fails to remove the stern face.

The most Connor demonstrates is when he confronts Marcus. It takes at least half of the movie to get to this point, and by then I challenge anyone to care for the gripping moment Marcus finds out he is a machine.

Maybe this lack of emotion is because Connor honestly has nothing really to care about, aside from his strapping combat gear.

Supporting actors are usually used to flesh out the main character, but in this film they are anything but supporting. The most contact Connor has with his pregnant wife Kate (Bryce Dallas Howard) is shown in small segments used only to showcase Bale’s kissing ability.
It would be more interesting to see his motivation for fighting these machines. A pregnant wife is a perfect tool to illustrate this, perhaps giving him a drive to save the human race.

But no, Connor was simply destined to kill Terminators with no questions asked.

Shouldn’t the audience want to know more about Connor? Shouldn’t they understand how a scraggly teen turned into a hard-edged warrior? Instead, we are given a finely molded man who shows nothing but a rough attitude.

It’s not all the actors’ fault though. All of these flaws can be blamed on a dry script that sends characters through the most insane situations, only to have them react like the machines they so desperately try to kill.

The script has Marcus stroll through a ruined Los Angeles as if the city had always looked that way. After finding some resistance members, he is informed “judgment day” has come and robots now hunt humans like animals. His response?

Well, like any normal person, the only thought on his mind is finding a working car. I’m sorry, but if I woke from a coma to find my city in ruins, I would immediately start asking questions. Maybe I would even shed a few tears.

But Terminator hybrids like Marcus don’t cry. No, they blow stuff up ? and McG makes sure there are plenty of things to blow up.

Too bad McG is fully convinced he is Michael Bay, which may be true except for the fact Bay actually knows how to direct action sequences. The scenes in Terminator Salvation that should deliver adrenaline only give something to chuckle at.

They are short, ludicrous and simply exist to show how cool it would look to have a 40-foot Terminator blow up a gas station.

A shining example of this McG logic is a sequence during whic Connor survives an ambush at an enemy installation. After escaping a Terminator base, Connor witnesses an enemy aircraft ascending into the air. Instead of running to safety and finding help, Connor immediately jumps into a helicopter to give chase.

He is in the helicopter (a Huey, which has no chance catching up to a jet-powered aircraft) for seconds until a nuclear blast sends it back spiraling to the ground. Waiting for him is a damaged Terminator.

For a few minutes Connor fights the robot and wins (of course) after pummeling it with a .50-caliber machine gun mounted on the ruined helicopter. The sequence was very flashy and mildly entertaining, but why did he get into the helicopter in the first place?
Every action sequence plays out this way, even ones that should be exhilarating. The saving grace is a cameo from a fan favorite, which even then has its ‘Why is this

It’s a shame, because “Terminator Salvation” could have been the movie to jumpstart a struggling franchise. Too bad it forgot how to be a movie in the first place 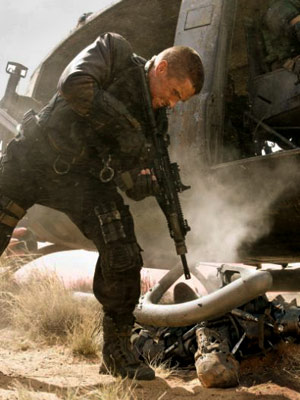