The Pierce College football season is here and it’s here in a big way.

On Saturday the Pierce team traveled to Moorpark College’s Griffin stadium, to take on the host Moorpark College Raiders. It would prove to be a successful night as Pierce would get their first win over the Raiders in 25 to 30 years according to third-year Pierce coach Efrain Martinez.

The night wouldn’t go without its sour notes though, as two Brahmas would go down with injuries. Freshman Brad Pak was injured on the opening kickoff of the game. It is believed that Pak has either a dislocated elbow or a possible fracture. Sophomore defensive end Michael Hodieb left the game in the second quarter with a right leg injury.

Even before the game the injury bug was prevalent in the Brahma camp as Kenny Davis was lost for the season with a sprained AC joint. Davis was injured during a scrimmage August 29.  Davis with his time at Pierce now concluded due to his injury plans to sign with a Division-1 program. He has schools such as Tennessee, Kansas State, Iowa, Utah and Arizona to choose from amongst others.

Coach Martinez came into the showdown with Moorpark expecting to win. After finishing last season 4-6, the team is coming into this season with goals of winning the conference and making a bowl game. He also stated how Pierce hasn’t beaten the Raiders of Moorpark in years and “thinks it is and how there is no better time than now.”

As for Moorpark coming into this season they have “an inexperienced” stated first year defensive coordinator Mike Stuart. Stuart would also say “being a young team we expect mistakes but we will learn from them.” Moorpark finished last season 4-6 including a 28-17 victory over Pierce.

Pierce would get on the board first as running back Prince Young would get into the end zone for a score. The point after attempt by Steven Sandoval however was missed, keeping the score at 6-0.

On the second Brahma possession poor special teams play would hurt Pierce again as a bad snap would lead to a blocked punt that was returned by Moorpark player Phil Johnson. Pierce would show its own ability to play special teams, on the very next snap as a host of Brahmas would break through the Raider line and block the point after attempt leaving the score deadlocked at 6.

Pierce would take the lead again at 13-6 as Ryan Dayton would throw a touchdown to the back corner of the end zone to Damon Julian. This time the conversion would sail through off the foot of Sandoval.

Once more Moorpark would answer as quarterback Darren McGee would hit Justin Bradley with deep pass down the Moorpark sideline. On the next play Bradley would get into the end zone on an end-around tying the score 13, as the kick would be good.

Pierce quarterback Matt Wabby would be sacked on fourth down setting up a 45 yard field goal by Sandoval. The kick would just have enough mustard on it to get up and over the right giving Pierce the lead at 16-13.

Pierce would regain possession after a blocked pass that was ruled a fumble. It would be overturned however as officials met to discus the Ian Shultis pass.

The ruling would prove costly as a conversion on fourth down would keep possession in the Raiders hands. Later in the same drive Shultis would throw a touchdown to Jonathan Mesa giving the Raiders their first lead of the night at 16-20.

Pierce would try to answer quickly but would be unable to as the Wabby completion to Roodlin Exalus was stopped short. After the play Wabby who was hit on the play would come up with a slight limp. Pierce would head to the locker rooms at halftime down 20-16.

To start the third quarter the Brahma defense would force a punt out of the Moorpark offense. Pierce would see it special teams struggle show up again as they would have to burn a timeout as they had too many men on the field.

Wabby would see his pass intended for Ty Harris intercepted by a Moorpark defender.

Wabby would see revenge as Brandon Turner intercepted the McGee pass. The Brahma breath would hold still as Turner would fumble but luckily for Pierce another player would recover his near mistake.

The Pierce drive would be on the legs of Wabby. They would be put in good position when a Wabby rush was aided by a facemask putting Pierce into the Raider red zone. Wabby would get into the end zone on a quarterback sneak. After the made kick by Sandoval, Pierce would be up 23-20.

The youthful Raiders would make another mistake as a McGee fumble was recovered by the Brahma defense. Pierce though would not be able to take advantage as Wabby fumbled on the goal line giving possession back to the host Moorpark Raiders.

The Raiders would see their next attempt at points miss short as the 47 yard kick would do just that.

Young would put Pierce in position for a score with a 44 yard run through the heart of the Raider defense. A bad snap on a field goal attempt proved to be golden for the Brahmas as Joseph Durant would catch the ball in traffic giving Pierce a huge first down inside the Raider 5-yardline. Wabby would sneak into the end zone pushing the Brahma lead to 30-20.

Another Moorpark drive would end in a turnover when a, Shultis pass intended for Bradley would be intercepted by Pierce player Marquis Brown.
Wabby would set himself up for another rushing touchdown by completing a deep pass down the Pierce sideline to Damon Julian. After the Wabby touchdown the scoring would be done and the final score of 37-20 would be set.

To put an exclamation point on their victory the Brahma defense would intercept another Raider pass. This time it was Brandon Turner coming away with the football. The Pierce defense kept the Moorpark offense off of the scoreboard in the second half.

After the game coach Martinez would say simply “winning solves problems.” When asked as the goes on what the team needs to do better to be successful coach Martinez said “we need to act like a better team.”

Wabby the Crespi Carmelite High School of Encino product would finish the game with three rushing touchdowns and 154 yards through the air. Wabby would give most of the credit for his performance to his offensive line and receivers.

Not to be out done by his quarterback, Young finished the game with 206 on the ground and a score. Young exploded in the second half by rushing for 136 yards.

Next up for the Scarlet and White is the home opener versus Fullerton on Saturday Sept.12 at 7pm. 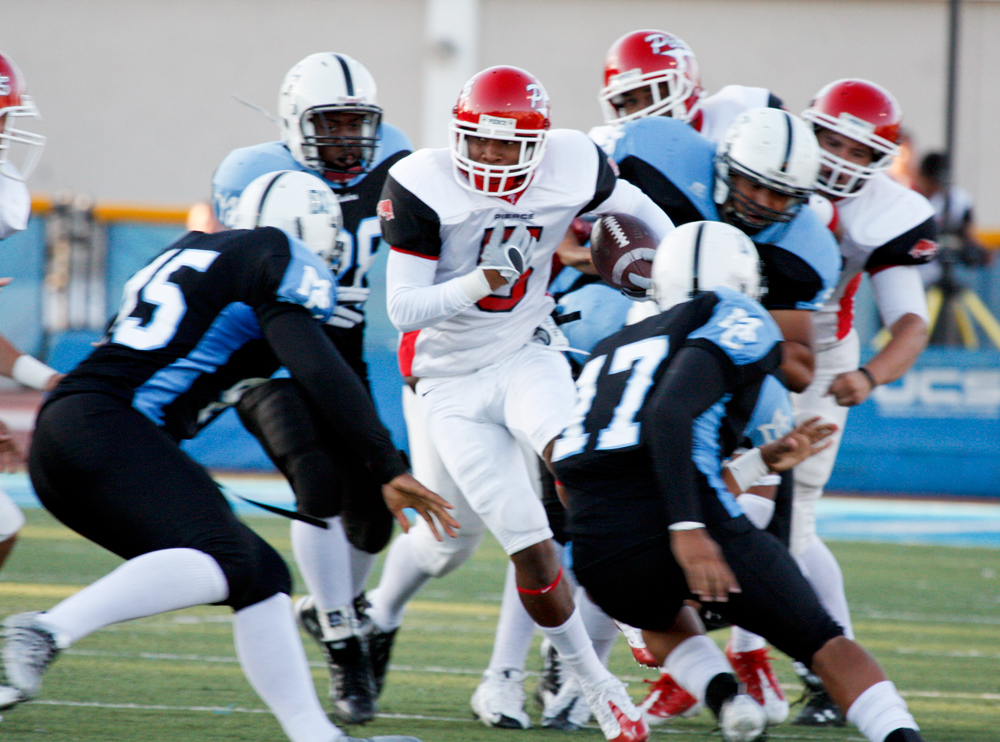 Pierce’s cornerback Brandon Turner (5) attempts a touchdown at their away game vs. Moorpark College on Saturday, September 5, 2009. Photo By (Aisha Ahal / Roundup) 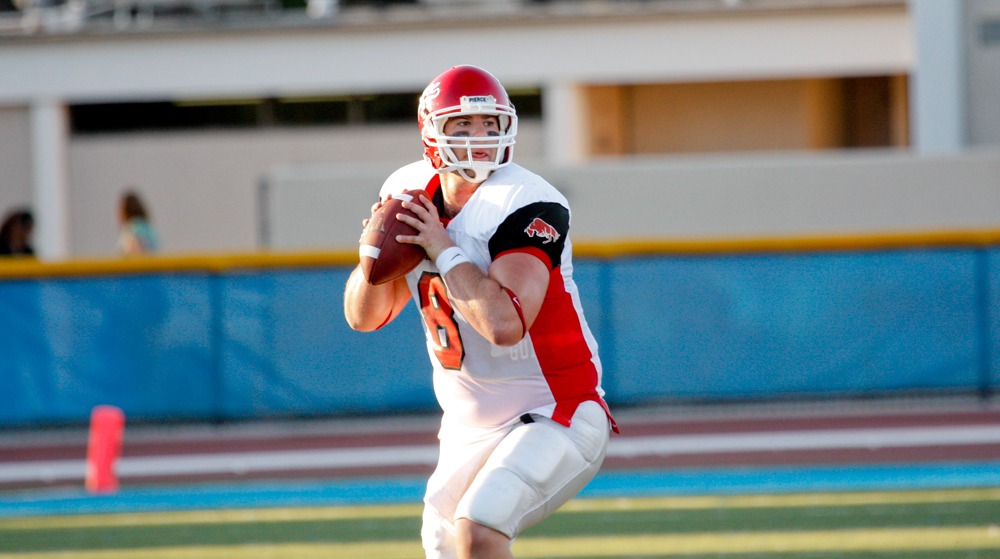 Pierce’s quarterback Matt Wabby (8) launches the ball to a fellow teammate at their away game vs. Moorpark College on Saturday, September 5, 2009. Photo By (Aisha Ahal / Roundup)