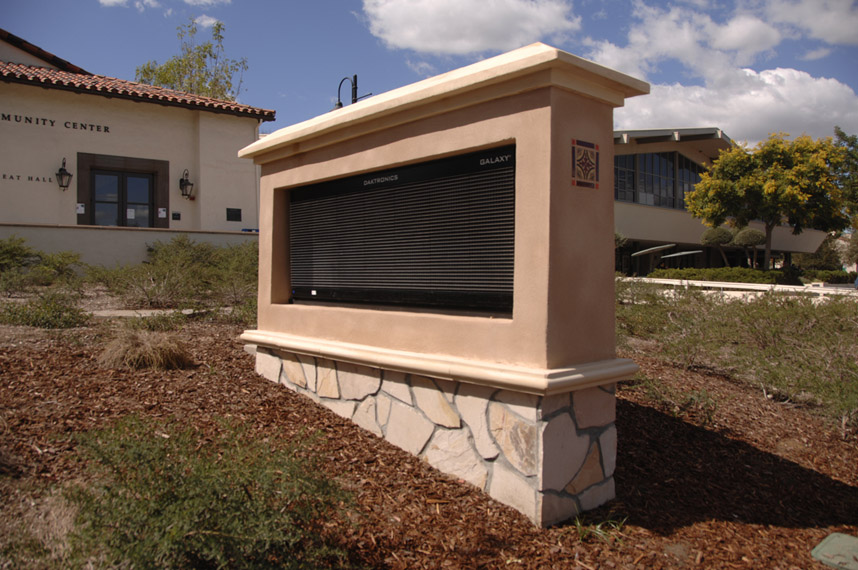 The unused marque on the mall at Pierce College in Woodland Hills on Oct. 6, 2011. Photos by William Welles

The marquee located in front of the Great Hall will be up and running by Friday, Oct. 14,  after errors in construction have delayed its completion.
The marquee, which was supposed to be completed during phase 1 of the renovations to the Mall, was not completed on time due to issues with the structure encasing the screen, according to Ed Cadena, project deputy director.
“The contractor needed to do corrective work to the enclosure portion,” said Cadena.
The marquee will hopefully begin to display information by the end of next week, according to Cadena.
The marquee will be controlled by the Associated Students Organization (ASO).
It will display information relating to ASO, events hosted by campus clubs and departments, and anything going on in the Great Hall.
Unlike the marquee located at the corner of Victory and Winnetka, this marquee will not be able to display color photos.
Its Daktronic screen, however, will be able to display different fonts and graphics in the same color, according to Director of Facilities Paul Nieman.
Share
Facebook Twitter Pinterest Linkedin