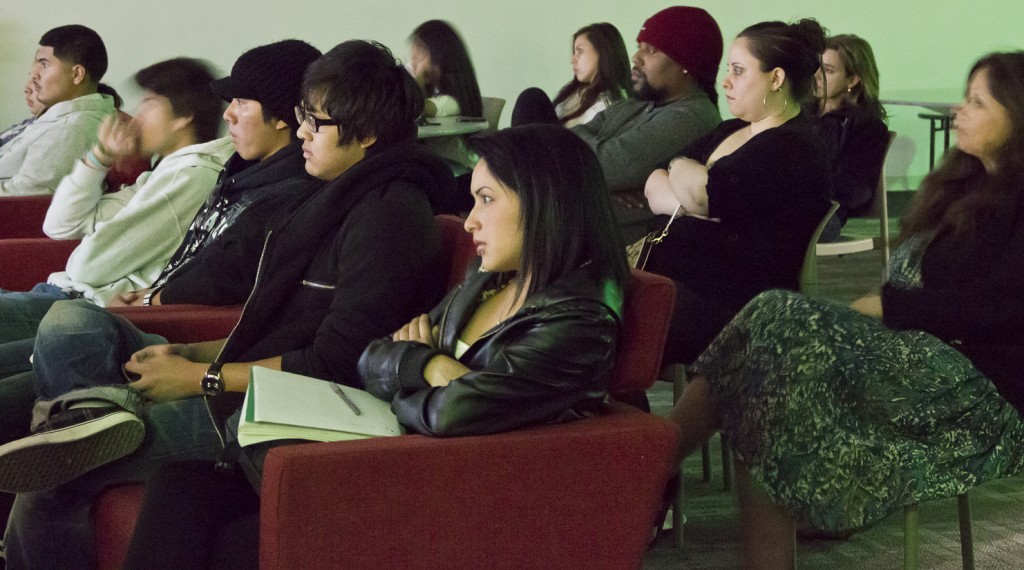 Pierce College students watch a documentary, “the Walking,” in the Great Hall on Wednesday, March 21, 2012 in Woodland Hills Calif. The documentary is about “a healing journey for war veterans and their families.” Photo: Kristen Aslanian

His eyes were dry and emotionless as he walked out of the Great Hall after watching “The Welcome.”

Around him, people have been crying and others have been on the verge of walking out of the screening.

“The Welcome,” a healing journey for war veterans and their families, was shown March 21 as part of March with Media Arts.

Cinema professor Karin Stellwagen recommended the film after seeing it at the Ojai Film Festival.

“It’s an important film that all Americas should see, and definitely people in college should see,” Stellwagen said.

However, for anyone that is interested in watching the film, Stellwagen has a few words of warning.

She describes the film as being “a real life account of what happens to individuals when they are sent to war and they come back home and don’t have enough resources or support to deal with drama that they have endured.”

The film is shot in a simple format.

There are no especial effects and nothing blows up.

Twenty-three veterans and their family attempted to start the healing procures by sharing stories and writing poems of what they did and experienced during and after the war while allowing cameras to capture everything.

Manuel Baltazar, a film major, heard about the event during his Cinema 107 class.

“I’m excited to see the film, because our instructor made it sound very cathartic,” Baltazar said.

He did not prepare emotionally for the impact that the film would have.

“It was defiantly really heavy, I don’t think I was ready for that,” Baltazar said.

His breathing changes as he recalls the part of the film where a Vietnam veteran is telling a story about a time when he was loading ammunition and does not realize that his comrades have been killed.

“I definitely have stronger empathy for the veterans, I respect them very much,” Baltazar said.

Nonetheless, it was Antonio Martinez, a psychology major, whom the film impacted on a more personal level.

Martinez did one tour to Afghanistan as combat deployment in O311 Infantry part of the 1st Battalion 5th Marine and was part of Operation Khanjar which was the largest helicopter insertion since the Vietnam War.

“I felt the same way too…it was tough, I can’t even talk to my mom or sister,” Martinez said as he breaks downs and allows some emotion to be portrayed.

He hides most of his emotion telling himself that he went in with a mission.

“The military teaches you to be tough,” Martinez said.

It is not until he continues talking about his experience after returning from war that emotional wounds begin to surface.

“I didn’t cry [during the film] I was just hiding it until I started talking about it,” Martinez said as the tears roll down his face.

His wife, Alexandra Bass, was with him during the screening and experienced multiple emotions.

“I was sad, and happy, and angry, everything hit me,” Bass said.

She knows that because she has not experienced the war she cannot understand what her husband is going through.

There will be a panel discussion with local veterans Wednesday in the Great Hall at 7 p.m.

To learn more about The Welcome visit: http://www.thewelcomethemovie.com/