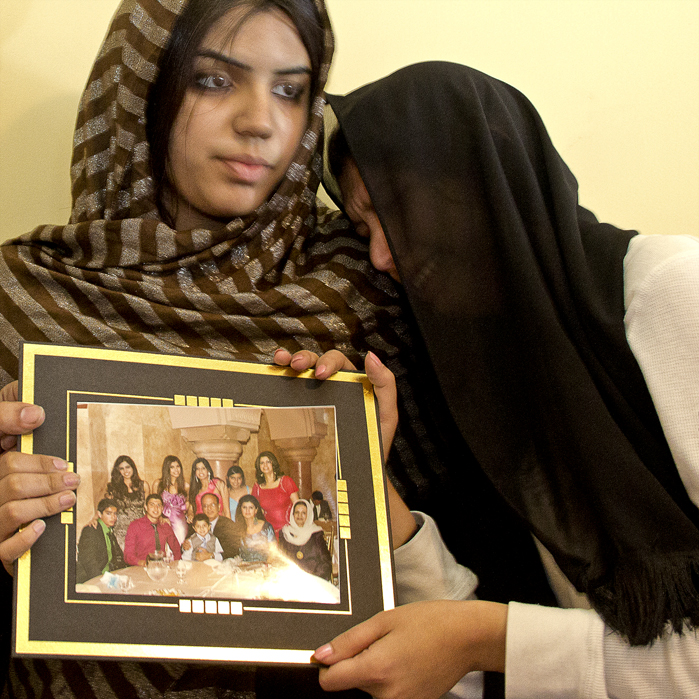 On Friday April 13, 2012, Michelle Arian (left), and Nelofar Arian (right) hold up a family portrait including Abdul Arian who is seen wearing a red dress shirt, just two days after Abdul was shot and killed by LAPD during a pursuit which ended on the 101 North-bound after running a red light and continuing to drive erratically. Photo: Kristen Aslanian

A 19-year-old college student was shot and killed by police officers Wednesday night after leading a high-speed pursuit that ended in Woodland Hills.

“The preliminary investigation indicates he did not have a gun,”  Nelofar Arian, Abdul’s sister said. “How can the LAPD defend what they did?”

Police attempted to pull over Abdul Arian Wednesday night after he failed to stop at a red light, according to police officials.

Arian fled from police leading them on a high-speed chase on the 101 freeway that ended in his death near the Canoga Avenue on ramp.

Arian called 911 during the pursuit.

“If they pull their guns, I’m going to have to pull my gun out on them,” Arian said in the conversation according to Los Angeles Police Department representatives.

In a post on his Facebook page, Arian mentions that he returned from a shooting range with his cousin.

“Got some blood on my hands,” he wrote.

In another post, Arian expressed feelings of depression, stating that he was “dying inside.”

After police pinned Arian’s vehicle, he exited through the passenger side door and fled on foot, turning and pointing at police.

The eight officers then fired 90 rounds at Arian, and he died on the scene.

Although his uncle told the LA Times that Arian was a Pierce College student, Public Relations Manager Doreen Clay said that there are no records of him taking classes at Pierce.

Arian’s friend Sonya Tabosom said that Arian was a serious and affectionate teenager.

“He was not the sort of guy to carry guns or hurt anyone,” she said. “It’s been two hours I’ve been crying.”

Tabosom met Arian at a restaurant during one of his visits in Fremont, her hometown. They have been like family ever since.

His death was a shock to her, and she could not understand why the police chose to shoot him, she said.

“My brother was a really good Guy,” Rahman Arian, Abdul’s brother, said. “Why did they kill him?”

Though he may not be a Pierce College students, other teens on campus responded to the fatal killing today.

“When you’re messing with the police and getting into a high speed pursuit, the police has to act quickly,” 19 year-old mechanical engineering major Mehran Azizi said. “If they believe they’re in danger, they will take action.”

But not all students feel the police acted justly.

“They (the police) are always judging people and pulling people over on their appearance,” Nick Moore, music major, said. “It’s unfair to shoot someone without a probable cause.”

Friends and community members have been posting on Arian’s Twitter and Facebook pages all day, as well as their own social media accounts, expressing their disbelief that his life ended this way.

They made statements such as “you didn’t deserve this” and “we fight for your name brother.”