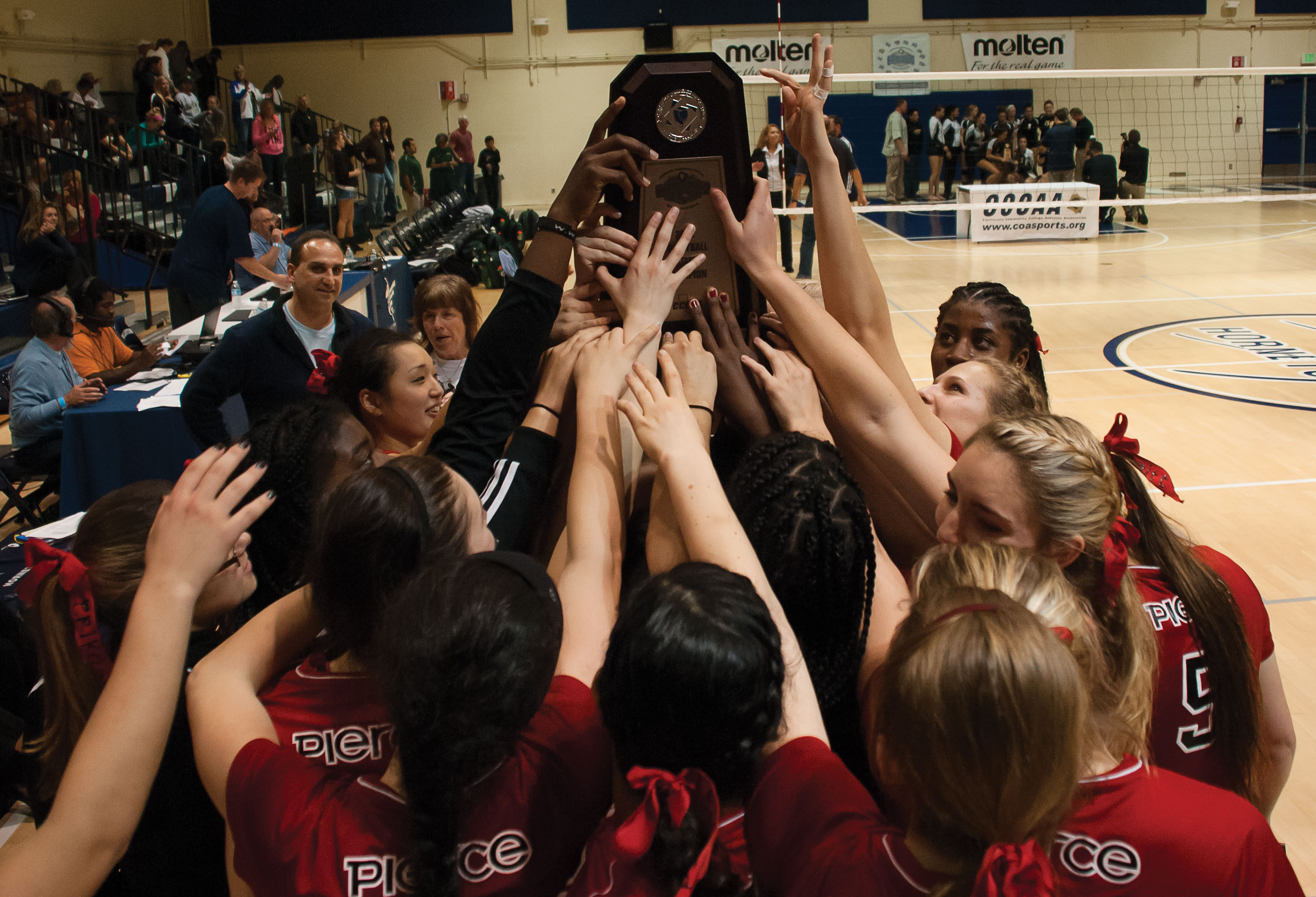 Sophomore outside hitter Sakurako Fujii was named Tournament Most Valuable Player after leading the Brahmas with 17 kills in the championship game.

“I can not say anything right now,” Fujii said after the award ceremony following the championship match. “I’m so emotional.”

No words were necessary as Fujii faced Pierce head coach Nabil Mardini and bowed after accepting her MVP award.

He then bowed as they both broke into smiles and hugged.

Mardini who can be found on the sideline with a poker face, couldn’t hold back his emotion after the game.

“The girls deserve it, I’m thrilled and I’m so happy for them,” Mardini said.

Mardini spoke of his plan to remain hands-off during the championship match.

“At this point you train them, you give them all the tools, and what they do with it is up to them,” Mardini said. “I had no doubt they would win.”

Golden West head coach William Lawler knew that his players did not play to their potential.

“We can handle them, we can hang with them, and we can beat them,” Lawler said of the Brahmas.

Lawler added that the Rustlers did not execute their gameplan enough to beat Pierce.

He was also was unpleased with the double elimination format, and felt that it contributed to Golden West’s loss.

“It’s a tough format and basically the girls are tired, “ Lawler said. “I thought they did an excellent job of giving it maximum effort.”

Pierce sophomore middle blocker Jessica Burns recognized that Golden West faced a difficult challenge having to play back-to-back games, but did not accept it as an excuse.

“We went through it yesterday, now it was their turn,” Burns said. “They couldn’t pull it out of the bag like we could.”

The victory, which extended the Brahmas winning streak to 66 consecutive matches dating back to 2010, came a day after tough battles against Santa Rosa College and Golden West on Saturday.

The Brahmas have a few more tricks to pull out of their bag as they all face finals in the weeks to come.

Pierce College President Kathleen Burke-Kelly was in the stands as the Brahmas claimed the state championship, but reminded the team that their win was only temporary.

“What we have to do is make sure they complete their academic program because that’s the really long lasting part,” Burke-Kelly said.

As the final point was scored the Brahmas gathered together one last time and chanted as they had in the previous games.

“You wish you were a Brahma,” they repeated three times.

For sophomore outside hitter and First Team AVCA All-American Danetta Boykin it would be the last time she chanted and the last time she would wear her Pierce uniform, having never lost a match at as a Brahma.

“I just can’t believe I’m done right now,” Boykin said. “That’s the hard part, I have to move on.”