According to an FBI report covering January to June 2012, violent crime was up across the U.S. At the same time, California logged 531,751 firearm background checks in the National Instant Criminal Background Check System.

Comparing the up tick in firearm background checks against the down slide in overall violent crime in California during an inclusive time frame, one could make an argument of correlation betwixt the two statistics (see infographic). 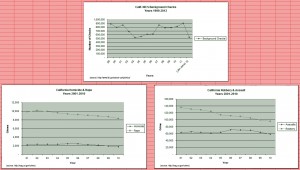 The vast majority of gun owners are good, law abiding Americans, but some of them may be mentally unstable, may not use proper gun safety or may be criminally minded.

It should be a given that someone who would murder children in school has come unhinged, but as was the case with Adam Lanza, no one predicted his path or depth of destruction.

The argument to remove guns from the streets seems highly unlikely since, as Small Arms Survey reports, as of 2007 there were approximately 270,000,000 firearms in the U.S.

If the weapons that were used in Newtown, Conn. and Columbine, Colo. had been properly secured by parents, or if existing laws restricting illegal firearm sales were properly enforced, those places of infamy would be anonymous marks on a map today.

So, while our representatives in Congress fight it out about who is more to blame for our brothers and sisters, sons and daughters being murdered in school let’s stop the bleeding by fighting firearms with firearms in schools and promoting gun safety at home.

Project ChildSafe, an undertaking by The National Shooting Sports Foundation who claims it is “The nation’s largest firearm safety education program” is where parents can obtain a gun safety kit to help prevent juvenile access to firearms in the home.

Pierce College law enforcement officials recommend three rules for students involved in a school invasion, “Run. Hide. Fight.” Run in the opposite direction form the sound of gunfire to a secure room. Hide inside the room, lock and barricade the door. Fight the active shooter only as a last resort.

”Once a school is in lockdown, ‘hide and hope’ … maximize police latitude in clearing the building.” is the recommendation of the FBI Law Enforcement Bulletin6.

Listen, the idea of armed teachers is not one of them roaming the campus hunkering down in bushes and making bird calls to other teachers during a school invasion like perilous armed citizen responders. Rather it is a solid last line of rope-a-dope defense when “hide and hope” fails.

For Mario Cruz’s take on the issue, visit https://theroundupnews.com/2013/02/11/arming-teachers-for-student-defense-con/