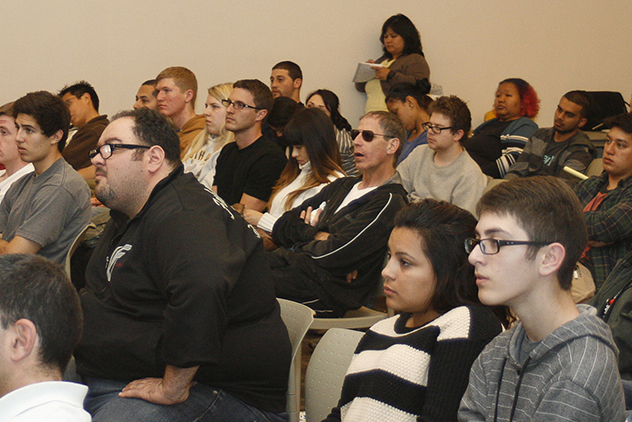 Adjunct Instructor of Media Arts Daria Matza and her husband Mark Devendorf, the film’s director, have worked on shows and feature films for major networks like NBC and PBS.

The couple won an Emmy for their work on “An Inaugural Ride to Freedom,” a documentary that covered University of Nebraska students and their trip to President Obama’s 2009 inauguration, according to Pierce Media Arts Department’s website.

They came to Pierce to present parts of their latest film “Styria,” a gothic tale about a two girls’ chaotic friendship that leads to death and hysteria taking place Budapest, Hungary.

“We chose a film that was kind of timeless,” Devendorf said. “If you see the film, it could’ve taken place 50 years ago.”

The couple shared stories of their experiences about how “Styria,” along with some obstacles they had to overcome as filmmakers came to life.

Even with their limited, $1.7 million budget, Matza said moments and mini-sagas, like tirelessly trying to replicate a unique shirt worn by an actress in a scene shot at the opposite end of the world, made it worthwhile

“It had to get done. We’ve come this far. How could we not be up at 3 a.m. ironing shirts?” Matza said. “When these things that you imagine come out even better than you expected, it’s really fulfilling.”

The Great Hall’s seats were nearly filled with students, faculty, and community members who asked questions about the film and for advice from the experienced filmmakers.

“Choose a film or subject that you are extremely passionate about because it’s going to be like a marriage,” Devendorf said. “This isn’t the best way to make money.”

The audience members, many of whom were from the Media Arts Department, seemed to be engaged in the presentation, but some attended the event for different reasons.

The Associated Students Organization (ASO) sponsored Speaker Series events are held throughout the semester. There is no cost to attend, and they normally offer free food.