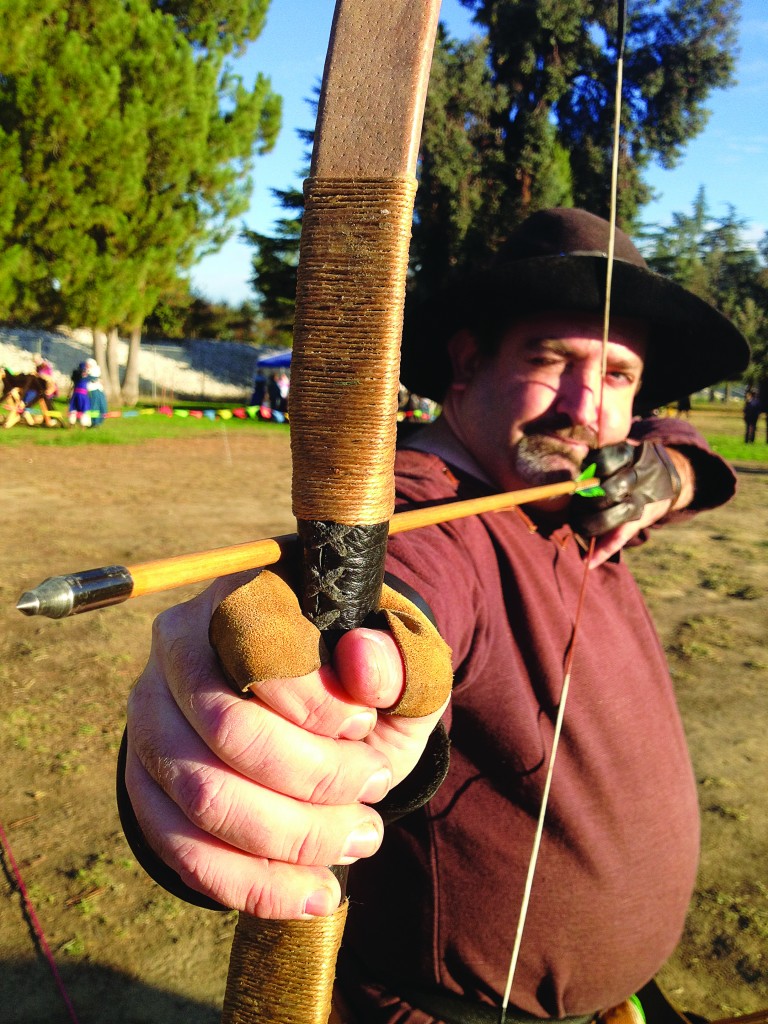 The archers take grip of their bows, select their arrows and focus on their targets 50 yards away.

The Queen’s Championship is at stake as 30 participants approach the line and take aim, pulling back on their bows’ strings.

A drop of sweat rolls down Nikolaos Phaistos’s cheek, and the wind sways his body as he holds 30 pounds of tension on his 17th century-style bow.

Arrows whistle off their bows and fly through the air, raining on their targets. After all the arrows have been fired, Phaistos saw that he had been defeated by a fraction of an inch and was out of contention to be the Queen’s Champion in archery.

Instead of dwelling on his defeat, however, Phaistos turned to his competitors and congratulated them on their success.

“Hezzah!” Phaistos shouted in celebration of his fellow patrons.

While Phaistos is out of a medieval archery tournament, Nick Sumandra can blend in with any 21st century crowd.

During the week, 40-year-old Sumandra is a sign language interpreter at Pierce College, aiding deaf or hearing-impaired students in accomplishing their educational goals. But, during his free time and weekends, he assumes his 17th century persona, Phaistos.

“Nikolaos Phaistos is a mercenary archer from the Greek island of Crete,” Sumandra said of his alternate persona. “He was hired by the Medici family to find their lost daughter, Cecilia.”

He proceeded to tell the story of finding Cecilia in Persia, but instead of returning her to her family, he joined her clan and her quest to make right in the world.

“That’s the fun part,” Sumandra said. “You can make your own history in a true historical context even though it’s not real history.”
Sumandra is a member of the Society for Creative Anachronism, a nonprofit educational organization dedicated to research and re-creation of medieval and renaissance culture, according to organization officials.

“The SCA holds archery tournaments, fencing competitions, heavy armor battles, which all lead to larger battles between kingdoms around the world in our international gatherings,” Sumandra said.

As a teen, Sumandra’s uncle taught him to shoot bows and arrows in his backyard.

“I loved archery but knew that nothing would come of it in life,” he said.

Sumandra put archery aside and, in his early 20s, began taking American Sign Language classes, which led to his current career as an interpreter at Pierce.

Then, a friend of Sumandra’s told him about the SCA, and that there were archery tournaments and medieval recreation events every weekend.

“I went to my first archery tournament and felt, right away, that I was in my element,” Sumandra said. “I went home that night and joined up.”

That was four years ago. Since then, he has become an active participant in weekly gatherings and has achieved the title of Chiron, the highest level of archery in the SCA. This position allows Sumandra to teach and train others within the organization.

He uses his signing skill when there are deaf or hearing-impaired people who want to participate in SCA festivities.

“Sure, signing is not [of the historical] period, but I want to make sure that everyone feels included and welcomed as friends,” Sumandra said. “That’s what’s important to me, to live chivalrously and take care of people, and the SCA just gives me more opportunities to do that.”

His love of archery and passion for medieval and renaissance history made joining the SCA an obvious endeavor to pursue, but his time with the organization has given him more than just a chance to dress up and shoot arrows.

“My code of behavior in life has always been based on medieval chivalry, and what has kept me going with the SCA is that chivalrous, and fun, and historical, and friendly environment it creates,” Sumandra said.

The environment is also what drew Conrad Claus — Conrad, king of Caid in the SCA world — to the organization. As king, Claus has an obligation to attend events throughout his “kingdom,” which spans California, parts of Arizona and Las Vegas.

SCA organizer Julie Lawrence, 50, also known as Meliora Deverel, baroness of Altavia, says that it is her love of history that drew her in.

“The SCA covers all areas of everyday life of the 17th century from all cultures, including the arts, speech, food, dress and sciences of the time,” Lawrence said. “It’s about creating the atmosphere of those times, and that’s what I love about it. There’s something romantic about that too.”

Lawrence says that because of the similarities SCA members have with each other, many of them have become friends outside of the group. This is the case with her and Sumandra.

“No matter what our persona is here, we are all still the same person in our regular lives,” she said. “But it’s still fun to get to know what people do on a daily basis.”