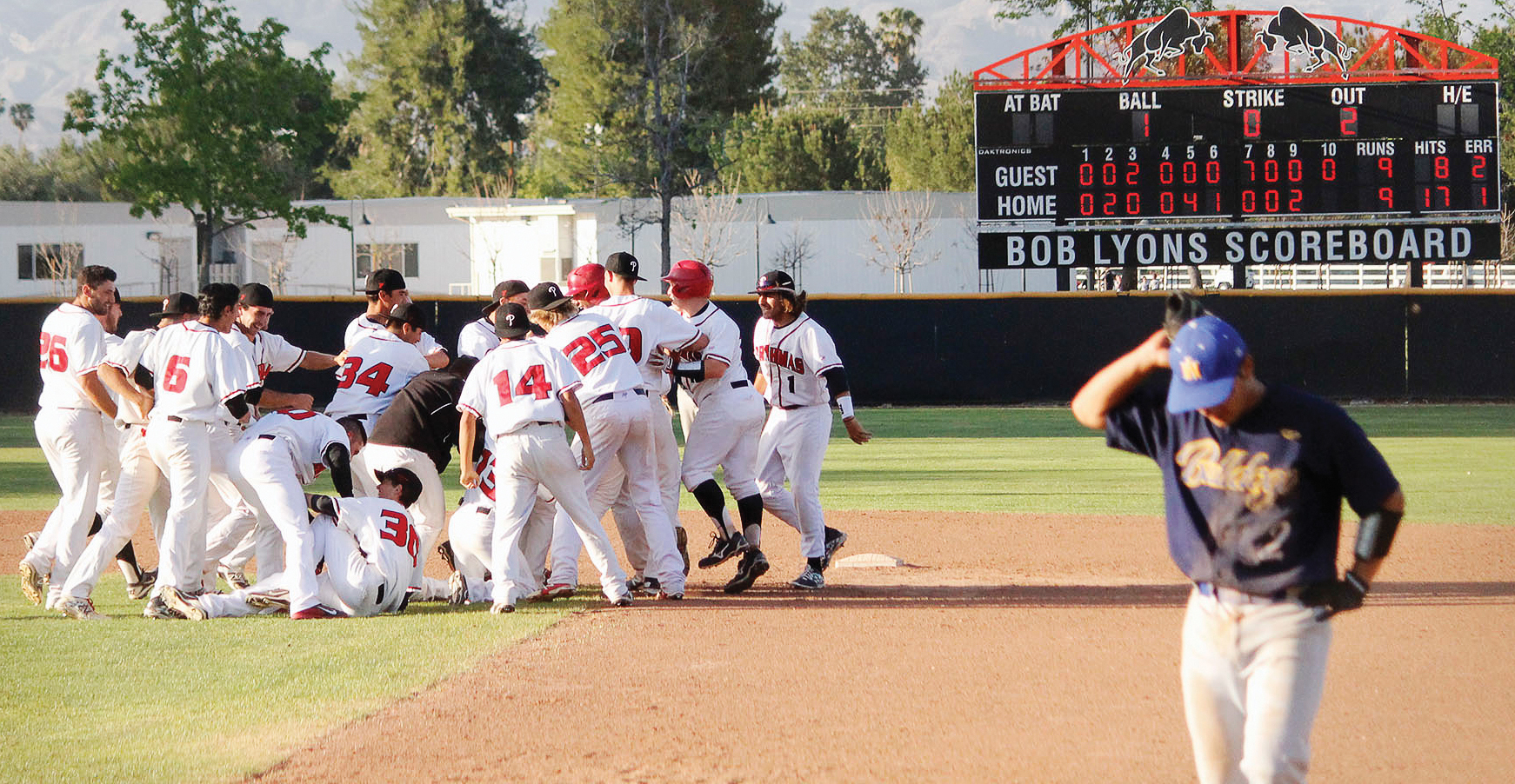 With one swing of the bat, the Brahmas saved a game in the tenth inning to beat the Allan Hancock Bulldogs 10-9 on Tuesday March 18.

“I just tried not to do too much,” Tobias said after his game winning hit. “I just focused in and made it happen.”

The Brahmas got another strong pitching performance from left-handed pitcher Matt McKeever, who pitched six innings, gave up four runs, had six strikeouts and was able to best opposing lefty pitcher Nathan Thompson.

Thompson came into the game with a record of 5-0 with a 0.87 ERA. Yet the Brahmas were able to do damage to him including scoring four runs in the fifth inning to take a 6-2 lead. It was the most runs given up by Thompson all season long.

“The Brahmas hitters did a great job today,” Bulldogs head coach Chris Stevens said. “Pierce also did a great job defensively, made the plays that they needed to make and unfortunately we did not do that today.”

The Brahmas inconsistency in the bullpen reared its ugly head again. After McKeever came out in the seventh inning, giving up two runs, it took two more pitchers to get out of the inning. Pierce right hander Pablo Sanchez gave up four runs and three hits before being taken out, having only recorded one out.

Right hander Brandon Ortega who has been pretty consistent throughout the season, came in and he couldn’t find his rhythm either, giving up one run, one hit, and walking three Hancock batters before getting out of the inning.

“We need to pitch more aggressively,” Pierce head coach John Bushart said. “We were pitching defensively instead of aggressively and we need to change our mindset.

After the seventh inning the Brahmas trailed 9-7 after the eight inning, but managed to score two runs with RBI singles from first baseman Zach Friedman and shortstop Austin Peters in the ninth.  During the ensuing extra innings where Tobias came up with the game winning base hit.

The Brahmas next game will be on Thursday as they will play Allan Hancock this time on the road in Santa Maria where assistant coach Eric Bloom hopes Pierce will sweep the series.

“We’ll enjoy this victory today,” Bloom said. “Get back to practice tomorrow and go play another hard nine innings.”