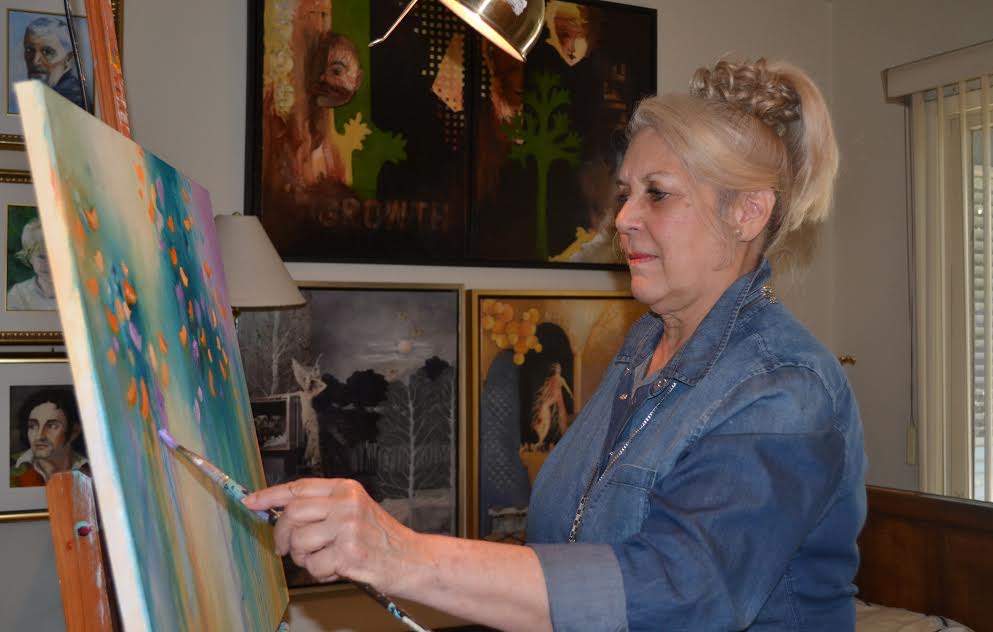 There wasn’t a bare wall in her apartment; paintings of green landscapes, abstract shapes and portraits were hung all around, giving the beige rooms a splash of color.

Karren de Gorricho, an award-winning artist who also happens to be a Pierce College student, designed her apartment which also doubles as her studio.

De Gorricho, 69, is a member of ENCORE, a program at Pierce that offers a variety of noncredit classes for older students, according to their website.

After taking an average of four classes each term since 2010, she says she has refined her abilities to use “mixed media” painting techniques, oils, acrylics and watercolors in her work.

Even though de Gorricho retired from her long career in fashion four years ago, she seeks to expand her painting career while juggling school and a part-time job.

“I’m trying to purely find my own voice,” de Gorricho said. “Now I don’t have to worry about making a living. I just followed this tugging I felt to paint.”

Among the dozens of paintings around her home, de Gorricho pointed out her favorite piece that was hung on one of her dining room walls.

The painting contained different shades of blues and grays covering the majority of the canvas. Toward the right of the painting, a woman dressed in black and white stood with her left leg placed on a chunk of grass and her right leg extended up in the air.

“This painting is named ‘Keep on Dancing’ and the woman’s face is of one of my girlfriends, Natoma,” de Gorricho said. “It is a metaphor for the road or journey through life, on finding joy.”

In order to keep track of all her projects, de Gorricho owns two leather workbooks in which she has logged every single piece she has created. Her work is a mixture of realism, landscaping and her preferred choice, abstract.

“Abstract is like a surprise; it’s a journey filled with happy accidents and you build on those accidents and create the paintings,” de Gorricho said.

Deborah Pitt, a part-time instructor with ENCORE, has been teaching de Gorricho for about two years.

“Karren comes to me for critique and feedback and is very specific on what she needs from me,” Pitt said. “She is very talented and the students here really enjoy working with her.”

Throughout the years, Pitt says she has seen how de Gorricho has learned to allow herself more freedom in her paintings.

“She’s great at drawing and can easily communicate through her paintings what she is trying to show,” Pitt said. “She thinks a lot about color combination and it is easy for her.”

“I went to one of her shows and it was absolutely amazing,” Rolfes said. “Her work was beautiful and I was blown away by it.”

Rolfes said that out of all the pieces in the show, her favorites were the “discovery oriented collages.”

“You look at a painting and you discover a face or something that she put in there and it’s surprising and really interesting because that really takes a lot of skill to do,” Rolfes said.

During the show, which took place at the Creative Arts Center in Burbank last year, de Gorricho won five awards which included “Best of Show” and the “People’s Choice.”

De Gorricho, who is currently working on creating a website to help sell and expose her work, said she has no plans on slowing down.

“I would love to be in a museum someday,” de Gorricho said. “I expect to die with a paintbrush in my hand.”