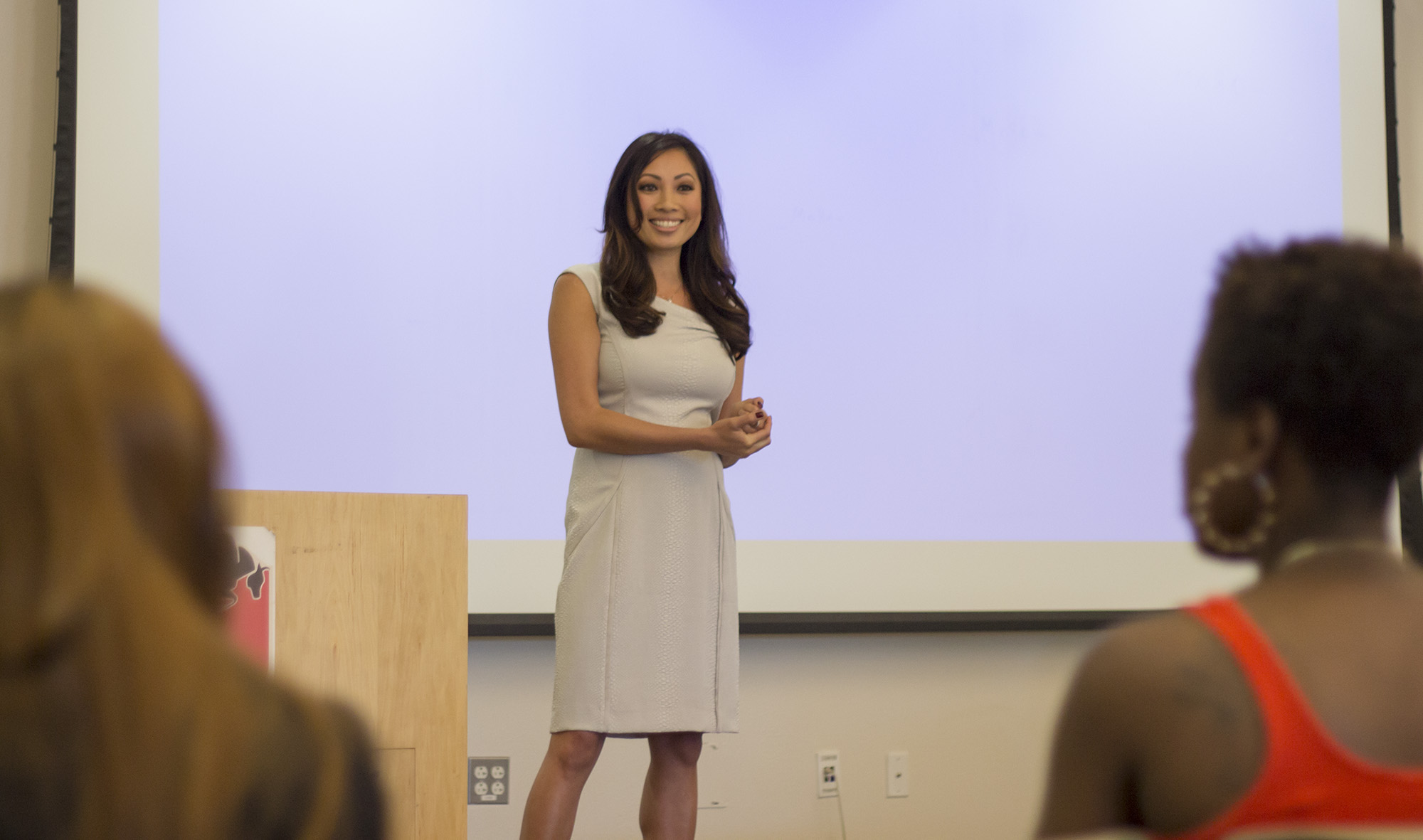 “I wanted to come here today because I really wanted to give you guys some information that could really help you because that’s what helped me when I was in college,” Cheng said. “When speakers would come in, I would keep notes from their lectures.”

“I want to know what I can do to help you,” Cheng said.

To start off the event, Assistant Professor of Journalism Stefanie Frith introduced Cheng to the audience and directed them to tweet questions to Cheng’s personal twitter including #ChengPierce.

“I wish that someone had talked to us [in college] more about the power of networking,” Cheng said. “The best thing that you can learn is how to build a relationship.”

Her main focus in the lecture was to inform students of the importance of networking and creating relationships with potential employers.

“What can you do to help me grow and what can I do to help you,” Cheng said. “It might be as simple as being excited and interested in how the person got to their position.”

She described how students should start building relationships as soon as possible to create life-long connections.

“I would put aside a few hundred dollars every year to meet people for lunch, dinner, coffee, if they could just talk to me on the phone for ten minutes,” Cheng said. “I would email people, I would ask my friends, colleagues, fellow students, ‘Do you know someone who is in this business who can help me, just talk to me for ten minutes.’”

Cheng told the audience how her connections and persistence helped her get every job that she has had as a reporter.

“I honestly liked how Cheng would tell us the key to getting a job is making relationships,” said Samira Zamara, a Pierce student.

Cheng also described her typical day at work, beginning at 3 p.m. and ending at 11 p.m.  She and her team would use most of the day to find stories, track down sources and put together the package for the 10 p.m. show.  If she had to cover a breaking news story, the package would have to be done by the 6 p.m. show.

“I learned a lot about starting at the bottom and working your way up from this lecture,” said Aiman Lawwad, a Pierce student who heard of the event from his broadcasting class.

Cheng’s favorite stories to cover are breaking news and she has received the nickname “Kim Reaper” at KTLA.

“It’s really exciting,” Cheng said. “You don’t know what you’re going to do and you feel like you’re camping everyday. You have to have an extra bag with clothes, fire clothes, rain clothes, power bars, things like that.”

She began in the number 142 market in the United States, Palm Springs. Her second market was number 12, Phoenix, Arizona, and now she works in Los Angeles, the number two market.

She said that her next goals are to focus on her personal life after working for six years to reach her position at KTLA.

“I want to have a baby and get married,” Cheng said.

To ask Cheng further questions about her work as a reporter or advice to get into the journalism field, tweet the question to @KimberlyChengTV and use the hashtag #ChengPierce.