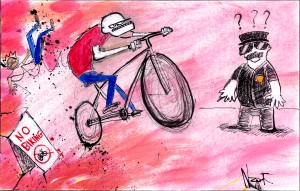 The law regarding no bicycling or skateboarding on campus was made not only as a safety measure for students, but as a way to keep Pierce College from being liable in case an accident were to happen. However, since its implementation, some students still break the law by continuing to ride inside the campus.

Citing these apparent law breakers has not stopped people from riding within the grounds of the campus and it probably never will. Instead of ticketing those who break the law, why not make the campus more bicycle and skateboard friendly?

In the past couple of years, the city of Los Angeles as well as other cities in the county have made major strides for bicyclists. They have accommodated the trend for this alternative mode of transportation by adding more bike lanes on the road and having events such as CicLAvia, where large portions of major surface streets are closed off to cars while bikes, skateboards and pedestrians are free to navigate these car-less streets.

It doesn’t take much to make Pierce rider friendly and we have the means and space to do so.

The Mall is wide enough to make bike and skateboard lanes to either side, leaving the middle for pedestrians to walk through. It isn’t an absurd idea to implement because anyone can see that the bulk of pedestrian traffic on the Mall keeps to the middle anyway.

Bike and skateboard lanes can also be implemented along Brahma Drive, which starts from Winnetka, flows up the hill and goes through to the Mason entrance of the campus.

Making a rider lane through that corridor would cut riders’ need to snake through the parking lots, avoiding potential accidents between a rider and a car backing out of a space.

To keep the status quo, the sheriffs would have to aggressively enforce the law by citing everyone who breaks it, but having a sheriff deputy or cadet stationed on the Mall throughout the entire day is a waste of resources and who wants to be a hall monitor on a college campus?

This rider-friendly plan of making a dedicated lane on the Mall that connects to a lane through Brahma Drive makes sense and would be beneficial for everyone.