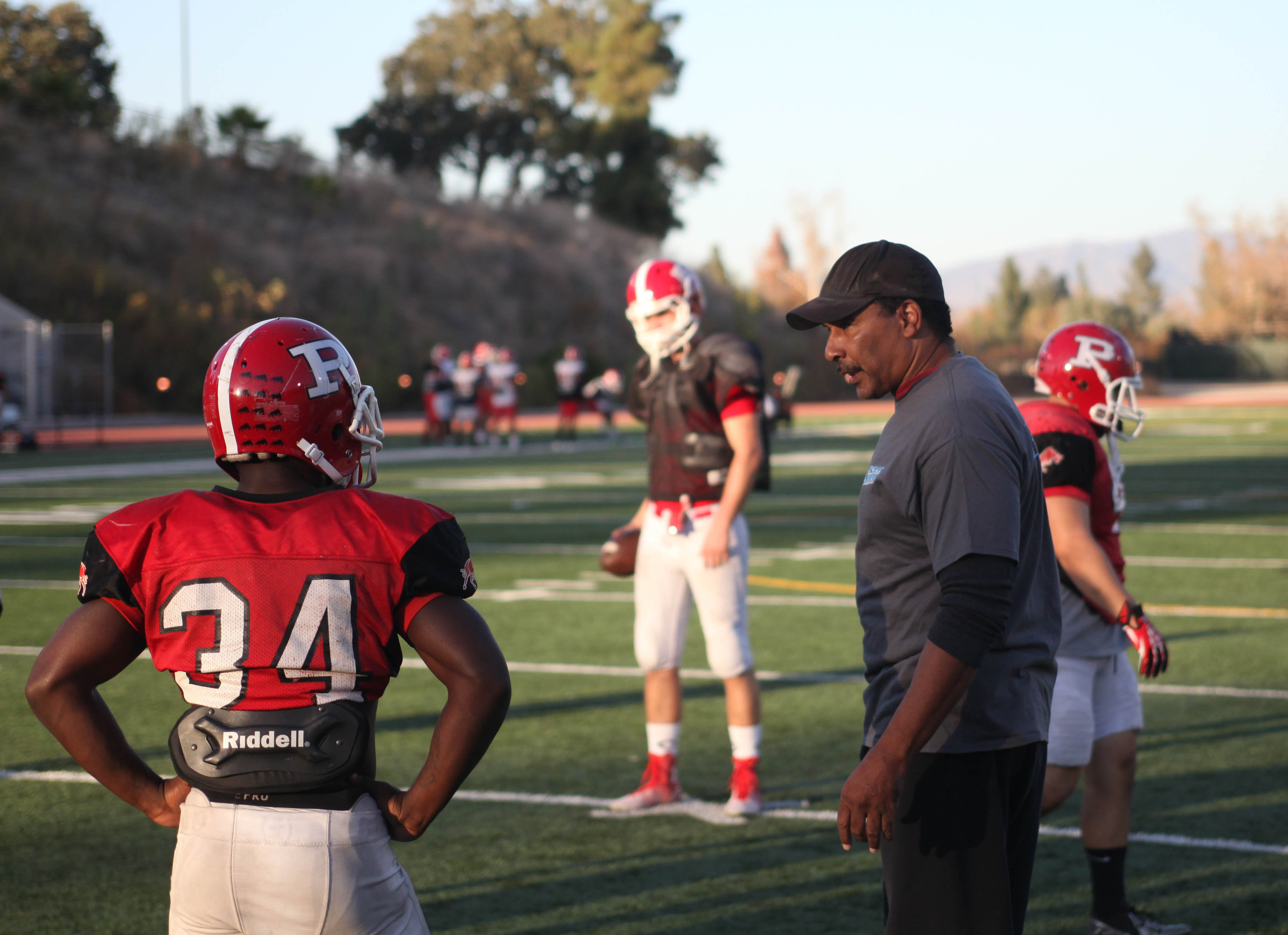 It was just another day at the park for a group of middle schoolers playing football in San Fernando. But with one throw, the ball sailed and caught the attention of a man in the parking lot.

The man in the parking lot yelled at the group, “Who threw that football?” The group pointed to the kid who threw the ball, who was afraid and thought he was in trouble.

That kid turned out to be future professional football player DeWayne Jett.

“He was the guy who told me I should be playing in organized sports,” said Jett, who is now Pierce College’s quarterbacks and assistant head coach.

Growing up in the Valley

Jett grew up in the San Fernando Valley, and has played football from the middle of the Pacific Ocean in college and three different professional leagues,  including in Canada.

But he might have been a baseball player had his father not died when he was 8 years old.

Jett’s father brought him to Dodger Stadium in 1962, which turned out to be Sandy Koufax’s first no-hitter. The 4-year-old Jett was in awe of the stadium.

I said ‘One day I’m going to be a professional baseball player.’” — DeWayne Jett

“I looked at this grass, and I couldn’t believe how beautiful that was,” Jett said. “I said ‘One day I’m going to be a professional baseball player.’”

His father was “a big baseball guy.” He might have persuaded Jett to choose the diamond as his career path instead of the gridiron.

“Maybe this is the influence I would have had, had my father been alive,” Jett said.

Jett was a pitcher and catcher through the 11th grade, which is when he made the decision to drop baseball and play football full-time, even though his mother didn’t want him to play a contact sport.

People said he was a better baseball player than football player. But he chose football because he thought it was exciting, and baseball was boring.

Jett first played football when he was 6 years old for the Valley Youth Conference Chargers. In those days the neighborhood kids would choose him first in pickup games because he could run, but he didn’t realize why they chose him.

“I was scared to death,” Jett said. “So I just ran and made sure no one would hit me.”

Jett ran well, and had the natural ability to catch the ball. But his favorite position was quarterback.

“I came up in the ’70s, and there was no such thing as black quarterbacks in those days,” Jett said. “I found out all the wrong ways. But I had the ability to catch the ball, and I had a lot of speed. They just told me I was a better wide receiver. That was something you had to understand later in life.”

In high school he won back-to-back L.A. City championships as a wide receiver for San Fernando. Those teams had at least 10 players who went to Division I colleges, six who played in the NFL, and one, Charles White, who won the Heisman Trophy with the University of Southern California.

Jett considered USC even though people around him advised against it. The Trojans didn’t throw the ball much back then. The University of Hawaii did, and coach Rick Blangiardi took him and his mother to dinner.

“He worked more on her than he worked on me, which was pretty smart of him,” Jett said. “By the end of the dinner, she leaned over and said, ‘You’re going to the University of Hawaii, right?’”

By the end of the dinner, she leaned over and said, ‘You’re going to the University of Hawaii, right?’” — DeWayne Jett

When Jett went to Hawaii  to visit the school in person, Blangiardi picked him up from Honolulu International Airport and took him directly to Aloha Stadium. Blangiardi sat Jett down on the 30-yard line of the 50,000 seat stadium told him stories of grandeur.

“He said, ‘Look around. You’re going to do great things in this stadium,’” Jett said. “That was pretty impressive, to sit there, and look around and imagine yourself scoring touchdowns with a crowd of people cheering you on. I was sold.”

In 1980 the Detroit Lions selected him in the 9th round of the NFL Draft.

With great expectations, the majority of Jett’s time with Detroit was spent on injured reserve. He tore his quadriceps muscle his rookie season, and broke a hand the next year.

In 1982 he landed with the Baltimore Colts. That was the year of the player’s strike.

Jett played in two exhibition games during the strike that were put on by the NFL Players Association and Ted Turner who started cable networks such as TBS and CNN. The cable-television magnate stood on a bench after the game to hand out checks to the players, Jett said.

When the exhibition games ended, the NFL was still on strike, and nobody else was handing out checks. With no football work on the horizon, Jett applied to the L.A. Fire Department. He passed the test and got hired, but didn’t see any action as a firefighter because he resigned the day the strike ended.

Jett went back to football, this time with the St. Louis Cardinals. They released him, and in 1983 he ended up with the L.A. Raiders. But injury claimed another season from Jett.

It’s a championship. What more is there to say.” — Dewayne Jett

“Again, injured reserve, the whole bit. I played a very minimal amount of time,” Jett said. “I broke a finger, and they put me on conditional IR.”

That year the Raiders won the Super Bowl, and Jett got a ring.

In the spring of 1984 Jett was in training camp with the USFL’s Houston Gamblers and L.A. Express, but didn’t make either team’s final roster. Later that year he signed with the CFL’s Hamilton Tiger Cats.

In 1985, Jett went back to the Raiders, but was released during training camp.

Former Green Bay Packers running back Elijah Pitts, Hamilton’s offensive coordinator in 1984, took a coaching job with the Buffalo Bills in 1985. Pitts asked Jett to join him in Buffalo that year, but Jett declined.

“I’m done,” Jett said. “I was starting a company, and I had kids and I didn’t want to go through that back-and-forth thing.”

The injuries had taken their toll on Jett, and left him “disappointed” in his career. That changed in 2002 when former Dallas Cowboys and Denver Broncos wide receiver Butch Johnson said something to Jett’s daughter at a seven-on-seven football tournament in Balboa Park.

“He had his Super Bowl ring on,” Jett said. “And my daughter said to him, ‘My father has a ring like that.’ He said ‘Your father’s very lucky. He’s one of only about 1,000 people in the world who has one of these.’”

From player to coach

Jett’s playing career was over, but his college coaching career didn’t begin until he met two Pierce football players at LA Fitness in Woodland Hills in August, 2014.

It was well Jett was giving an autograph out to a fan that Pierce defensive linemen Stephan Rawls and Harneet Gill approached the former player and started to talk football.

Gill and Rawls invited Jett to some of the summer practices after their discussion with Pierce still in need of more coaches.

“He said ‘maybe,’” Gill said. “But he actually showed up that afternoon, and ever since then it kind of clicked.”

Jett then signed on as quarterbacks coach and assistant head coach. His professional playing experience quickly translated to coaching at the junior college level.

He has wisdom that I don’t see in very many people.” — Efrain Martinez

“The players gravitate towards him,” head coach Efrain Martinez said. “If there’s a problem the players will ask him for advice, and he always has solutions. He has wisdom that I don’t see in very many people.”

“He knows his stuff,” Smith said. “He’s been in the game for 50-something years, so he knows what he’s doing. He knows how to coach people up.”

“He’s a very energetic guy, and then when something exciting happens it’s a burst of joy,” Sainterling said. “It’s very unpredictable, but it’s a good unpredictable.”

As a young man playing football in the park with his friends, Jett never thought the game his mother didn’t want him to play would take from San Fernando, to Hawaii, to three professional football leagues and eventually Pierce.

“I try to teach them the next level,” Jett said. “They’re at this level, wherever they’re at, and that’s up to me to figure out and determine, to bring them into the next fold of football.”