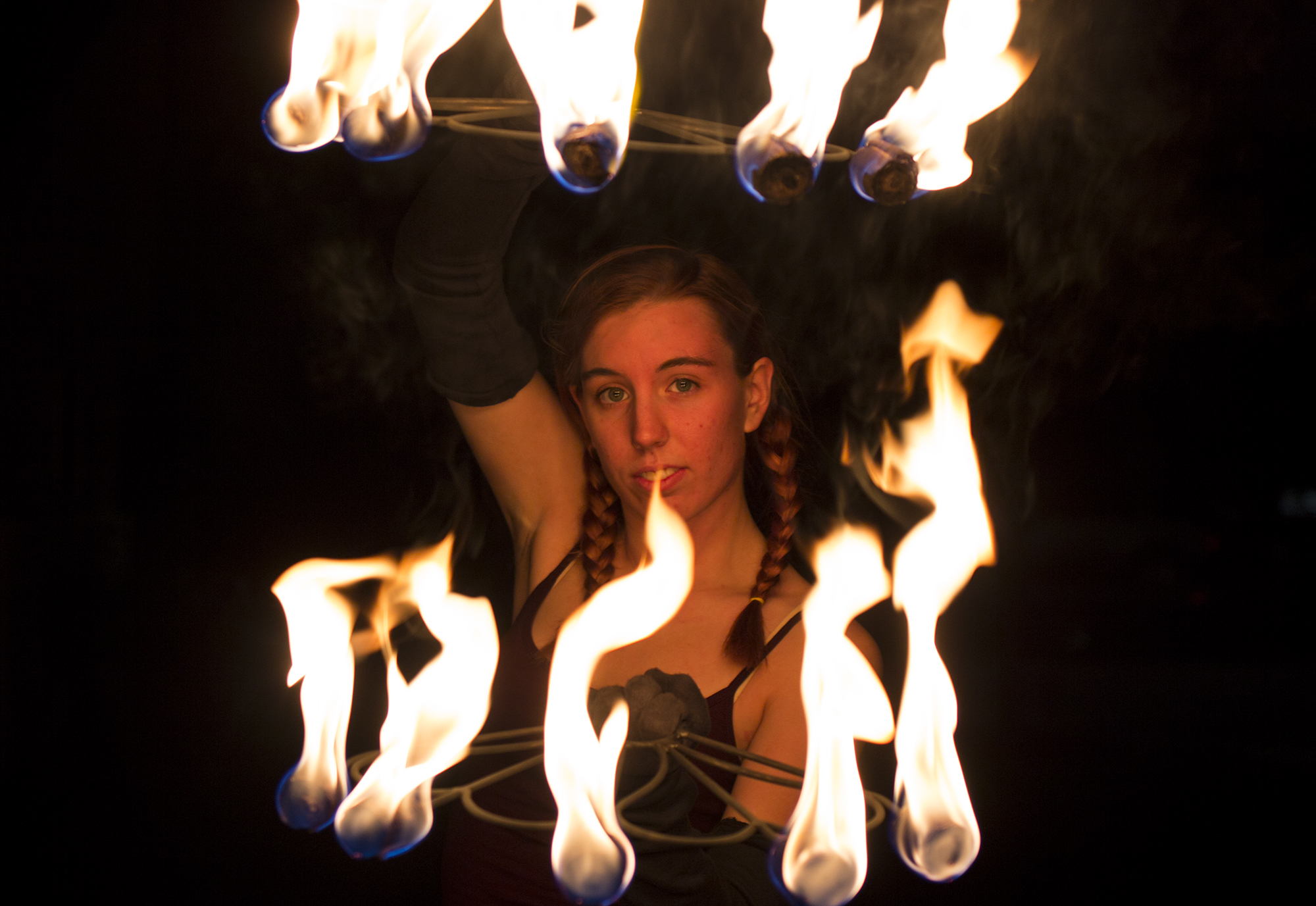 While she gripped the metal fans with each at hand, she carefully lit the wicks as the flames ignited in a complete fury, then gracefully danced at night with the flames at a smooth and steady pace.

Sydney Brushwood, a 21-year-old psychology major is a Pierce College student that likes to “fire spin.”

Brushwood graduated from Chatsworth High School in 2011 and has attended Pierce for the past two years. Born and raised in the San Fernando Valley she always found circus acts interesting and taught herself how to juggle at a young age.

“Well I’ve always liked circus things that’s why I wanted to juggle,” Brushwood said. “I thought this was circus-y and it’s just awesome. Everything is better on fire.”

Introduced to “fire spinning” two years ago by one of her friends, Brushwood already knew how to juggle and believed it would come easy to her.

“You should do this, because you can juggle and it’ll be on fire,” Brushwood said.

Brushwood admitted she was scared the first time she “burned,” but said it wasn’t so bad after they gave her a sword to swing around until she felt comfortable.

New burners usually start off using a sword so they can get used to holding the item while it burns and then move onto more intricate items like the diablo, staff or fans.

Since Brushwood always liked circus themed acts fire spinning quickly become a new hobby. Though her current choice of instrument is the tech fan she, shared how she wants to learn how to “double-staff” this coming year.

“I’m actually asking for a double staff for Christmas, so I’m going to use those for now. Maybe traditional fans later,” Brushwood said.

Since she started fire-spinning, Brushwood admitted to igniting herself about three times. She protects herself from injuries by wearing clothes that are about 60 percent cotton, fire and heat-resistant gloves, which makes the fire easier to brush off.

“I guess technically I’ve caught myself on fire three times. I guess I forgot it happened last Saturday at my aunt’s house,” Brushwood said. “The first time, I was wearing pajama pants which was my fault. It was really baggy It probably wasn’t the best idea and caught my butt on fire.”

Josh Badger, has known Brushwood for four years they been dating for the last two years. He shared how they burn together, described Brushwood as shy, goofy and really girly.

“She’s really fun to hang around with and easy to talk to like even before we started dating we’d talk all the time like over text, Facebook just about pretty much anything,” Badger said.

Badger is also her fire safety and shared how he carefully watches Brushwood while she spins. In the event she lights herself on fire, he can use their fire and heat-resistant blanket to put it out.

She also makes sure to always have her hair up and out of the way in order to prevent it from fire.

“I always put my hair back, I think I have. I think I’ve singed it once or twice. I don’t know, you can smell it sometimes. Like when you’re done,” Brushwood said. “It smells like burning hair, but you’re not sure but never significant enough to notice. But I did catch my hair on fire the second time I think.”

Overall Brushwood enjoys fire-spinning but hopes to be a psychology professor, after taking a class at Pierce with Jennifer Moses. From the few times she’s taken Professor Moses` classes, she’s noticed on things about or understood before.

“The class was really fun even though it was the hardest class I have ever taken. She’s really goofy and first of all she makes it really interesting and really passionate and really does put herself in the subject she get really excited about it, and we are all like, ‘Dude it isn’t that serious,’ but she makes it seem great,” Brushwood said. “I want to teach other people so they can have that little light build, light up in their head.”

In her free time she enjoys going to anime expositions with her friends and collecting stuffed animals. She currently has over 350 dolls. As a child her mom made get rid of her stuffed animals every year, and she would contemplate on which she would have to let go of.

“She would say,’Get rid of them,’ and I would say,’No they’re mine. They’re my babies. I can’t let them go,’” Brushwood said. “She’d like, make me get rid of a couple every year, and I’d be like going through all of them trying to figure out which one I’d let go I felt like I was abandoning them.”

One of Brushwood’s close friends shared how they have known each other for the past 10 years. She enjoys Brushwood’s outgoing personality and her willingness to try new things. Brushwood tries to take Angel out of her comfort zone by burning with the fans.

“It’s amazing, she has convinced me to try it. It was really fun and exciting,” Angel said.