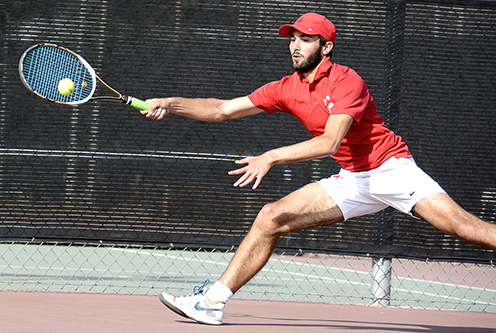 The Pierce College tennis team continued its struggles on the court and lost its fifth game of the season at home against Ventura College on Thursday, Feb. 26.

Pierce was defeated 8-1 with the only support for the Brahmas coming from Manish Kumar, who won the lone match.

It was a battle between Kumar and Ventura’s Corey Karen. Kumar was able to overcome and win the match in three sets.

Kumar was effective in trying to tire out Karen and won the match 5-3.

Pierce head coach Rajeev Datt explained that Kumar used a tactical approach that did not involve overcommitting to the attack.

“For this set, it’s not about velocity or defensive with power, it’s about the spin, depth and placement of the ball,” Datt said.

Karen’s patience was tested as he eventually caught on to Kumar’s strategy after the first set and built momentum in the following rallies.

Karen remained unrattled and responded with drop shots that helped him win the second set 6-5.

“Manish has had a good strategy for the most part and Karen has figured it out a little bit, just in time. It’s been a good battle. He’s being a little more aggressive,” said Ventura head coach Nelson Emery.

Due to time constraints, Kumar’s last singles set had to be won by a tie-breaking score of 10 points.

Kumar got off to an early jump and never looked back to win the final set.

“I feel exhausted, but the other guy [Karen] put up a good fight, so congratulations to him,” Kumar said.

The Brahmas fell to an overall record of 1-5.

In its next match, Pierce will go on the road and face El Camino College on Tuesday, March 3, at 2 p.m.