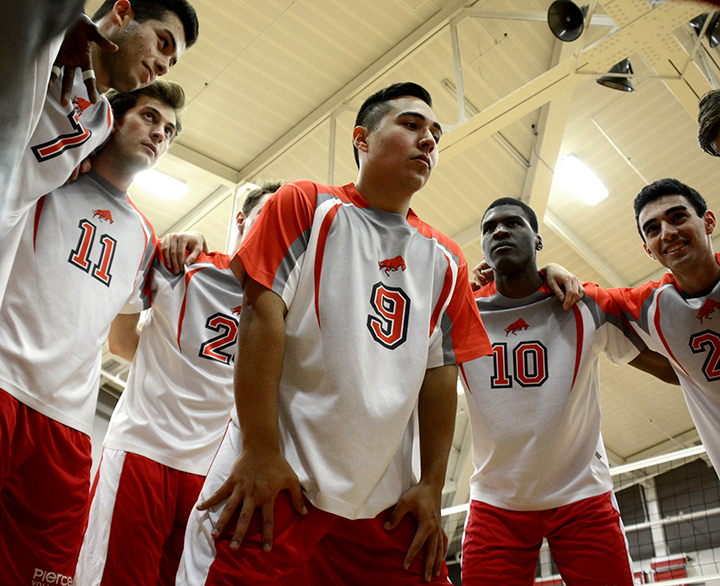 The Pierce College men’s volleyball team started out on fire, but that fire fizzled and the Brahmas couldn’t secure the win against Santa Barbara City College on Friday, Feb. 27 at home.

“I was really proud of the guys, and the fact that we came ready and took care of business in that first set,” said head coach Lance Walker.

The Brahmas and the Vaqueros battled it out in the second set, with sophomore Corey Pitt getting a kill against a triple block. After being tied at 24, the Vaqueros went on to win the set in extra time.

“We had opportunities that we could have capitalized on that we kind of let go,” Walker said. “It’s a little bit deflating when it gets into extra points, and we lost a little of our luster.”

There was a change in momentum by the third set. Walker called a timeout to “clean up the blood” with the Brahmas being down 21-14.

Santa Barbara had its own set of obstacles to overcome in order to win the game, and its head coach Matt Jones said his team did a good job of doing that.

“We try to be a balanced team, and I think that was a good example of the team swallowing their egos,” Jones said. “This was one of our better blocking matches, but we didn’t start off blocking well.”

Walker is optimistic that his team will find a way to remember what makes them great.

“The most important game is the game that you’re playing,” said Walker. “We’re going to hone in on what makes us great.”

Pierce, now 3-5 on the season, will play Moorpark College at home on Wednesday, March 4 at 6 p.m.