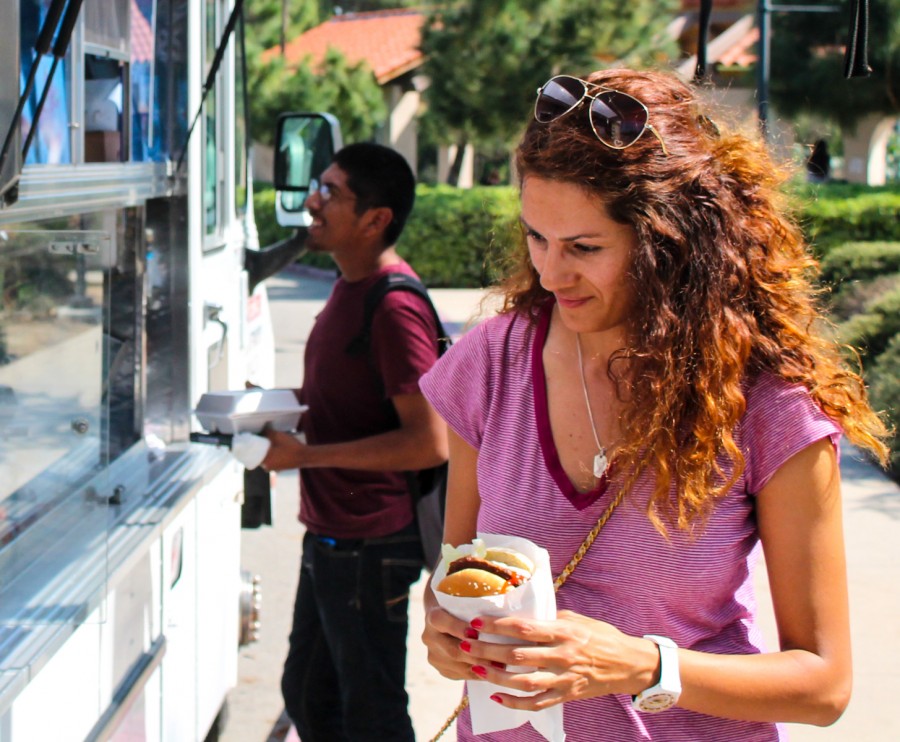 After the closure last semester of Lovebird’s Cafe left the cafeteria vacant, on-campus food options at Pierce College are limited to three food trucks and the Freudian Sip.

The choice in fare is slimmest on Fridays, when the only choices are the Hot Coffee food truck and the Freudian Sip. According to Freudian Sip Supervisor Shant Varozian, the inventory is largely sold out by the end of the week.

“We get our food early on in the week around Tuesday or Wednesday. By the time Friday rolls around, the number of students on campus is much smaller,” Varozian said.

In addition, the Freudian Sip maintains shorter hours of operation on Fridays. It is open from 7 a.m. to 9 p.m. Monday through Thursday, but on Fridays those hours are 7:30 a.m to 2:00 p.m.

Minerva Castellon, owner of the Hot Coffee Catering food truck, said her truck remains on campus on Fridays despite the lack of students.

“We don’t get much business. It’s mostly for the service,” Castellon said.

“We don’t have all the food we usually have on Fridays. We do not serve breakfast. We mostly sell fries and hamburgers,” Castellon said.

At a Pierce College Council meeting last month, Vice President of Administrative Services Rolf Schleicher announced a plan to possibly move the Freudian Sip into the unused cafeteria. The total vacancy of the cafeteria has prompted offers from other vendors looking to fill in the empty space.

Ofir Bass, owner of the Falafelicious Catering food truck on campus, has wanted to move into the cafeteria for several months now.

“I would love to move in there. I think it would be a great opportunity for me and as well as for the students to have something else,” Bass said. “Right now, there are not many food options on campus.”

Bass expressed interest in the cafeteria after seeing the wide selection of food it could provide.

“I looked around the cafeteria and I noticed that there were many types of stations there. I saw spaces for pizza, Asian and Mexican food,” Bass said. “There was also a space where I could see myself selling food as well. Whatever the case is, I would love to get involved.”

Despite numerous attempts, Bass continues to wait for a response.

“The trouble is that it seems that they are not ready to make a decision,” Bass said. “I have pretty much sent the deed to everyone who is involved in making a decision and I’m still waiting.”

LACCD Chancellor Francisco Rodriguez is aware of the lack of food throughout the district and assures that change is underway.

“What we are doing now is contacting each individual college and having them create focus groups with the students in order to better understand their needs. It is also a way for them to have their voices heard,” Rodriguez said.

Rodriguez says that the focus groups should begin between the months of April and May this year. In addition, Rodriguez explains how the diversity of students on each campus may require more than just one solution in terms of food options.

“History and culture are different at every college. The food that we bring into these schools should reflect the different needs of the students,” Rodriguez said.

“I don’t even count on eating food on campus. It’s highly inconvenient that I end up having to leave,” said Shivarjoo.

Shivarjoo said he believes the cafeteria could benefit students by providing them with healthier food options.

“I don’t think the Freudian Sip or the food trucks are really getting the job done in terms of health,” Shivarjoo said. “It would be nice to have a cafeteria where we can get decent food.”

“Regardless of what these changes may be for each individual campus, our outcome is to provide reliable, healthy, and affordable food services,” Rodriguez said.

Rodriguez will visit Pierce on Thursday, and students are encouraged to attend and ask the chancellor any questions they may have.