James Stewart, Seth Perlstein" />
Skip to content
You are Here 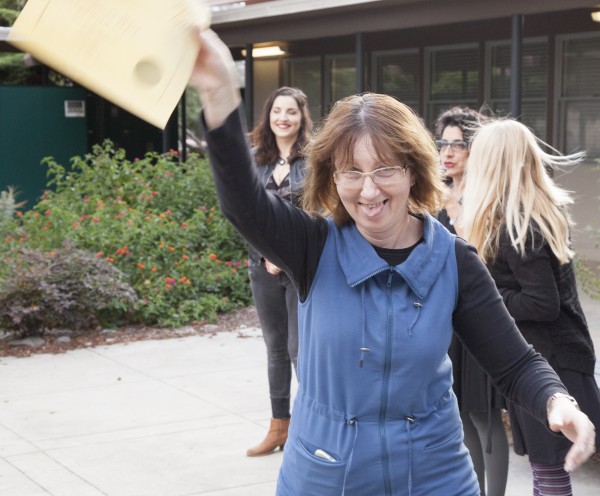 Art student Lyudmila Oritz won top honors at Pierce College’s sixth annual Student Art Show for a political cartoon about the conflict in Ukraine. But she was stripped of the award when Monika Del Bosque, instructor of arts, was told by Oritz’ professor that a student was accused of plagiarizing the cartoon.

The ASO and Foundation-sponsored show opened with an awards ceremony and reception May 7 in ART 3301.

“I feel bad for the public who came and was deceived,” Del Bosque said.

The cartoon Oritz used to win Best in Show appears identical to a piece created by Dave Granlund. It depicted a Ukrainian bus being pulled in two directions by tow trucks, one labeled as from Russia and the other marked as from the European Union.

“It’s one thing if a student commits plagiarism in a class,” Del Bosque said. “But then to submit a piece to a show for a competition, that’s another layer of dishonesty. That’s the part that to me is really hard.”

“Plagiarism is never OK anywhere. Coming from the art world, and being an artist myself, it takes a lot of guts to claim someone else’s work as your own. There’s absolutely no excuse ever.”

Del Bosque disqualified Oritz and removed the plagiarized piece from the gallery as soon as she found out about it, she said.

“As soon as we figured that out it was pretty clear,” Stone said. “It won under the pretense that it was original work.”

The other student’s art on display was original work, which ranged from paintings to stone sculptures.

Several of the pieces expressed the student’s’ perceptions on world events, and provided an opportunity to test their technical competency with a new artistic skill set.

Perris Valentine’s painting reflected his frustration with the displacement and hopelessness of people who live in Brazil’s ghettos called favelas. The people there have experienced gentrification because of the upcoming 2016 Brazil Olympics, according to Valentine.

Brazil’s Olympic Committee has approved the building of hotels and restaurants in place of favelas, which has left the people in those communities “homeless and helpless,” Valentine said.

“The kid featured in my piece is looking hopelessly at his favela neighborhood being torn down and replaced with hotels and restaurants, but there’s nothing he feels he can do about it, nor is there anywhere for him to go,” Valentine said.

Other students were challenged by their instructors to push beyond their comfort zones and apply their talents to a new art medium. Yarizbet Jaimes’ exhibit was his first foray into stone sculptures.

“I usually stick to clay,” Jaimes said. “I was challenged to push my skills and express my skills differently and I enjoyed and appreciate what I learned in the process.”

Richard Villalobos, who won an honorable mention, said he spent “22 hours painting, designing and thumb nailing” his exhibit before submitting it.

Gallery assistant Francisco Valdez said this year’s show was a “nice mixture of everything.”

“There are 3D designs, 2D designs, oil paintings, sketches and mixed media art,” Valdez said. “The variety highlights the spectrum of Pierce students’ talent and the training Pierce has to offer.”

The annual Student Art Show will continue through May 26 in the Art Gallery.