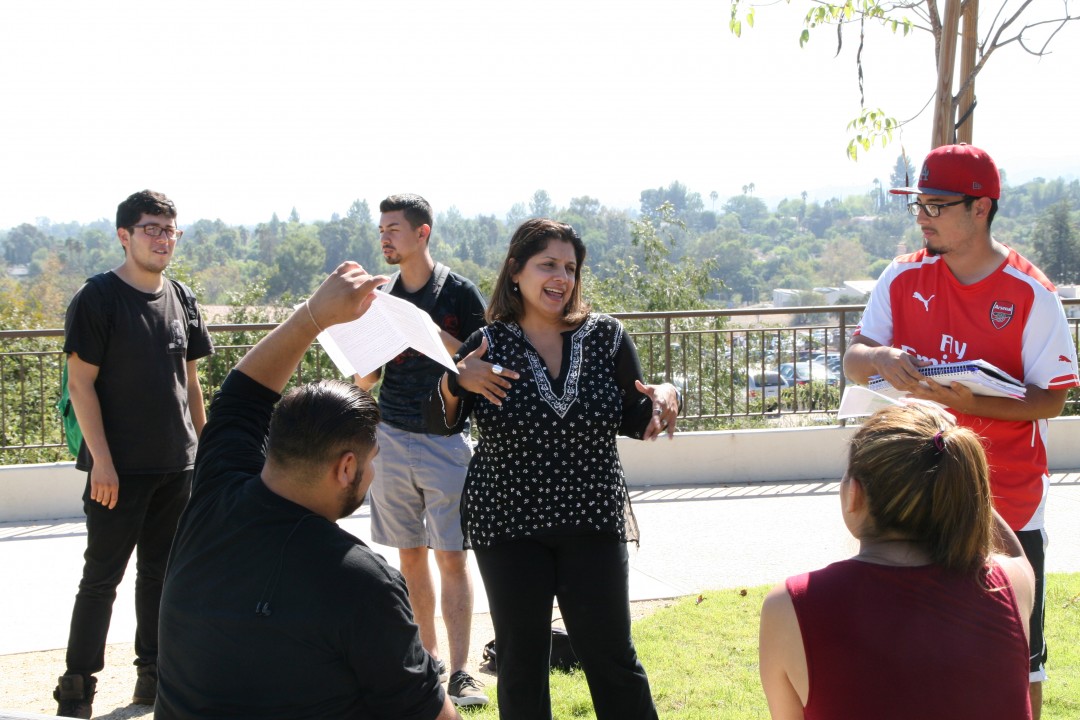 She will also be teaching various courses such as “Introduction to Theatre” and “Voice Articulation for the Theater”.

Vaaz-Chamarbagwala began to incorporate theatre into her life after she left Bombay, India at the age of 18, and began attending Smith College, a private women’s liberal arts college in Northampton, Massachusetts.

“That was a shock to be with all women. It was so different and so cold. I’d come from the tropical heat to experiencing my first fall and winter with ice and snow, with no clothes to really work with the weather,” Vaaz-Chamarbagwala said.

Although she was a political science major, acting and performing was always a part of her life.

During her undergraduate program, she performed in at most two plays a semester. Soon she was accepted to a new acting program at Columbia University, and her parents decided to let her stay in America.

“I made a deal with them that they’d let me stay in America if I would try to work as a director instead of being an actress. So I did that for a year after college, and then I got into Columbia University for their new acting program,” Vaaz-Chamarbagwala said.

Sleepless nights came alongside new knowledge about theater in the Big Apple. She was surrounded by many artists who were teaching for the first time. This led to her attraction toward stage acting and soon, TV began to happen.

“I did a show with Sandra Oh, and she just blew me away with her amazing work ethic. Also Maggie Gyllenhaal. She was very focused and rigorous while doing her work, and kept the drama on stage,” Vaaz-Chamarbagwala said.

Having a professor with a background in television, who has worked side by side with professional actors, is entertaining and inspiring, Sonya Morris said.

“She has a good voice, and she’s very informative so it makes learning so easy. She helps me be myself,” said Morris.

Michael Gend, Department Chair of Performing Arts, is happy to have someone who is “well connected” in her field and who can help students network for their careers in theater.

“In observing the rehearsals for our play production class, [I see that] she mentors her students more than she teaches them, which I think is very important in art,” Gend said. “You want your students to have a level of admiration and respect towards your own craft so it feels more comfortable to work.”

Gend and Vaaz-Chamarbagwala’s paths have crossed before. They know the same people within their industry, such as designers and actors, but they had actually never met before working together at Pierce.

“It’s interesting how many times our lives have intersected and that life put us here at the same time,” Gend said.

So far, Pierce College has been a “great fit” for Vaaz-Chamarbagwala. She loves the supportive environment and she can see the way her students are “blossoming and opening up.” She loves her students, and enjoys how they are “bringing their experiences into the room with them.”

A class that requires one to perform in front of an audience may be a challenge for those who have never stepped onto a stage before, but Vaaz-Chamarbagwala makes sure to advise her students that this class will be a safe journey towards their future.

“My acting classes are just so kind to each other,” she said. “I always tell them that we want to create the safest environment where we can take risks in our work.”

Vaaz-Chamarbagwala is currently directing the department’s first play of the season, Vanya and Sonia and Masha and Spike. Their team is filled with students who are working alongside professionals, including the design team.

“We have the big structure of our set ready. The props are ready,” Vaaz-Chamarbagwala said. “I have professional actors working side by side with students. I think that’s a huge thing for students.”

Vaaz-Chamarbagwala said she hopes that she can work closely with the acting program and see how she can help it grow even more than it already has. Using her background and her industry connections, she wants to help her students connect to real jobs and careers in the world of theater, television, and film.

“I want to help them grow their passion for it, along with their skills and business acumen,” Vaaz-Chamarbagwala said.