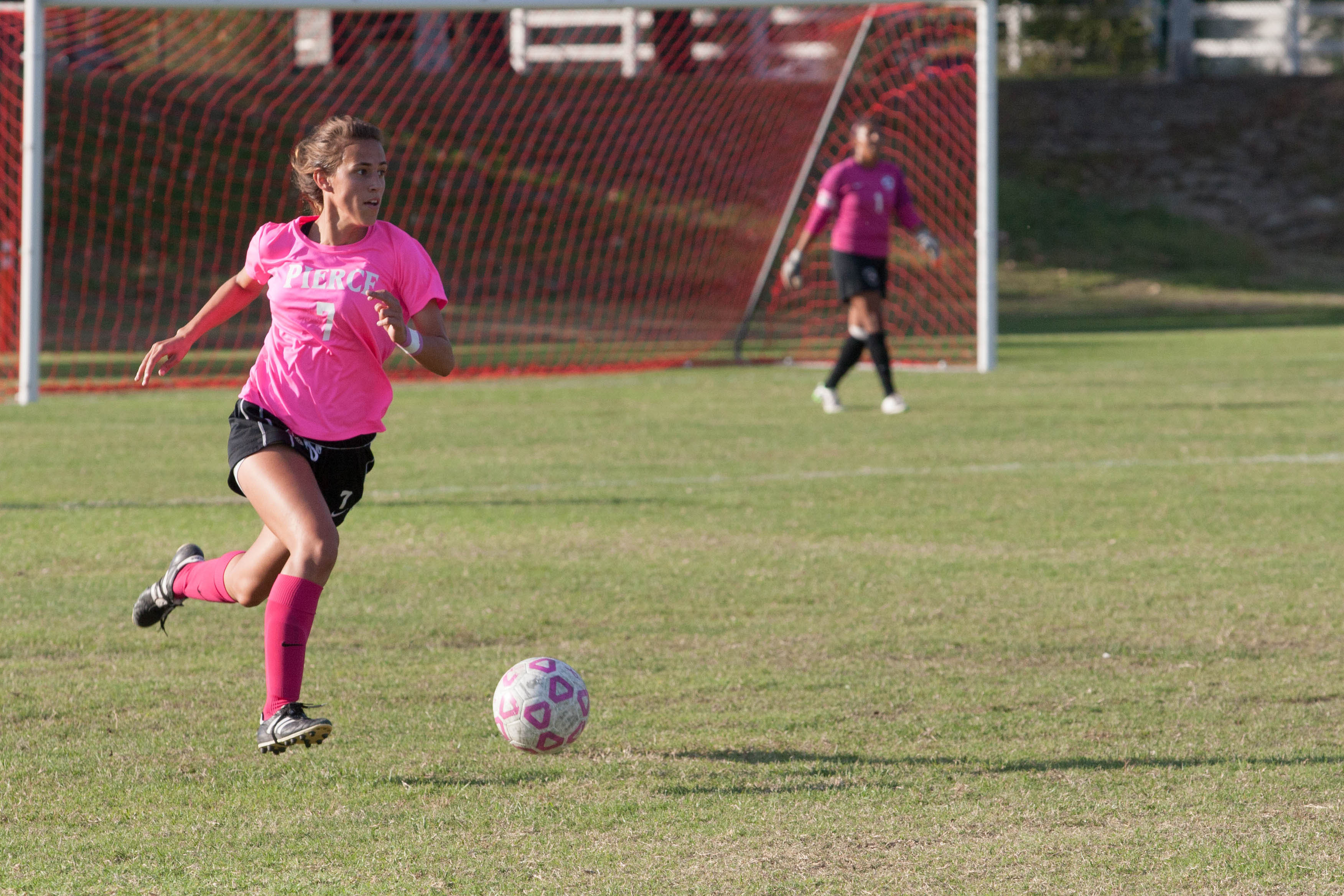 Defense was the key for the Brahmas as they held the Condors to a few shots and maintained possession the majority of the game.

Pierce College took the win against Oxnard College at home on Friday, Oct. 23. The Brahmas scored the only goal of the game giving the Brahmas a 1-0 victory. The Brahmas wore pink to raise breast cancer awareness.

The Brahmas wasted no time and applied pressure from the beginning. Angela Verduzco had the first clear shot to take the lead in the game for the Brahmas, but her shot hit the top woodwork and went out of bounds.

The game slowed down as the players got adjusted to one another’s play. It began to pick up as both teams got physical and resulted in Makayla Nichols injuring her shoulder in a foul. She spent sometime off the field but quickly recovered and rejoined the game. One of Oxnard’s midfielders had a head injury and was carried off the field and did not return to the game.

Marissa Albano had her header blocked as the Brahmas had another opportunity to take the lead in the first half, as the persistent offense continued to attack.

The first half ended with a 0-0 draw, with several opportunities for Pierce and lots of physical play from both teams.

To start the second half, the Brahmas came out strong again and was able to have more possession of the ball.

Jeanelly Chavez served as the game changer, scoring the only goal of the game in the 50th  minute giving the Brahmas the lead.

“To be honest, I took the first touch when the ball came to me and I saw the goalie came out, so I took the chance,” Chavez said. “It ended up going over a player of theirs and so it went in. I guess it was just luck.”

Chavez did not do it alone as Abigail Chavez made the pass to get Jeanelly the shot resulting in the goal.

The Chavez chemistry is not something new and head coach Adolfo Perez hopes that there is more to come.

“It’s the second or third time it happens. They’re getting to know each other,” Perez said.

The team had some struggles during the game even though the team came out on top.

“We’re a team where it is hard for us to score goals. We always have so many chances. Off the field we’re so talkative. On the field there’s something that gets to us and we’re so quiet and we don’t talk to each other,” Chavez said.

The game ended 1-0 and although this was a win for the Pierce College Brahmas, it was described by Perez as “frustrating”. Executing goals is their biggest concern.

“This is one of the hardest things for this team. We’re having a hard time being consistent. We have an amazing team, and we have amazing players but we’re not consistent,” said assistant coach Cruz Hernandez.

Chavez knows what the team needs to do to not only win games but also win the division.

“In the end, we know we need to score a lot more goals,” Chavez said.

Pierce College will play Moorpark on Tuesday Oct. 27 at 4 p.m.