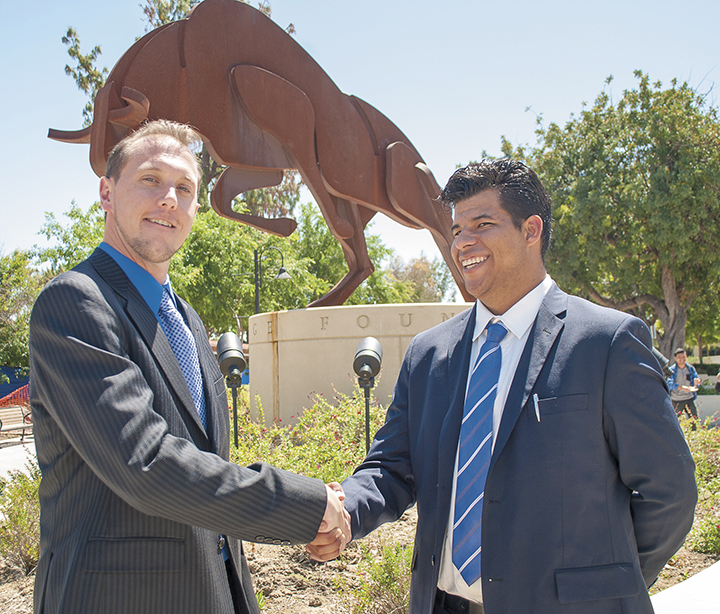 Immediately following the inauguration of Milo Anderson as L.A. Community College District student trustee on Nov. 4, his former opponent Ryan Navarrete of L.A. Trade Technical College announced his intent to have him recalled.

Anderson was elected student trustee in September and was sworn in on Wednesday, Nov. 4, at the Board of Trustees meeting at East L.A. Community College. Navarrete announced that he had collected enough signatures to force a vote on whether to have Anderson removed from the position. He cited low voter turnout as the reason for the recall petition.

If approved, this would be the third student trustee election this year. Navarrete was initially declared the winner of the first election in April by a margin of only three votes out of 4,143 votes cast. That election was contested by Anderson, the results were discarded and a special election was held in September. Anderson won the second election, but only 879 valid votes were counted.

Anderson said he is unfazed by the news, and used the opportunity to highlight flaws in the rules’ wording.

“I’m not worried in the slightest,” Anderson said. “I’m actually grateful to him for it. He’s raising awareness about how badly the rules need to be fixed and he may even get more people interested in student representation in the process.”

“Petitions calling for the recall must be signed by 35 percent of the number of students voting in the previous Student Trustee election at all of the LACCD colleges,” according to the document.

To meet that 35 percent requirement, Navarrete would need 307 signatures for the board to agree to a recall election. He said he has 325 signatures so far, and will present them to the board once he has had them certified and confirms at least 307 are valid.

“I’m going to try to get a few more,” Navarrete said. “I received signatures from Pierce, Mission, ELAC, LATTC, LACC and Harbor.”

If the petition receives the required number of certified signatures, there will be a recall election in which students will vote on whether or not to recall Anderson from the position. The election will only have options for yes or no, it will not determine if Navarrete or anyone else will step in to fill the position. Board rule 21007 gives the Board of Trustees the sole responsibility of replacing a recalled candidate, and says the position can not be vacant for more than 60 days.

“If a Student Trustee position becomes vacant due to removal, recall, resignation, or other reason, a successor shall be appointed by the Board of Trustees,” according to board rule 21007. “The Board shall either order an election or make a provisional appointment to fill the vacancy within 60 days.”

The recall petition is strongly opposed by Gerson Liahut-Sanchez, External Affairs Senator for Region Seven of the Student Senate For California Community Colleges, the student government body at the statewide level. After the first election was nullified, it was Liahut-Sanchez who was appointed to fill the vacant position in the interim. He stepped down when Anderson was sworn in.

Liahut-Sanchez criticized both candidates for the drawn out process.

“It’s completely outrageous that both sides of the election, they’re just constantly submitting complaints about how things are done,” he said. “The position they’re running for – student trustee – is the representation of the students. And they’re going back and forth bickering about the concept of the position, and not actually doing it, or having the students in mind.”

Anderson said he is not paying attention to the petition and that “there are more important things to worry about.” He cited the current study being done by the Metro Transit Authority to determine the feasibility of offering free or discounted TAP cards to college students in Los Angeles.

It is not known when the recall election would be held if Navarrete’s motion is successful. He said he hopes it would be this semester, but that it may be in February when the spring semester begins.