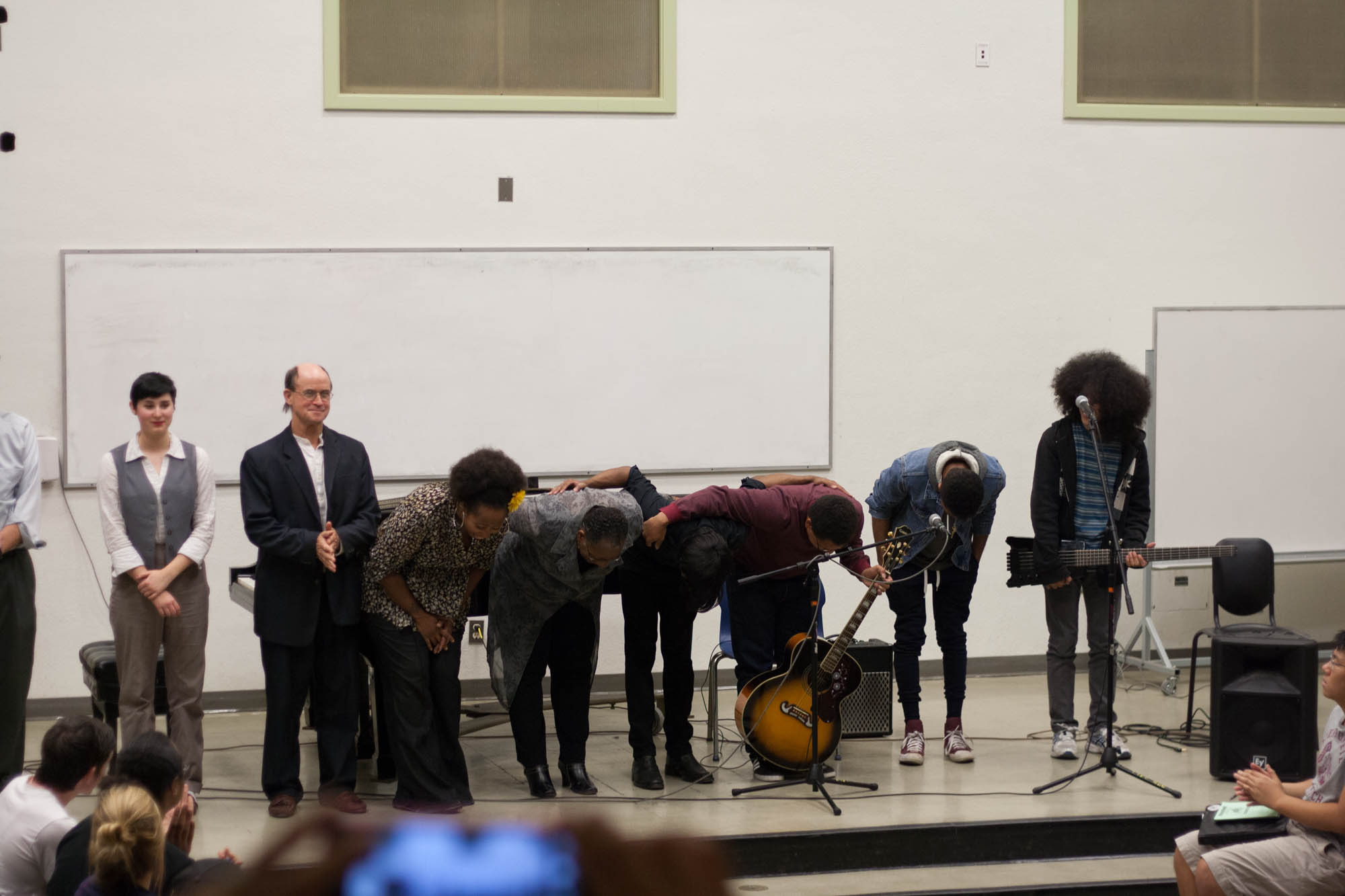 A staple of the Pierce College Thursday Concert Series, the student concert, brought out Pierce’s musically inclined to offer a sound of the campus.

Five acts made up the student concert, which was composed of a mixture of original and interpreted songs. Most of the performers, made up of students, faculty and locals, are veteran guests to the concert series.

Faculty member Frank Garvey and Stephanie Jones kicked things off with  Quincy Jones’ “Miss Celie’s Blues (Sister)”. The concert hall was temporarily transformed into a dim, smoky bar, as Garvey’s bluesy piano licks and Jones’ soulful tone set the mood. The duet made a soulful stamp to set the tone of the afternoon and got the audience comfortable and ready for more.

Jay Lawton and Priscilla Taylor brought the tone up to a light and playful level with their rendition of Paul Hindemith’s first movement of “Flute Sonata”. A stark contrast from the sultry blues before, Taylor’s classical piano and Lawton’s fluttering flute briefly suspended the reality of the chilly weather outside and brought the concert hall into an early and flourishing spring.

The only first-time performer at this student concert was Gwendolyn Kudra Billings, who delighted the audience with an original song called “Hounds & Hunters” in which she showcased her ukulele skills. The indie, non-traditional ukulele music was an insightful take on popular folk music.

“I’ve had other performances, but this is my first time playing in a [setting] like this,” Billings said.

Billings’ soft tones and delicate tunes were a charming addition to the afternoon.

David Durrani, who always bring original songs to the student concerts, took the stage with the confidence one would expect from a practicing musician. His original this time, “Fatal Attractions” was bold and emotional; typical of Durrani’s style. Durrani’s powerful voice and enthusiastic guitar playing could easily fill a large audience, unamplified.

This performance, however, was amplified. It made for the loudest performance of the concert. You could tell, this was how Durrani liked it, and if the nodding heads and subtle foot stomps of the audience were an indication, they agreed with Durrani.

Taylor, who played with Lawton earlier, returned to the stage with Bruce Salyer on saxophone to perform two movements from Jacques Ibert’s “Concertino Da Camera”, which Salyer noted is easily the most requested classical saxophone piece there is. This is due to its unusual and experimental nature. During the piece, Salyer actually plays his saxaphone into Taylor’s piano, creating an ominous echo of his notes.

It was certainly the most unique performance of the afternoon, lending sounds unfamiliar to most people. It was an off-the-wall visual experience as well. It’s safe to say that watching someone contort their body to play a saxophone almost upside down into an open piano, isn’t an everyday sight.

Garvey returned to the piano, this time accompanied by Donna Hermans, vocally. The duet recreated Arthur Hamilton’s “Cry Me a River” to bring it all back to the blues. Hermans belted out the R&B classic while Garvey demonstrated his previously verified blues-piano skills.

Rounding off the concer was Curve. A Three piece band made up of Pierce students Robert Bryant, Sean Boute, and Gemi Akito Taylor. The trio performed their original R&B song, “Maybe Tomorrow” with Boute on guitar and vocals, Akito-Taylor on bass, and Bryant leading the vocals. Bryant’s emotional and powerful vocals reverberated off the walls of the concert hall to create a moving experience. Bryant’s animated facial and bodily expressions made his emotional connection to the music evident and even more powerful.

James Bergman, professor of music history, noted before the concert began that the student concerts bring in the most diverse audience of the concert series. If you missed this one, don’t beat yourself up, because a second one is taking place Dec. 3.

The Pierce College Thursday Concert Series returns with Christopher Roberts performing a medley of gu qin music on Nov. 19. at 12:45 in PAB 3500.