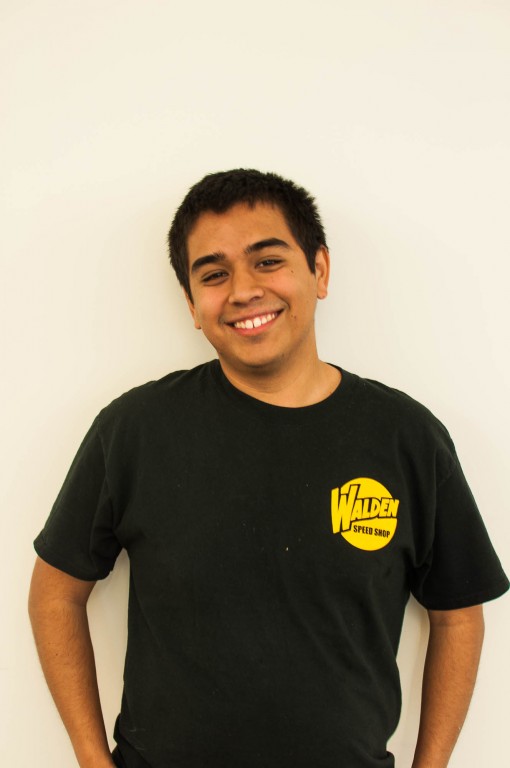 Huddled loosely together with friends in the Associated Student Organization building, George Alexander Saggeth, 20, juggles a lively conversation with studying for his next class.

At a young age, the French native began to create artwork and through his creative outlet aids him on his journey through adulthood.

When Saggeth turned 6 years old his family left France to move to Southern California. He lived in Downey with his mother before moving to the San Fernando Valley with his dad.

“Things in my life  came up where I needed money and I needed to figure it out so I just started to do it,” Saggeth said.With his options limited, Saggeth decided to sell select sculptures he had made over the weekends when he spent with his father and grandmother.

“My grandma would have yard sales so I would sell them there,” Saggeth said. “People started to notice it and they asked me to do things for them and it went from there.”

The money Saggeth made from selling his artwork helped the young artist finance his studies and projects.  Saggeth was able to purchase a house.

Apart from creating art Saggeth is passionate about computer sciences which he showcases by making programs for others.  Each piece he sells varies and continues to fund him for future projects. The cost of his supplies can vary from $40 to $1,000.

Through his artwork he has made a great deal of people happy although Saggeth modestly believes otherwise.

“In my own opinion my artwork kinda sucks but people like it so who cares,” Saggeth said.

Saggeth gets his inspiration from events and artist that he attends. He’s attended Monsterpalooza,  The Child of Monsterpalooza and other art galleries in Pasadena.

“For two years now. I’ll ask him and he does talk to me about some of his work,” Josh Castro said.  “It’s an interesting take on what he thinks about different things. Just a different thing that a lot of people in college normally don’t do.”

While art will always be an important part of his day to day life, Saggeth has made school his top priority. His main goal is to complete his general education plan with Pierce. From there the possibilities are endless.

Of the possible.  He hopes to one day join Blizzard the company known for popular games such as Hearthstone, Starcraft, World of Warcraft, and much more.

According to Saggeth, he believed he was “a bad artist, bad writer, bad everything.” His friends however, would argue otherwise.

Whenever he has a moment to relax Saggeth can be found unwinding with friends or playing video games. Public relations major, Jared Henderson has known Saggeth for over year.

In the time since they have met, Henderson has grown accustomed to Saggeth’s relaxed personality.

“We go to Shakey’s sometimes,” Henderson said.  “We go out for wings on Tuesdays or go to movies. We just hang out.”

Between working on his art, doing homework, and taking care of his family Saggeth also takes time to participate in charity walks to bring awareness to illnesses that affect others. Saggeth tries to be there around for everyone in his life.

“He’s always willing to help a friend,” Castro said.  “If he sees if he can help he’ll help.  He is very ambitious which is something rare that you don’t see very much today.”