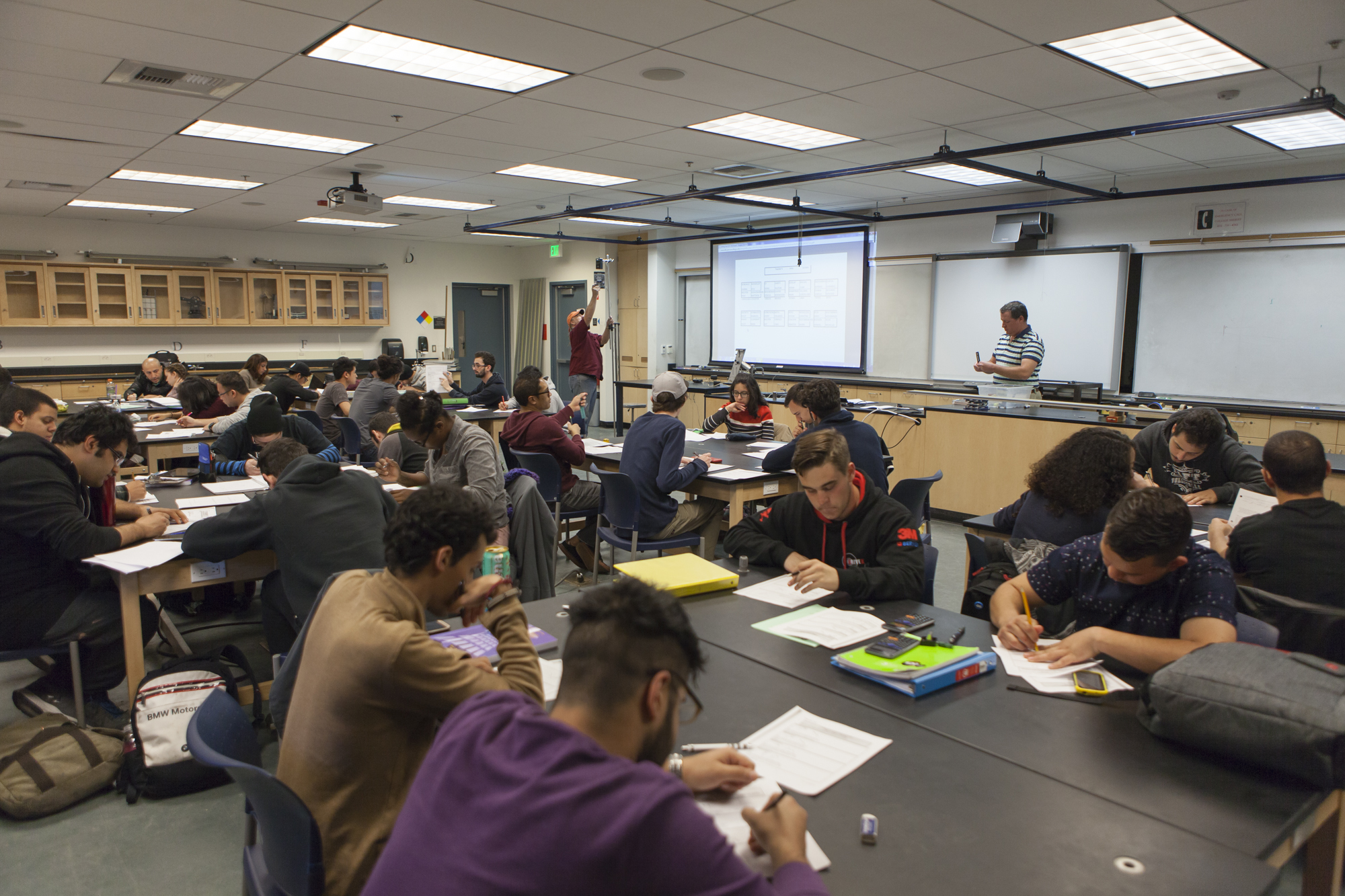 Professors at the Center for the Sciences are frustrated that only three of the 29 classrooms currently have fully functioning audiovisual equipment, according to Dale Fields, department chair of Physics and Planetary Sciences.

The 109,000 square feet Center for the Sciences, which opened in 2010, features 22 labs and six lecture rooms. This all cost $57 million to build. Fields says the equipment has been fading out of service for the past three years.

The audiovisual equipment installed deviated from the district standard. This played a role in it not being properly maintained, according to an email from Vice President of Administrative Services Rolf Schleicher.

“The procurement of the Crestron AV System was not inclusive of the typical audiovisual maintenance contract and therefore, the servicing vendor, A+ Interactive, did not appropriately service the equipment at the required maintenance intervals,” Schleicher wrote.

The majority of the malfunctions involve projectors and SMART Boards. The latter being devices that allow you to project images from a computer onto the board and interact with them. Chemistry Professor, Izzy Goodman says the equipment was cutting edge when it was purchased and the instructors have become accustomed to using it.

“I think most of the people in this building, if not all of them, walk into the classroom expecting to be able to have a projected image from a computer in front of the classroom,” Goodman said.  “And if we don’t, then we’ve got to go to a whiteboard, which is a dramatic difference from what we have planned in terms of visuals.“

All six rooms used by the Physics and Planetary Sciences departments have equipment that does not work. In addition, the Planetarium has a broken projector that has not been fixed for two years, according to Fields.

Fields says Pierce is the premiere science school in the district, but the teachers are not able to instruct to their potential and the students are not having as enriching an experience as they should.

“When the system works it is magnificent. It is beautiful,” Fields said. “I love using this system when it works, but for instance, the astronomy lab room has been dead for about a year. It doesn’t have technology functioning in it, period. There is no way to do any kind of presentation.”

There is currently a contract in place with Collaboration Solutions Inc. to repair malfunctioning audiovisual equipment, but the work orders must first be submitted to Information Technology (IT) who have a disturbing pattern of not responding, according to Laurence Thouin, department chair of Life Sciences.

“Work orders fall into a black hole and nothing happens and you cannot do that with faculty members who do not have projection capabilities,” Thouin said. “One room is really particularly troublesome because there is no projection at all and we have had work orders in for months. Why it could not have been fixed during break or last semester is beyond me.”

Information Technology Manager Mark Henderson says there is only one employee to fix audiovisual equipment on campus and he does not have the expertise to troubleshoot the complex Creston systems that were installed. The most he can do is change bulbs in projectors. Almost everything else needs to be outsourced.

“I give all the work orders to the one person and he methodically goes through them,” Henderson said.

Henderson says he has been submitting proposals to hire more staff every year for the 10 years he has been working here, but is optimistic that will change soon.

“Historically IT and media stuff has always been last, but now since we have been having all of these issues it is starting to be first,” Henderson said. “This is the year now that we are going to hire more staff.”

Thouin says faculty is being left in the dark on much of what is being done to fix the equipment in the Center for the Sciences.

“We are never really given the whole truth,” Thouin said. “It is always like we are given enough information to make you satisfied but then you walk away saying ‘what did you just say.’”

Henderson says there are discussions in a shared governance format and groups on campus have a representative present, but he does not know how much of that information is shared back with the groups.

“It is not like we are operating in secret,” Henderson said. “We have been in deficit staffing and funding for quite some time. we have had competing priorities. That gets shared out.”

In the fall of 2015 Pierce College selected Lassen Associates Inc. to conduct an assessment of the audiovisual equipment to assist Pierce in selecting a vendor. The candidates were Creston, Utelogy and Extron.

Lassen Associates Inc. concluded that Utelogy is the best option of the three. The findings in their assessment, dated dated Nov. 7, 2015, state that Utelogy will be the most efficient to maintain and require less reliance on outside vendors than the other candidates. As a result of the findings, Pierce College will be moving to a Utelogy platform and changing the technology in the Centers for the Sciences over the next few years, according to Schleicher.

“We recognize that our IT needs continue to grow and we are committed to fixing our infrastructure problems,” Schleicher wrote. “ Pierce is on the right track and in time will have one of the best platforms for delivering our required services. We continue to make measureable progress in finally securing the funding and support we need to more appropriately service the campus.”

Henderson hopes Utelogy will begin to be implemented in a few months but there are budgetary issues that need to be worked out first.

“The AV [Smart Classroom] Task Force has selected Utelogy as our baseline and it is going to deployed as we move forward,” Henderson said. “It is going in our newly constructed areas and then it is going to be retrofitted into the Center for the Sciences.”

Lassen Associates met on Oct 7, 2015 with members of the Pierce College Smart Classroom Task Force who identified several issues with the current setup of the audiovisual equipment. These included the need for the audiovisual equipment to be standardized across all rooms and that instructions are not provided in most rooms, according to the Lassen Associates Inc. assessment.

“Features that were requested by IT support staff such as remote control of a room, setting up custom interfaces for specialized rooms and installing software upgrades are much easier to manage using Utelogy as compared to the other options,” wrote Lassen Associates Inc.

In addition to being the most efficient to maintain, the Lassen Associates Inc. assessment says that Utelogy is the best system to keep up with advancements as well.

“Finally, as the most scalable and flexible solution, Utelogy is the most likely system to support A/V trends in the future,” wrote Lassen Associates Inc. “As more endpoint devices become IP based, additional features can be added through advancements in the software without the need to reprogram switchers through a vendor or the purchase of new hardware.”

Henderson believes the Utelogy platform will be easier to maintain in house.

“I’m looking forward to that” the creston to Utelogy switch,” Henderson said. “We should be able to handle a lot of it internally along with getting the additional staff that is really specific to supporting smart classrooms and AV equipment.”

Lyn Clark, chair of Pierce College Council and first vice president of the Academic Senate, says the college is working hard to improve the situation.

“It is a continuing problem right now and everybody is aware of it. We are trying to do the best we can,” Clark said. “I’ve suggested we do some stopgap measures and they’re looking into doing things.They are already on it, they are aware of it.”

“We continue to make measureable progress in finally securing the funding and support we need to more appropriately service the campus,” Schleicher wrote.

Henderson is optimistic about the future since the college is beginning to address the issues and give higher priority to the technology on campus.

“I understand everybody is frustrated, nobody is more frustrated than I am, because historically I have been requesting a lot of the same support services for our two departments,” Henderson said. Recently we have started to put greater investment in Information Technology and the Media Center. Going forward, we are looking good, but right now, this is where we are.”

The issue is problematic because it is not isolated to only one department. The sciences likely rely on technology more than any other discipline on campus. Scientists are problem solvers by nature and it is frustrating to not be able to fix the equipment, according to Fields.

“Folks just don’t know the sheer extent of the problems we have been having,” Fields said. “All of the things that have been going on and this is what we have been dealing with the past several years.”