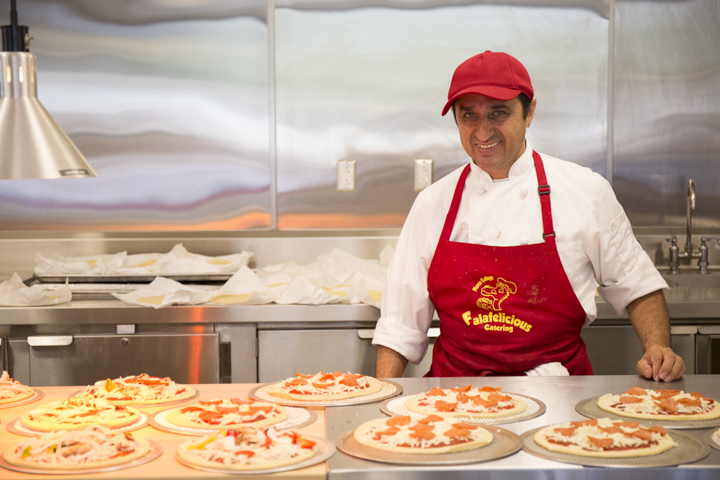 The smell of freshly baked pizza in a fully air-conditioned cafeteria brought many students to the opening of the new food court on Tuesday, Sept. 6.

Falafelicious Catering is the new vendor of the food court, which provides a huge selection of food, from fresh pizza to salads.

Falafelicious Catering owner Ofir Bass, thought the grand opening and the first week was a success.

“It’s better than I expected, and I expected it to be great,” Bass said about the food court’s first week of business.

“People are responding well so far. Everybody’s happy that they finally have a place to eat and sit down, and they’re not sitting outside in the heat or in the rain.”

Pierce College President, Kathleen Burke said she was happy to have more food options available for students and staff other than just having the food trucks and the cafe on campus.

“[The food court] took so long to open up because we had to go through the process and interview the candidates and then bring it to the Board of Trustees for approval,” Burke said. “So we couldn’t do anything until the board approved it.”

Jared Henderson, public relations major, first attended Pierce College three years ago and said he had been waiting for a food court since then.

“I kept hearing that it would be here soon. I was wondering if it was ever going to show up,” Henderson said.

Students and faculty alike had been waiting for the food court to open for years.

“But for what it is, it was definitely worth the wait. The food here is well prepared. There’s a lot of different options for a lot of different people,” Henderson said. “Hot options, cold options, quick snacks for those who just need something to grab along the way.”

According to Bass, the building he acquired for the food court has a specific kitchen layout for specific types of cuisines, which is why the food court currently serves Italian and Mexican food. He also wanted to expand the variety of food options students previously had.

Two of the five food stations in the food court are in operation. Bass has plans to eventually utilize the three empty stations, which would also mean expanding the current menus.

According to Bass, he and his employees have been asking students what other foods they would like to see sold in the food court in an effort to accommodate more diets.

“We noticed that there is a big vegan community here, so we’re going to want to come up with some vegan options,” Bass said. “I was a vegetarian myself most of my life so I understand the need.”

According to Vice President of Administrative Services Rolf Schleicher, the new food court not only helps students by giving them affordable food but also helps them stay on campus and not have to get back in their cars and find parking again when they come back.

Associate Vice President Larry Kraus says he expects that having a food court on campus will boost morale substantially.

“We need healthy minds and healthy foods to be successful,” Kraus said.

According to Kraus, the school had to go through a Request for Proposals (RFP), in which potential vendors submitted biddings which were narrowed down and reviewed by an evaluative task force compiled of students, faculty, and staff.

Bass said his catering company was fortunate enough to check all the boxes Pierce College was looking for.

The food court is planning to create a wall for students to add their art, according to Bass.

“I’d thought it be nice to have a lot of pictures of the school,” Bass said. “It’d be a nice edition to the food court.”

According to Bass, it’s not finalized yet, it’s just an idea for future projects.

Aside from being an alternative place to eat at, the food court has provided students with a spot to study and socialize.

“I love it actually. I think it’s great that there’s a place to sit down with air conditioning,” Mota said. “My class is here in the science building and I don’t have to walk all the way down [to the food trucks] in the heat.”

According to Kraus, the contract with Falafelicious Catering is a yearly contract that is good for up to five years.

The food court is located under the Library/Learning Crossroads, directly across the Center for the Sciences. The hours of operation are Monday through Thursday 7 a.m. to 9 p.m. and Fridays 7 a.m. to 3 p.m.