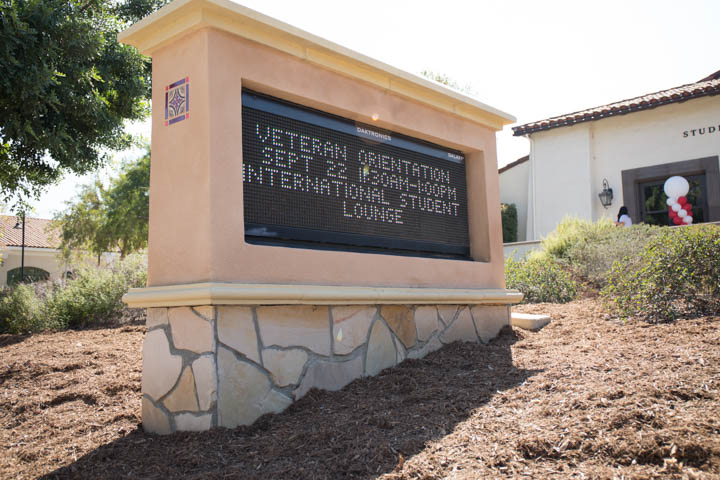 The marquee in front of the Great Hall has been providing information on events from the fall 2015 semester. Currently on display are reminders for an October Club Rush and the Student Trustee elections, both from more than a year ago.

This particular electronic sign is operated by the Associated Students Organization to promote on-campus events.

Barbara Lombrano, the president of the ASO, said that she is aware of the problem but neither her nor her advisers are able to update the information at this time.

“We are aware,” Lombrano said. “We do not own that marquee. However, in the past our ASO adviser had access to put information on it.”

Curtis Smith is a Student Services Specialist and a former ASO adviser. He has worked with the marquee in the past and is familiar with how the system works.

According the Smith, the computer has a Venus Software that sets up a remote session with a computer located in north of the Mall, which has stopped working.

The marquee on the Mall is not able to be updated due to ineffective computers in the North of Mall. Associate Vice President Larry Kraus said that it might be a problem accessing it due to construction.

The marquee was turned off from a power breaker for most of last semester, but was turned on at the start of this semester.

“They [Plant facilities and Information Technology] were able to find out that the breaker is in the electrical room in the old library [which is] connected up to IT,” Smith said.

Lombrano would like to see the screen updated or at least turned off so that wrong information isn’t posted misleading students and faculty.

“I would personally like to see the campus IT or whoever put some sort of covering over it until it is going to be fixed,” Lombrano said.

The current ASO adviser Juan Carlos Astorga, dean of student engagement, would like to gain access to the marquee again to promote on-campus events for the fall.

“It’s our goal that that becomes a real opportunity to engage students to invite them to activities, events, meetings, concerts and seminars,” Astorga said. “I think we are really losing a wonderful opportunity to benefit from that marquee in the same way we are able to use the one that is [on Winnetka and Victory]. Unless you’re driving by, you won’t notice it. But this one, whether you want to or not, you look up and you see it.”

Unlike the marquee on the Mall, the large one on the corner of Victory and Winnetka is displaying accurate information. The information is updated by Pierce College Public Relations Manager, Doreen Clay.

Clay said that if the marquee she controls were to stop working, she would have it worked on the same day.

“Absolutely, I’d have it down within that day,” Clay said.

The sooner the ASO obtains access to the marquee, the better it is to end false information, according to Astorga.
“I am hopeful that we can get that fixed sooner rather than later because at some point, people are going to tune it out and they are not going to pay attention because it is outdated information,” Astorga said.